From the services we need to stay safe to the parks we need for quality of life and play, the city budget has it all.

Wichita's budget is around $600 million per year — roughly $1,500 per person per year. With that money, the city pays for public safety, water service and special projects like parks, new roadways and improvement districts.

"The City of Wichita is what we call a full-service city, so we have water and sewer utilities, we have an airport, we have a police department and a fire department, we have a public works department that maintains our infrastructure and our streets, we provide park and recreation services and a variety of other services," says Mark Manning, budget officer for the City of Wichita. "We do just about everything."

With everything that's included, the city budget is probably the most important document the city council approves each year. It shows us how the next year will operate, where city priorities lie and whether or not we have enough money for a new park or project. And none of that is possible without revenue — roughly half of which comes from taxes.

In this article, we're going to focus on digging a little deeper into the city budget and how we fund it — mainly through taxes.

If you're one of these people, you may want to stop reading now.

The City of Wichita essentially has two taxation sources: property tax and sales tax. Things like sewer, water, the airport and city golf courses also provide a non-tax revenue stream, which covers roughly half of the total revenue collected by the city.

While Wichita doesn't have a sales tax of its own, the city gets a portion of the Sedgwick County sales tax and special state taxes like the motor vehicle tax, gasoline tax and alcohol tax. All of these go to the state before they are distributed back to individual cities.

If you divide that by days, it's a little over a dollar a day.Mark Manning

Property taxes are raised and lowered based on the valuation of your home and the mill levy.

From there, the mill levy would determine the percentage you pay in taxes for that assessed valuation. Currently, the Wichita mill levy is around 32. So you'd multiply $11,500 by 0.032 to get about $386 in property tax you would pay per year.

"Which we think is a pretty good deal," Manning says. "I mean, if you divide that by days, it's a little over a dollar a day."

If you look at other cities, $386 really is a good deal. In the Wichita Metropolitan Statistical Area (MSA), there are 56 total cities. Of those cities, only five have lower mill levies than Wichita.

Only nine of Kansas' 25 larger cities of the first class — as determined by population — have lower rates than Wichita. And all of those cities have additional revenue coming in through sales taxes. 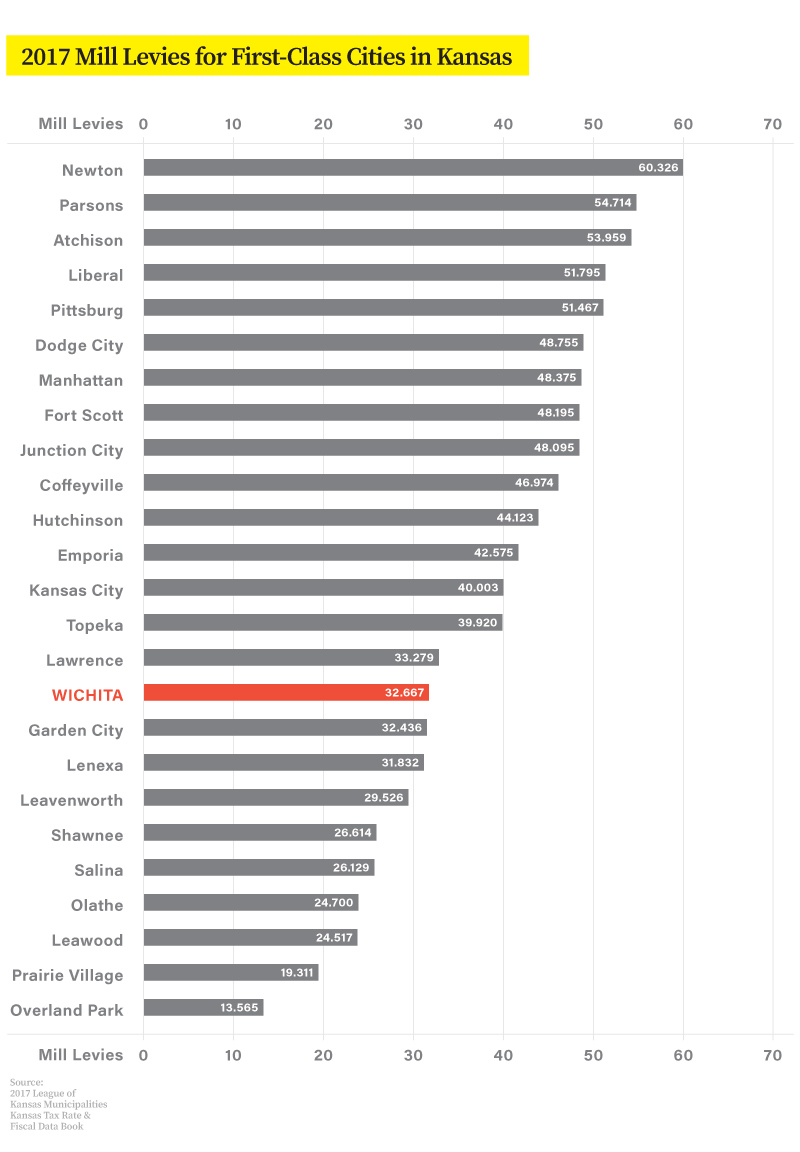 "Every single city on this list except for the City of Wichita and the City of Newton have a city sales tax," Manning says. "They have an additional source of revenue that we don't have, so our mill levy is the tenth-lowest of the big cities in the state, and we don't have the revenue stream that most of the other cities have."

While property taxes are pretty much a given in Kansas, sales taxes have to be placed on the ballot — either by city council or a petition — and voted on by citizens.

A city sales tax has never been passed in the City of Wichita in our entire history.Mark Manning

Cities can implement up to a 3 percent sales tax — 2 percent for any purpose and 1 percent for very specific purposes. For example, Derby has a 0.5 percent city sales tax, which puts its total sales tax up to 8 percent. Wichita's is 7.5 percent without that local tax. Additionally, Derby's property tax rate is 48 mills compared to Wichita's 32 mills.

Manning recalls three attempts in the past 40 years to pass a city sales tax in Wichita — less than one every decade. Sedgwick County passed two — one for the Intrust Bank Arena, and one for road improvement projects that is still in effect today. Wichita has passed zero.

Manning says that doesn't mean it's right or wrong. In his position, his role is to inform the council on fact, not persuade them on policy.

Policy decisions are ultimately up to voters, who can elect politicians who choose to put sales tax proposals on the ballot, or not. Then, it's up to the voters again to pass or reject those proposals.

Based on only three sales tax proposals in the past 40 years — and zero implemented sales taxes in the city's history — we seem to have made our policy preferences pretty clear.

If you ask anyone — the guy sitting next to you at the airport, the woman in front of you in line at the coffee shop, anyone — they'll likely tell you their taxes are too high.

And heck, we'd all like to pay less for things if we can. But you get what you pay for, and if we don't pay for quality services in our city, we won't get them.

When we take a look around at other cities, we're critically underfunded. Cedar Rapids, a city about a third of the size of Wichita, has a similar-sized budget of $516 million. That comes out to $3,935 per person per year.

Oklahoma City, a much larger city, funds about $2,450 per person per year.

Wichita only spends about $1,500 per person per year.

If we want top-notch public amenities, new, innovative projects, and a city that can hire quality talent from across the country, we may need to come to terms with the idea of more taxes. Other cities in direct competition with us pay more and get more.

Of course, taxes should never be increased without purpose or accountability, and each proposed increase deserves discussion. But often in Wichita, we shy away from that discussion.

The tax conversation in Wichita tends to be a bit one-sided. Advocacy groups from chambers of commerce to political boosters have entire platforms built on lowering taxes. Many of our top politicians were elected based on the promise to reduce taxes. Even politicians who see a need to raise taxes rarely bring it up for fear of losing the next election.

Taxes are not always good, and it's important that we hold our elected officials accountable for the money they allocate. But we can't have an honest discussion about taxes if we don't understand it or even talk about it.


HOW TO LEARN MORE

The topic of city taxes, expenditures and the budget is not a light one. Wichita's adopted budget itself is in two volumes with about 360 pages each.

But we can't let that stop us from learning more. For every budget passed by the city, discussions are open to the public and broadcasted on Channel 7. There are also budget workshops on city social media accounts, at district advisory board meetings and the final public council meeting where they pass the budget.

The budget exists online, or in paper form, at every city library and Wichita State University's library. It's also available at City Hall, where Manning says budget experts can walk people through the document.

The next budget process will start in March or April of this year, with a final budget slated to be adopted in August. Start thinking about what you'd like to see from your city, and be prepared to pay for it.