In every city across the United States and the world, there are people struggling with homelessness. Wichita isn't an exception. So what is the solution?

THE MANY EFFECTS OF HOMELESSNESS

In nearly every city across the world, there are people struggling with homelessness. Wichita isn't an exception.

The thing that makes this issue so complicated is that every single homeless person is homeless for different reasons. It could be a downturn in the economy, a bad divorce, a substance abuse problem, a mental health issue or any combination of any of these factors and more.

So what is the solution? Providing housing? Substance abuse programs? Mental health support?

Luella Sanders is the director of community impact with United Way of the Plains, but also the chair of the Sedgwick County Continuum of Care, which is the homeless crisis response system in Wichita. She says responding to homelessness is like a three-legged stool.

It has a ripple effect all the way through our community. Even if you don't personally know someone who is homeless, you're still being impacted by homelessness.Luella Sanders

"Education, income and health," she says. "They all seem to correlate with other issues, one impacts another, which will impact the third."

Similarly, homelessness impacts Wichita as a city in complex ways, among them how we are perceived, our workforce and our economy. The experience locals and visitors have with our homeless population shapes perceptions about our compassion for one another, the safety of our community and the prospects of success for those who live here. People who are homeless also encounter severe obstacles to gaining and maintaining employment. These perception and workforce issues can have real impacts on our local economy.

"When homelessness is more visible, it can impact businesses," Sanders says. "It impacts law enforcement; it impacts the jail system; it impacts the emergency rooms. ... It has a ripple effect all the way through our community. Even if you don't personally know someone who is homeless, you're still being impacted by homelessness."

So how are we dealing with the issue of homelessness in a way that addresses its impact on the community while also caring for the people actually experiencing it?

Homelessness doesn't just fall upon people with mental health or substance abuse problems. Many are going through some tough times.

"They're just like you and me," says Wichita Police Officer Nate Schwiethale. "I could give you stories where a ... nine-year [police] veteran became homeless. You know, stories of people having doctorate degrees who become homeless."

Schwiethale is a member of the Wichita Police Department's Homeless Outreach Team (HOT), which started in 2011, based off of a similar program in Colorado Springs.

Before HOT, Schwiethale says the response to homelessness was a vicious cycle of tickets and arrests. 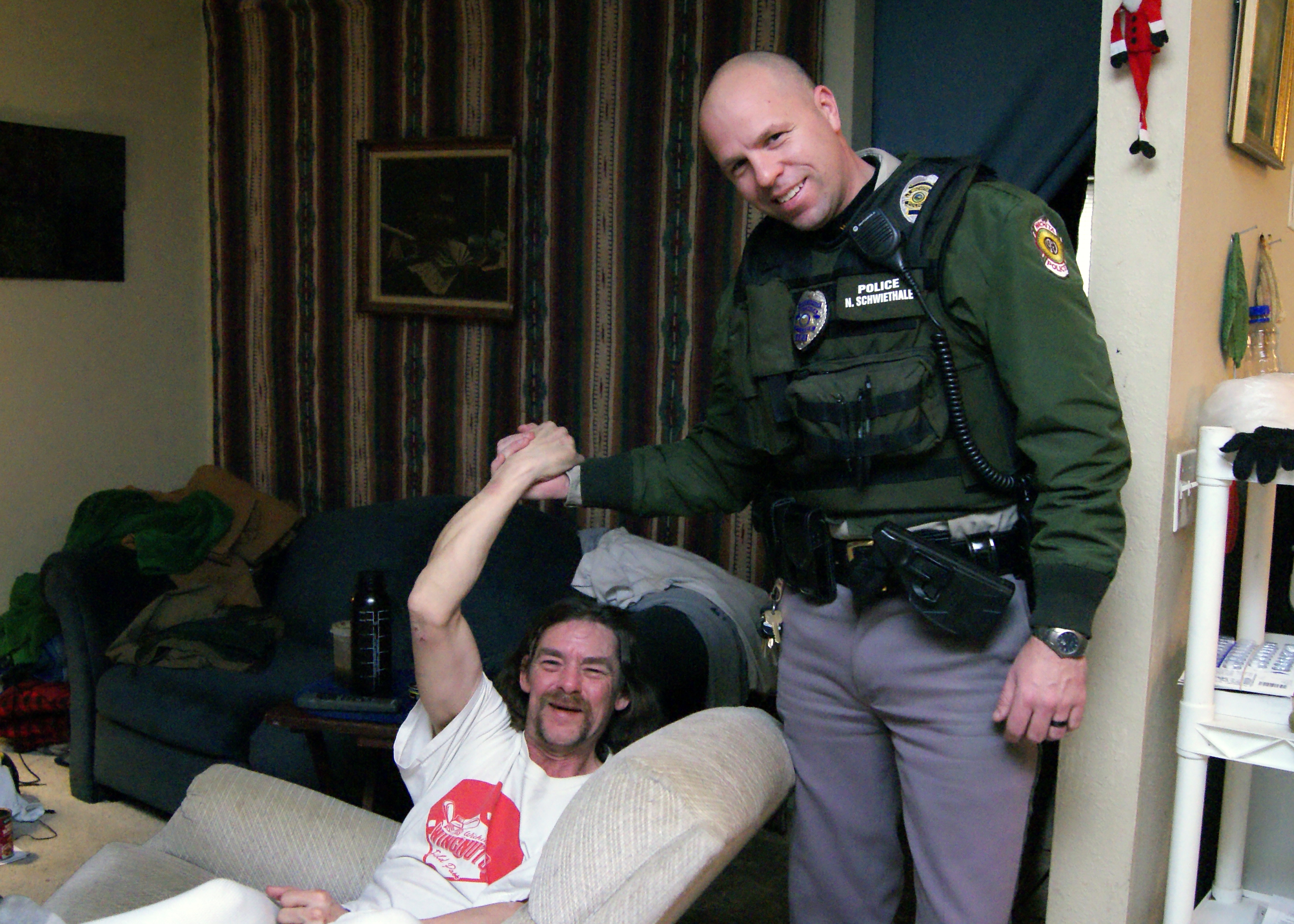 I could give you stories where a ... nine-year [police] veteran became homeless. You know, stories of people having doctorate degrees who become homeless.Nate Schwiethale

"So I found myself writing ... tickets to the same guys who couldn't pay it," he says. "They'd turn into warrants. I'd arrest them, take them to jail. They'd get out. They'd go back to the park, and do the same thing again. ... I did that five or six years as a patrol officer downtown, and I was like, 'Man, we gotta be doing something different.'"

Now, Schwiethale and other HOT officers work closely with the homeless population and social services to focus on solving problems rather than writing tickets and making arrests. Essentially, HOT has become a referral agency.

"The providers are all out there," he says. "We just refer and get the homeless connected to them."

Since it was started, HOT has helped more than 1,000 homeless Wichitans get back into permanent or transitional housing. Some of that is through HOT's Finding A Way Home program, which uses private donations to purchase bus tickets for transient homeless to get back to a home in another city or state.

"We noticed that a lot of homeless are transient and they had homes to go to — friends and families that are willing to take them in — but they lived in California, Florida, wherever, and they didn't have two or three hundred dollars for a bus ticket," Schwiethale says. "We'll verify to make sure they're not wanted [by law enforcement], and then we'll verify they have a home to go to. If they do have a home to go to, we'll buy them a ticket."

Schwiethale says HOT has met every performance measure since its founding, including those associated with the number of homeless housed and recidivism rates.

"You don't want to put someone into housing and then have them fail," he says. "So we try to connect them to case management to make sure they're successful."

To fully understand homelessness in Wichita, we have to know where we're coming from and how we compare with other cities.

Chronic homelessness, as defined by the U.S. Department of Housing and Urban Development (HUD), describes an unaccompanied person who has a disabling condition and has also been either continuously homeless for at least a year or has had at least four episodes of homelessness in the past three years.

Thanks to a growing economy, the WPD Homeless Outreach Team and an overall trend of reduced homelessness nationwide, Wichita's homeless population has drastically decreased from that high 2011 number.

Today, Schwiethale says there are about 571 people on the streets, but only about 33 are chronically homeless.

Compared with other peer cities, Wichita is doing pretty well when it comes to homeless population. As of the 2018 count, Des Moines had 764 homeless residents, Oklahoma City had 1,183 and Omaha had 1,411. Of these cities, only Wichita and Oklahoma City decreased their numbers between 2017 and 2018.

That being said, most cities around the country are also seeing decreases in homeless population, says Sanders.

"It is going down very gradually, but it is a downward trend," she says. "Even when some areas are going down enough to influence that trend, it doesn't mean that all states are experiencing that. California and New York are two of those states that have seen an increase."

"Affordable housing is an issue nationwide and it certainly is in Wichita," Sanders says. "There's no place in the United States, no state where a person making minimum wage can afford an apartment at a fair market rent value with only one wage earner in the household."

There's no place in the United States, no state where a person making minimum wage can afford an apartment at a fair market rent value with only one wage earner in the household.Luella Sanders

That being said, Sanders says Wichita hardly compares with cities like San Francisco or New York.

"[Wichita is] a small town," she says. "However, in Kansas, it serves a function as being the larger metropolitan area."

That means people will travel here thinking there are more jobs, more resources or family who can help them out.

"They hope they'll get their feet on the ground, that they'll find a place, and it goes slower than they think oftentimes," Sanders says.

Homelessness will likely always be present in modern society. But there are ways to mitigate its impact and help people get back on their feet.

From United Way of the Plains, Inter-Faith Ministries, the Salvation Army and Catholic Charities to the Wichita Children's Home, United Methodist Open Door, the Wichita Family Crisis Center and Center City, Wichita is not without quality services to assist those who can't find a place to live.

But this list of services can be daunting, both for people facing homelessness and for people wanting to donate money or time as a volunteer.

That's where HOT and Sedgwick County's Continuum of Care come in. Both help to refer homeless residents to services that fit their needs, while also spreading the word and helping direct resources from throughout the city.

Continuum of Care also conducts the annual point-in-time homeless count, tracking our numbers while also surveying homeless residents to find out how their needs are being met.

"There's a lot of ways to be involved," Sanders says. "The United Way of the Plains operates a 2-1-1 information referral line. Anyone can dial 2-1-1 and get access to resources. They also can get access to volunteer opportunities through the volunteer center."

Both Sanders and Schwiethale say giving out spare change to panhandlers is not the most effective way to help homeless Wichitans. Sanders says many panhandlers are not actually homeless.

"They might have a sign that says they just need money for food or that they're homeless," she says. "The reality is, the majority of folks that are pan handling are not homeless."

Schwiethale says even if they were homeless, nearly all of their needs are met by local services.

There's a study out there that showed that 93 percent of money given to panhandlers goes to drugs, alcohol and tobacco.Nate Schwiethale

Panhandling is actually protected by the First Amendment. It's only illegal if panhandlers are impeding traffic. But Schwiethale and Sanders agree that money given to panhandlers could go much further if it's given to service providers instead.

To learn more about homelessness in Wichita, or to get involved, the United Way of the Plains website is a good place to start. You can also start by simply programming the volunteer hotline — 2-1-1 — and the HOT number — (316) 854-3013 — into your phone. You can also download the HOT brochure to learn more.

Showing compassion and helping others in need are things we should all expect from our community, and our ideas of being neighborly should extend even to those who don't have permanent shelter. If we can continue to find ways to help those facing homelessness, we strengthen not only our economy and the work of our social institutions, but also our city's social fabric.