Whether it’s a new development in the city's core, or attracting new businesses and jobs, private-public partnerships are often behind some of Wichita’s best moments.

Watch this short video to learn more about how private-public partnerships work in Wichita.


'A WIN-WIN FOR EVERYONE'


What are private-public partnerships?

Put simply, private-public partnerships take place any time a private business, organization or individual works alongside the government, mostly to create jobs, open up opportunities for new businesses or bring about higher quality life for the benefit of everyone in a specific area.

"The theory is that it's a win-win for everyone," says Jason Gregory, executive vice president of the Wichita Downtown Development Corporation (WDDC), an organization founded by Wichita property owners concerned with the trajectory of downtown. "We get up every day and try to figure out how to move downtown forward."

When partnerships are successful, businesses benefit because they save cost and headache in getting established in Wichita. The government benefits by having more businesses paying into the tax base, allowing for improvements that benefit everyday Wichitans.

"We are, as a governmental entity, charged with collecting tax dollars and spending those in the most efficient, most beneficial way, for our community," says Janet Miller, who represents District VI in the Wichita City Council. "We cannot do it all with those tax dollars. ... When we work together [with the private sector], we end up with a better product, a better thing, a better process, than we would have if we had tried to do it individually on our own."

When successful, the private and public sectors benefit, and so do we as everyday Wichitans. 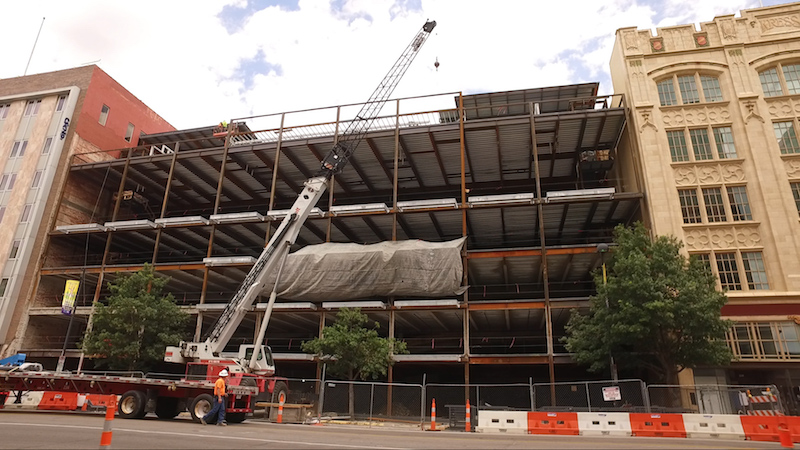 How do these partnerships work in Wichita?

"I think they work quite well," says Jeff Fluhr, president of the Greater Wichita Partnership (the Partnership), an organization founded by private businesses that works to align resources from the private and public sectors to stimulate the regional economy.

Fluhr says that communities showing economic growth, and a promising future, are communicating well — they have a vision for what they want to achieve, and they have concrete steps that will lead them there.

In Wichita, these conversations oftentimes go through the Partnership, which also encompasses Gregory's WDDC. Those conversations then lead to projects, which, when completed, often lead to more projects and an overall greater tax base for the City of Wichita.

Recently, partnerships have shown themselves all over the city, especially in the downtown area. The Pop-Up Urban Park turned an abandoned space into a park where downtowners can visit local food trucks over the lunch hour. Developers have also worked with the city to improve the Union Station area.

Parking garages are also common projects between the private and public sectors. The garage behind the Ambassador Hotel near Douglas and Broadway was built by the city, and quickly attracted the new Kansas Leadership Center.

When Cargill considered moving its 800-plus employees out of Wichita, a deal was struck over a parking garage that would serve Cargill's future downtown space. This partnership serves not only the business, like a cash incentive would, but anyone who wishes to park in the Wichita downtown.

More projects are in the works, as well. And they run the gamut as far as where and how these partnerships can work.

For example, the City of Wichita recently agreed to lend hundreds of thousands of dollars to a developer to help turn a dilapidated parking garage on Broadway into new downtown apartments.

Last year, the city also agreed to borrow money from a private company to help pay for some of its water and sewer infrastructure needs.

Sedgwick County is also often involved in these partnerships. Earlier this year, the county agreed to the creation of a non-profit organization that would help support fundraising needs for Sedgwick County's mental health agency, Comcare.

Certainly, companies want to be in a thriving city. Public investment in our museums is critical. ... I think public-private partnerships allow us that opportunity to have a distinctive city.

There are also quality-of-life investments, like the Sedgwick County Zoo, Botanica Wichita or the Wichita Art Museum, which have long been attractions for visitors and locals alike. Even though these seem less important than investing in keeping hundreds of employees in your city, or spurring development downtown, these investments often lead to economic growth just the same.

"Certainly, companies want to be in a thriving city," Fluhr says. "Public investment in our museums is critical. ... I think public-private partnerships allow us that opportunity to have a distinctive city."

Ultimately, Miller says Wichita will succeed as long as the private sector, public sector, organizations and individuals are willing to invest in the city.

"There are so many corporate partners, individuals, philanthropic entities in Wichita that are taking pride again in our community and they want to help it recover, to grow strong, to become what it really can be," she says. "We've been very fortunate over the past few years of seeing a resurgence of that pride and of that wanting to give back. ... That's going to be very important for the future of Wichita."