The unemployment rate in Wichita has been a rollercoaster and remains the highest in Kansas. Why is that and what does that mean for the future of our city?

If you regularly consume news, you’ll likely come across a monthly jobs report sharing how many people are currently unemployed and projections for the future. For decades, the unemployment rate has been used as a barometer to determine the overall economic health of nations, states and cities. For Wichita, the past 18 months have been a rollercoaster. But what do these numbers really mean for our city? 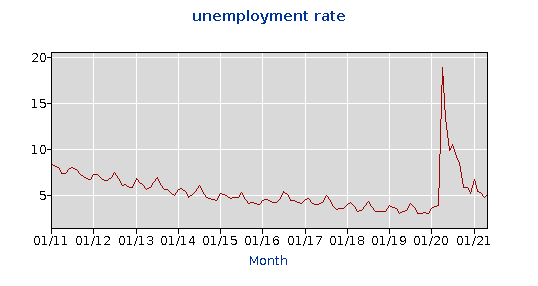 “January [2020] was when Spirit announced that they were laying people off because of the 737 MAX,” shared Keith Lawing, president and CEO of Workforce Alliance of South Central Kansas. “But we had such demand for jobs. If you wanted to work and you just got laid off, there were many job opportunities within manufacturing and other aviation areas and roles. But then COVID[-19] hit and all bets were off.”

The pandemic began right as the 737 Max layoffs went into effect, leading to an increase in the unemployment rate from 3.9% to 19% in April alone. As vaccinations have rolled out and businesses have been able to reopen, unemployment has declined. But Wichita and Sedgwick County’s jobless rates remain the highest in the state of Kansas – a statistic Lawing says is standard.

“Historically, we run higher than the state [unemployment] average overall,” said Lawing. “So if the state is at 3% unemployment rate, we're usually a point or two above that. It's just very typical for us because of the industry mix. We're so heavily vested in aviation, that when there’s a downturn in the economy, it affects us more.”

The pandemic was unbiased in its assault on employment. It affected virtually every industry. Businesses were forced to close or get creative. Virtual work environments, drive-thru and delivery options and online sales all shifted the focus of entire companies on the fly. But now that restrictions have been lifted and production begins to ramp up, a new problem has arisen.

Drive down any street in Wichita and you’ll be bombarded with “Now Hiring” and “Help Wanted” signs. While consumer demand has increased, the workforce supply hasn’t. Job openings are at an all-time high.

"The hospitality industry, restaurants and other areas are very much struggling,” shared Lawing. “Those aviation companies that had to lay people off in 2020 are trying to recall people. They're trying to build back up. And yes, some people are very anxious. Some people have been waiting for that recall. But some people are saying no.”

According to Lawing, there are many factors playing into this shortage. Some people have not found job opportunities that can provide them as much income as the expanded benefits they received while unemployed. A large number from the Baby Boomer generation chose to retire instead of returning to work. Many Wichitans have used the pandemic to assess their working situation and enter training programs or educational institutions to improve their skills. This includes the hundreds of Wichita residents who enrolled in the federal Trade Adjustment Assistance program, which was temporarily amended to include those affected by layoffs related to COVID-19.

What we've just gone through in the last year has heightened that desire to get a job that offers you healthcare benefits.Keith Lawing

“The fact remains that we have employers that are struggling,” added Lawing. “We do not have enough job seekers to fill the open positions and employers are not seeing enough applicants for the jobs they've posted.”

Along with plastering openings on job sites, marquees and business entrances, local companies are finding other ways to recruit candidates. For example, Lawing noted that Ascension Via Christi, one of Wichita’s largest healthcare providers, has increased their signing bonus offerings. Part-time work, flexible scheduling and work from home options are also becoming popular to accommodate better work-life balance, especially for parents who are trying to juggle employment and child care duties.

“Employers that are offering healthcare benefits are having less of a struggle in bringing workers back,” stated Lawing. “I think some workers are trying to look for benefits in addition to a salary. What we've just gone through in the last year has heightened that desire to get a job that offers you healthcare benefits. COVID-19 has made employers look differently at their workforce, how they value them and what it's really going to take to be an employer of choice. I think workers are going to be more selective than they have been in the past.”

Since February, Wichita’s unemployment numbers have continued to hover around the 5% mark. This may seem low in comparison to 19% during April of last year, but Wichita has not had this consistently high of a rate since 2015. But Lawing believes our city is set up for resurgence.

“I think we're much better positioned now in 2021 as a community than we were in 2012-2013 for an economic rebound,” said Lawing. “People are going start flying again quicker than they did after the Great Recession, and we now have other companies outside of aviation, like Novacoast and NetApp, that need talent and skills. So we have to be deliberate and we have to be intentional in recruiting and retaining talent.”

Wichita 2020: In the Face of Adversity

How COVID-19 Impacts the Mental Health in Wichita

The Chung Report is ending. But that doesn’t mean the fight for a more inclusive, informed and involved Wichita is over. When James Chung...

PART 8: EMBRACING CHANGE Entrepreneurs need to keep their head on a swivel in order to stay ahead of the curve. But how do you...

PART 7: FINDING YOUR NICHE How do you stand out to consumers who are constantly bombarded with marketing messages and multiple choices every day? According...