Wichita isn't immune to racism, and it's still impacting our city today. Watch this video to learn how it affects many in Wichita's African-American community.

EDITOR'S NOTE: We hope this piece explores Wichita's issues of inclusion in a way that spurs an open dialogue and urges readers to examine their own actions and notions. We know this only covers a fraction of Wichita's spectrum of diversity. It's not intended to be a comprehensive portrait of all communities, but an entry point into the conversation of inclusion. Ultimately, in order for Wichita to succeed, the people who live here — in all of its diverse neighborhoods and cultures — must have a voice. And we all must listen.


AN ALL-AMERICAN CITY, FOR BETTER AND WORSE

Wichita isn't immune to racism, either. It's a regretful part of our history, and it's still impacting our city today. It's a grotesque legacy we have to confront.

We can't brush it under the rug or pretend things are good — and we can't let the voices of those impacted by racism continue to be ignored or forgotten.

Watch this video to learn more about how racism has affected Wichitans from the past and the present:

Bonita Gooch, editor-in-chief of Wichita's Community Voice Newspaper, moved with her parents from Tennessee to Wichita in the early 1950s. Her father, an aspiring pilot, took a job in the aviation industry just to get closer to planes.

"He really wanted to just fly," she recalls. "But he took a job that was getting him close to planes because he wasn't given the opportunity to fly like he wanted to, as an African-American man, so working on airplanes was enough for him to move to Kansas."

There was a lot about growing up in Wichita that Gooch remembers fondly. Her father made good money, and she moved away after graduating high school to pursue journalism. It wasn't until she moved back 20 years later that she realized how segregation had impacted Wichita.

"I was absolutely shocked. I had no idea the tension and the level of segregation and discourse in Wichita," she says. "I think we just were happy kids in our neighborhood, and we were loving it. And so, we didn't pay that much attention to the rest of it, and a lot of times, my parents didn't ever make me aware of the extent of the things that were going on."

Gooch remembers her family traveling to a restaurant on the turnpike for dinner.

Our community is really still very much concerned about where we go and where we'll feel accepted.Bonita Gooch

"I thought it was great — we'd go on a trip," she says. "But the reason you did that was because it was one of the very few places that African-Americans could eat because of the intercontinental laws."

Gooch also remembers going to an all-African-American school, despite the 1954 decision in Brown v. Board of Education. She says it wasn't until the mid- to late-'60s that Wichita Public Schools began integrating. But, as she remembers it, the integration was one-sided.

"That's when we started being asked to volunteer to go to some different schools," Gooch says. "Our community forced everybody in the black neighborhood to be bussed to school instead of having people come into our neighborhoods."

Things have gotten better since the '50s and '60s, in part thanks to activists who made history in 1958 by staging one of the first organized lunch counter sit-ins of the civil rights movement at Wichita's Dockum Drug Store.

But the effects of segregation are still with us today. 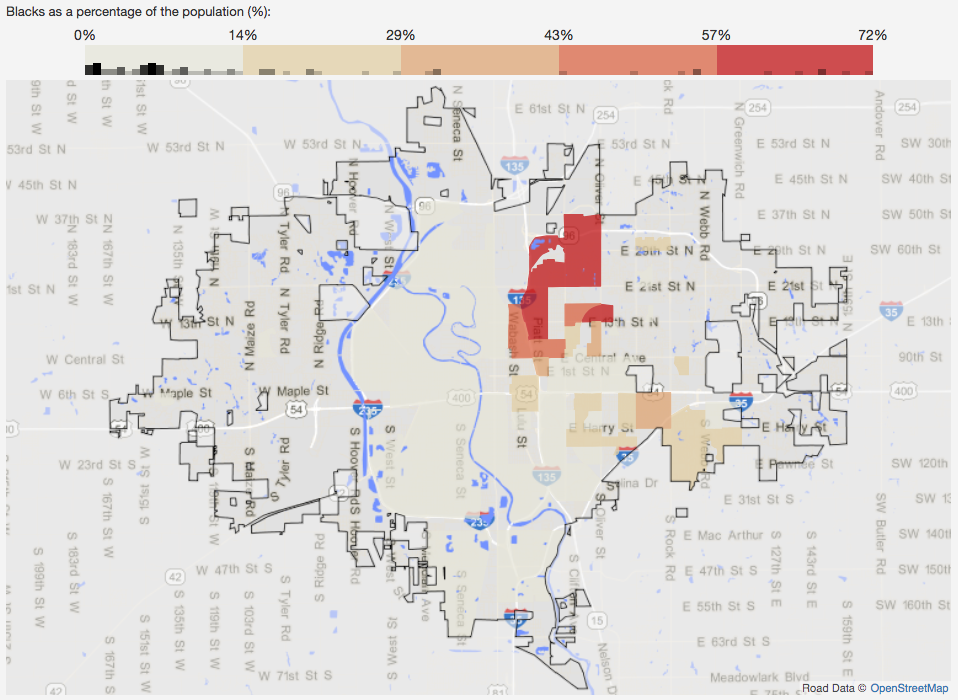 This map from Statistical Atlas shows the concentration of African-American Wichitans across the city. Despite official desegregation, Wichita is hardly integrated.

"Our community is really still very much concerned about where we go and where we'll feel accepted," Gooch says.

That isn't just geographically but also in terms of having influence in Wichita. Gooch says she's concerned with the trend of seeing only a handful of African-Americans approached over and over again as representatives of the community at large.

"I think there is an active engagement of the few we're comfortable with, and we see the same few over and over again pulled in and engaged," Gooch says. "They're great people, and I'm glad they're there, but we just need a broader reach."

Without this broader reach, we run the risk of driving people away, burning out the select few who are called upon and, ultimately, suffering from a lack of diversity in our city's vision and voice.

In the latest Focus Forward presentation, Reach Advisors analyst James Chung shared statistics about Wichita's net domestic migration, or the difference between the number of people moving to and from Wichita.

Between 2010 and 2017, Wichita lost a net of 18,452 people while cities like Des Moines and Oklahoma City gained 32,042 and 52,202, respectively. Of those losses, a disproportionate amount was educated women and minorities.

New census projections predict the U.S. will become majority-minority by 2045, which suggests that Wichita is losing the future. Bobby Berry, clinical educator and human performance lab manager at Wichita State University, has ideas on why that is.

"When you've grown up in a culture, in a city or a state that has been one way for a very long time, even though there are people that want the change, sometimes it's just hard," he says. "When you feel like you can't compete with people who don't look like you, it becomes very challenging."

Berry moved from Boston to Wichita at the age of 12. Despite his East Coast roots, he sees the Midwest as home. And despite the exodus of minorities, he's not ready to leave.

For me, growing up here and not really seeing a lot of individuals who reflect myself in some of the things that I aspire to be was motivating for me to be that change.Bobby Berry

"I don't want to leave a place where I don't feel like my work is done," he says. "For me, growing up here and not really seeing a lot of individuals who reflect myself in some of the things that I aspire to be was motivating for me to be that change."

But that doesn't mean Wichita doesn't have work to do. In fact, our demographic shifts suggest we have more work to do than most other cities. It does mean that if we can become an example of a city of opportunity for all, we could have an advantage in a country full of division and tension.

Wichita has squandered more than a few opportunities, starting with having a state university in the middle of a predominately African-American neighborhood.

"The perception of the community is that Wichita State is just basically an island in the middle of our neighborhood that just kind of exists but does little to reach out and function," Gooch says. "[It's] doing a much better job now of trying to reach out and engage, but that's been one of my pet peeves for 20-something years."

Other opportunities have been left on the table by getting limited representation on boards, surveys and panels. Berry says African-Americans are brought into important conversations too late to actually contribute to the foundations of those conversations.

He also notes that not all African-American Wichitans have the same point of view, but one person is often meant to represent the entire group.

"There's not just one African-American that needs to be at the table. There needs to be several," he says. "Someone that I know, that I respect very much, always says, 'If you don't have a seat at the table, sometimes you're on the menu.'"

Someone that I know, that I respect very much, always says, 'If you don't have a seat at the table, sometimes you're on the menu.'Bobby Berry

And Berry says there are a variety of voices often left without a seat.

"I think if we really want to see this city thrive, we're going to have to have a diverse city," he says. "Even for me being a black male, I don't feel like my lens and my opinion is the only one that needs to be at the table. There are a lot of things that I've never experienced, and I don't know what it's like to be a Hispanic female. I don't know what it's like to be a gay Asian-American. I don't know these things. So, the only way that I'm going to better myself, and, in turn, better my community, is by being able to be together and feel comfortable in doing that, and really hear what each other has to say."

We all come to the table with preconceived notions, biases and beliefs. Sometimes, these cloud our ability to actually hear the stories of others living outside of our experiences.

When was the last time you sat down with someone who doesn't look like you, talk like you or come from the same background as you? Start a conversation, and take the time to learn their story.