EDUCATION AND THE HUMAN CAPITAL CHALLENGE.

Human capital, or talent, is a term used to describe an economy's available workforce. It's not just the people living in the city, though. It's also their learned skills and abilities to work in a given field.

As a community, we are faced with an ultimatum. Either attract and grow our educated workforce by providing quality opportunities to gain education and use it, or allow that talent to move away to benefit other communities, leaving us with an overall smaller and less-educated workforce.

A steady increase of these skilled workers is one of the keys to Wichita's success in business and beyond. If we manage to keep educated talent in the city, they will work to move us forward. If we fail, we stagnate.

One way to measure progress is by using the educational attainment statistic, which tracks the highest levels of education attained by a specific population. These statistics can measure the population percentage with a doctorate, a master's degree, a bachelor's degree or a high school diploma, but most statistics focus on four-year degrees.

With Wichita State University, Newman University, Friends University and the Wichita Area Technical College, there's no doubt Wichita has a formidable higher education community capable of competing with nearly any other city its size.

Together, Wichita State University, Newman University and Friends University have more than 130,000 alumni on file. But for one reason or another, 45,000 of them eventually left the state of Kansas. Of the WSU students who have specific cities on record, only about 45.5 percent live in Wichita.

So just how educated are the people who live here today? 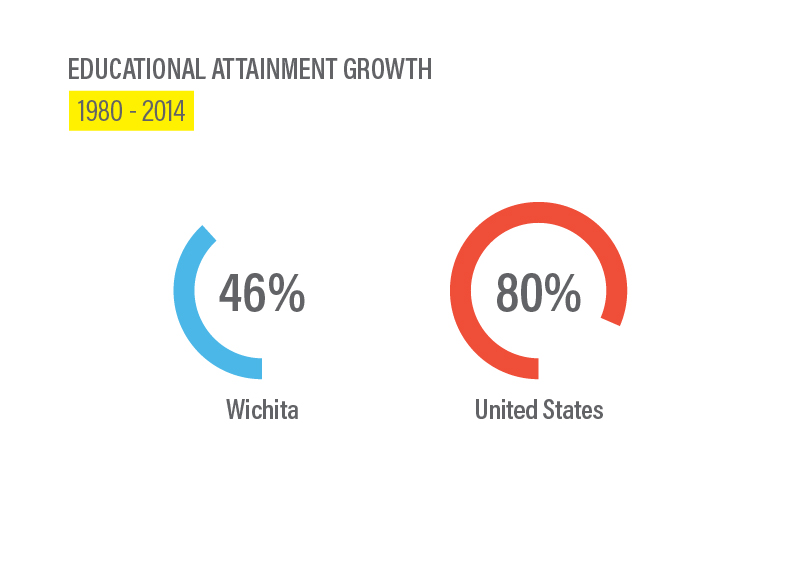 In his research, Reach Advisor data analyst James Chung noted a decline in Wichita's educational attainment compared with the national average. In the 1980s, Wichita's percentage of residents with at least a bachelor's degree was 15 percent greater than the rest of the country's.

Today, our percentage of college graduates sits at around 29 percent, trailing Cedar Rapids at 31 percent, Omaha at 34 percent and Des Moines at 36 percent. 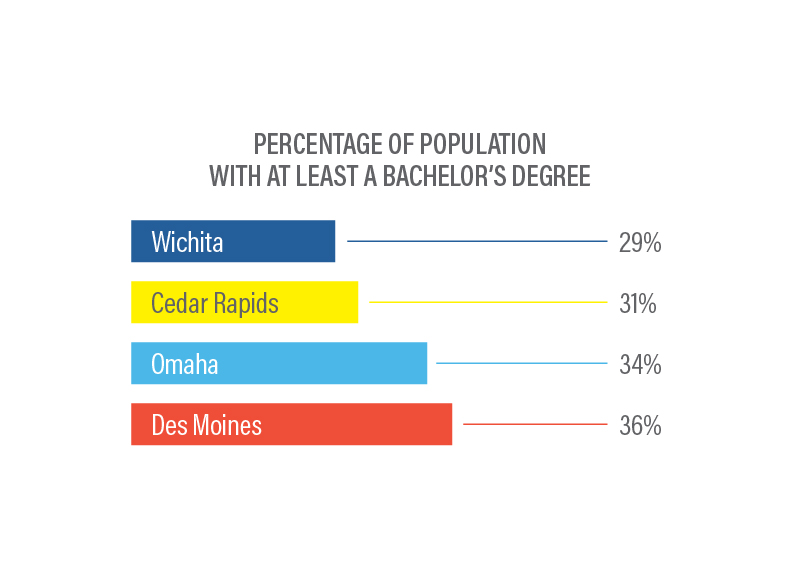 It's not that Wichita's percentage of residents with higher education has diminished. In fact, between 1980 and 2014, it had grown by 46 percent. But that growth is minuscule when compared to 80 percent increase experienced across the United States as a whole.

Our peer cities also outpace us, partially by attracting our graduates. Only 45.5 percent of Wichita State University graduates actually stayed in Wichita. Our investment in educating these people is largely leaving for other opportunities in Texas, Missouri, California or Colorado.

WHY IS WICHITA BEHIND?

With such an extensive higher education network, it leaves us wondering why Wichita is so far behind when it comes to its percentage of residents with at least a bachelor's degree. We are obviously educating plenty across the region, but the true challenge lies in keeping them once they've completed their education.

Despite the vast number of degrees handed out in Wichita, our number of workers with bachelor's degrees employed in the city remains stagnant. 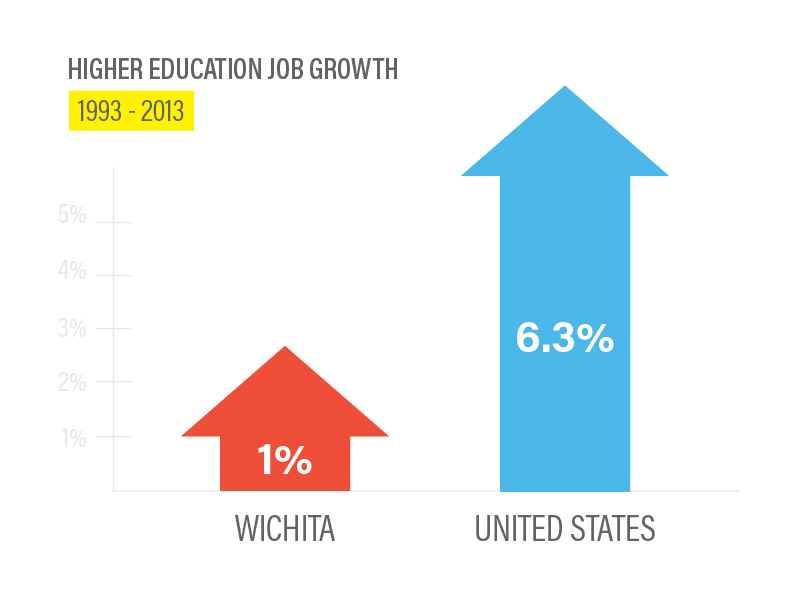 According to Chung's research, in 1993, Wichita businesses hired about 55,000 individuals with a bachelor's degree or higher. In 2013, this number had only bumped to 56,000. Over that same period, Wichita added 35,000 jobs, half of which required less than a high school diploma.

Wichita may also be suffering today because of its longstanding dependence on blue collar jobs.

In his research, Chung discovered what he calls the manufacturing paradox — the top 20 and bottom 20 manufacturing cities from 1990 and 2000 have a lower rate of college graduates today.

That's not to say manufacturing is a bad thing. Chung says today's strongest cities maintain a good mix of manufacturing jobs while still growing their non-manufacturing base at a high rate.

At the same time, we have to realize that Wichita's manufacturing jobs are tied to a volatile industry that fluctuates wildly with global trends. Too much dependence on these jobs could put Wichita in a constant swing between boom and bust. And when these jobs disappear, we have to get workers re-engaged in other productive ways, which often requires providing opportunities for further education.

Reversing this trend in educational attainment isn't easy. It takes continued support at all levels of education, a willingness to invest in quality of life and a strong economic backbone that can provide fresh opportunities for generations of future workers.

A lot of growth has occurred in Wichita's higher education network in the past year, with Newman University, Friends University, Wichita State University and the Wichita Area Technical College all expanding their offerings, scholarship opportunities or, in the case of Wichita State, their physical campus. WSU and WATC are also awaiting approval from the college accreditation association on a proposal that would make WATC a WSU-affiliated school.

But it takes more than just our higher education community to fix Wichita's disadvantage in educational attainment.

We have to diversify our economy to provide a wider array of opportunities for those who graduate from our schools and those who graduate in other communities. This would also lessen the impact of down cycles in manufacturing jobs, allowing these workers to be re-engaged in other fields when recessions hit.

The demands and values of our workforce are changing, as a generational shift plays out in Wichita's offices and factories. It will take a strong commitment to providing quality amenities that our younger workers demand. If we don't, other cities will, and our workers will leave.

Catching up in educational attainment is an important aspect of overcoming our human capital challenge as a whole. Other cities have recovered by continuing to provide training, recruiting educated workers from outside the city and building a new perception that frames them as a city built for the future talent base. Wichita needs to do the same.


CORRECTION: In an earlier version of this article, we incorrectly stated that 85,000 out of 130,000 recorded alumni left the state after graduating from four-year universities in Wichita. The correct number is 45,000, not 85,000.