We tend to blame many of our problems on elected officials. But in a representative democracy, that blame tends to circle back around to voters.

In his latest Focus Forward presentation, Reach Advisors analyst James Chung, preached the power of saying, "Yes." To city-wide change, to bold investments and to good ideas worth sharing and growing.

We tend to blame our "no" mentality on our public officials, business leaders and those we perceive to be in a position to do big things. But in a representative democracy, that blame tends to circle back around to us, the voters.

To think that elected officials, who serve at the will of the people, are going to be at the tip of the spear of change, I think is a fallacy.Ed O'Malley

That doesn't mean elected officials don't have an important role to play — they do. But the real change has to happen well before they're ever elected. It has to take place among us, the voters, in a way that creates a movement — a critical mass that forms a majority consensus. That's when we can bring in the politicians to shape our city, county, state or country to our vision of how things should be.

"When we complain about people in office not leading the change, it takes the pressure off us as citizens to build the movement in the public," O'Malley says. "It's cleaner and simpler if we can just believe that it's the fault of people in those elected roles. It's messier if we understand the reality, which is progress on our toughest issues can't actually be solved by these people alone."

There has been a lot of distrust seeded in the relationship between the American people and their elected officials. Research conducted by the Pew Research Center tracks a long history of distrust that seems to be creeping toward new lows. 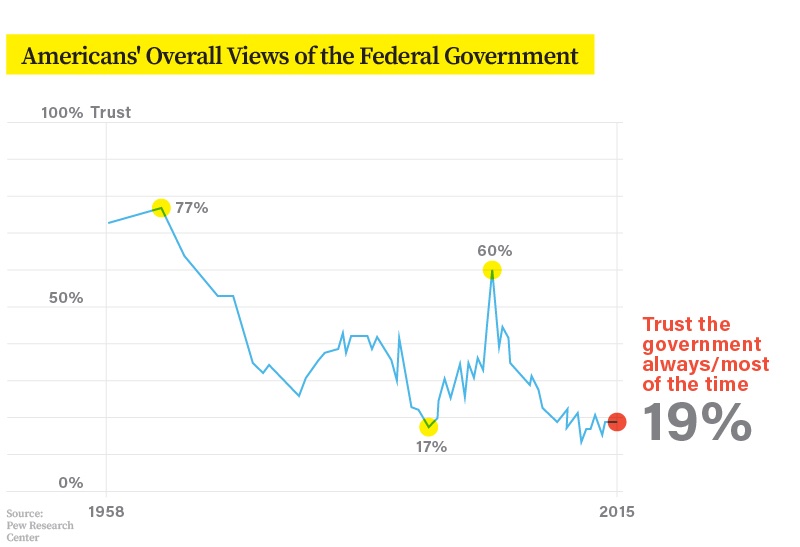 Much of this distrust likely stems from a misunderstanding of the basic relationship between the voters and the elected. If politicians can't actually be our agents of change, then of course we're frustrated and disenchanted when they promise over and over again that they can be. And if we can't trust even those we vote for, what hope do we have for ever trusting anyone in office?

Perhaps our expectations of elected officials and their role in creating change need adjusted. In some ways, we may be putting too much weight on their actions and ability to spark change. In other ways, we may be letting them get by without ever taking ownership of their position and leading their constituents forward.

Here are five criteria we developed to help you look critically at this year's candidates and adjust expectations for a healthier relationship with government officials going forward.

Download and print this scorecard so you can list your candidates and rank them on these criteria before voting.

There are countless motivations politicians have for running for office. Maybe they have a specific issue they want fixed in their community. Maybe they were recruited by their community or a political party. Maybe they're only interested in the power and notoriety involved in holding public office.

Obviously, if we perceive our politicians as only being in it for the power, we will tend to not trust them.

Discerning a politician's motives can be extremely difficult since most material put out by the politicians will be curated with the aim of putting themselves in a favorable light.

For local politicians, O'Malley recommends simply getting to know them and going with your gut feeling on whether or not their motivations are pure. And if you'd prefer not to meet politicians personally, do your research by reading their quotes, watching their TV interviews and talk with people who have met them personally.

"Candidates are pretty easy to track down, and the vast majority of them really want to meet you," he says. "Call them up and invite them to get a cup of coffee. If they don't want to get coffee with you, maybe that's a sign."

When politicians tell lies, dodge questions or sugarcoat hard truths, we tend to lose trust in them. But honesty can be tough to come by in a system full of unrealistic expectations.

During an election, officials are asked to make promises and commitments to things they probably can't accomplish. Yet, those types of commitments are demanded by the voters.

"Not many folks are going to vote for somebody who stands on the stump and says, 'Elect me, and I'll do my best to kind of bring people together to have conversations, and we'll try to make sure to stay focused on the things that matter, but I can't really do much by myself,' which is the reality," O'Malley says. "So we really need people to be much more thoughtful about what they're expecting, and candidates need to be a lot more thoughtful now about how they can seed trust and create appropriate expectations."

Any amount of change brings with it a certain amount of loss, O'Malley says. It's the job of the elected official to balance these changes with the loss they bring about.

An example could be seen in New York City, where elected officials moved to restrict the number of Über and Lyft cars on the streets to mitigate the loss for the city's taxi industry. While this may postpone the inevitable future of ride-sharing services, it also ensures the loss experienced by taxi drives isn't completely detrimental to their livelihoods.

"We need leaders to understand that change involves loss, and it's in mitigating that loss where their leadership skills have to come to bear," O'Malley says.

But Wichita is in need of some drastic change, which will likely come at a cost. Some of that cost could be mitigated by skilled leaders. But we also need public officials who have the stomach for necessary loss for the sake of forging a way forward.

If the person we're putting into office is completely ineffective, how could we ever trust them with the job — even if they're the most honest, altruistic person in the world?

But there are levels of competence needed for any local or national government body. Maybe you're electing a city council member who is looking to champion a specific law or issue. A deep knowledge in that specific law, and how it works within the city, would be paramount.

If you're electing a state representative or a governor, their knowledge needs to be far broader and has to include knowledge on the global and national trends affecting our state and cities.

Evaluating someone's knowledge has to go further than reading their résumé or skimming their website. It has to include thoughtful questioning and an honest evaluation of their answers to determine their level of competency.

Anyone can give a speech, O'Malley says, but true leadership is seen in a person's ability to mobilize people on difficult issues.

"There's a huge difference between leadership and authority," he says. "If they’re exercising leadership, then you would see progress in the things that matter most. ... If those things aren’t happening, people in elected roles shouldn’t say they’re leading."

Times will get tough, and roadblocks will come up. It's up to our elected officials to push through, re-evaluate and, within reason, live up to the expectations of those who elected them. If they don't, we have the opportunity to find someone who will.

In the same breath, tenacity is also something for which we should all strive. If we don't find the right candidate, we can't become jaded about the system as a whole. We have to try again and again to find the people we believe in who can mobilize the kind of change we want to see.

This list does very little good if we, the electorate, don't get out to vote, put these criteria to the test and hold our officials accountable to the change our city needs.

We get to choose who leads us, which is an amazing opportunity. It's time to find your candidates, share your passion and spread the information that leads to informed voting across Wichita.

Here are some ways you can get involved this election season, from registering to vote to finding that candidate you trust and believe.

Overall turnout in this year's August state primaries was only 23.2 percent of registered voters. The November 2017 local general election was only 8.3 percent. The August 2017 primaries for that election had a higher turnout of 8.4 percent.

If we want to see Wichita prosper, we have to get those numbers up and choose candidates who can lead us forward.