Born to an Italian family in Steubenville, Ohio, Noreen Carrocci has since traveled across the country, eventually landing in Wichita as President of Newman University.

Carrocci was the first in her family to go to college when she enrolled at Miami University in Miami, Ohio. She then went to the University of Kansas for graduate school in inter-personal communication. After leaving Kansas, she entered her career as a professor at St. Louis University.

Her career took her from St. Louis to Saint Paul, Minnesota and then to Mobile, Alabama as provost of Spring Hill College.

When she got the call from Newman University, Carrocci said she dreaded the idea of living in Kansas again.

“I actually turned them down,” she says. “Then about a month later, having some buyer’s remorse, they called me again and I came back for another visit and I fell in love.” 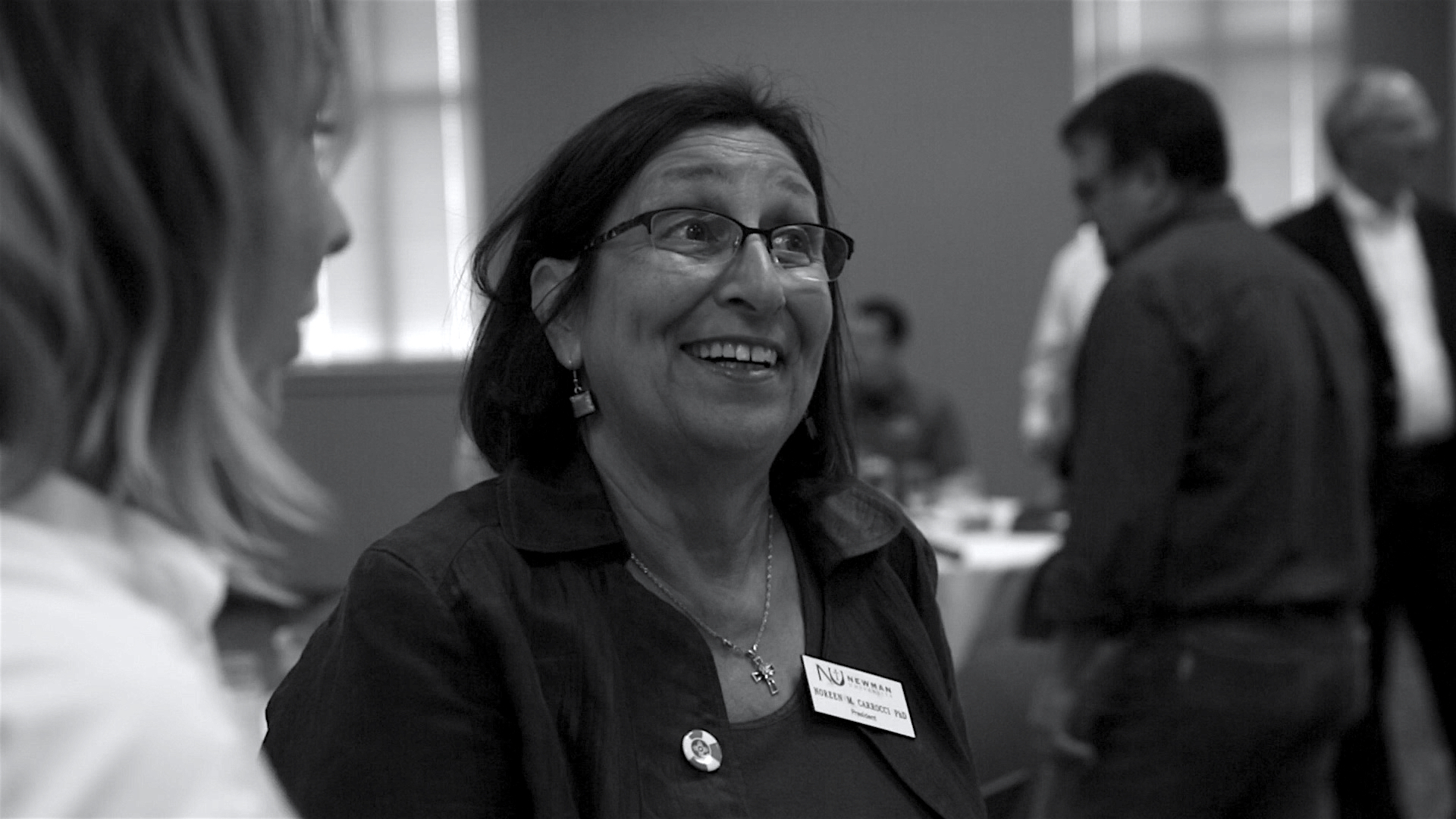 Noreen Carrocci meets with visitors at an event at Newman University.

While Carrocci’s career and journey to Wichita are worth sharing, what really made her a shining example for the city are her volunteer efforts, from being on the board for the Wichita Grand Opera — what she calls her “fun one” — to those more closely related to education.

Carrocci is involved in the Business and Education Alliance for the Greater Wichita Partnership, which focuses on “soft skills” like literacy for students who are still a ways from the world of higher education.

“As a university president, I think the challenge of human capital begins in early childhood,” she says. “If a kid can’t read at grade level by grade three, the chances of him or her graduating from high school are enormously reduced.”

Still, Carrocci is involved in several other groups more directly tied to higher education and young professionals. For instance, she is on the board at Via Christi Hospitals, which hires many Newman graduates.

All of us are trying to do what we can to meet workforce development needs for our region. ... We have a lot to offer and not all communities our size have the breadth and depth and scope of educational opportunities that we have here.

A partnership also arose with Kansas University’s medical school in Wichita, leading to greater opportunities for Newman medical students, which often go on to KU.

“We are a wonderful higher education community here,” Carrocci says. “All of us are trying to do what we can to meet workforce development needs for our region. … We have a lot to offer and not all communities our size have the breadth and depth and scope of educational opportunities that we have here.”

Carrocci admits that she initially got so involved to raise awareness for Newman. But as she grew more attached to Wichita, she says it became more about enhancing the community, even in opera.

Newman students are also asked to be involved in the community. Each year, they complete hundreds of thousands of hours in service across Wichita.

“That’s a big part of what all of this is about,” Carrocci says. “Helping all of us, including the least among us raise up and make this a better community.”

Any region would love to attract and build. But with limited resources, it's not a bad question to ask: Which is better for our future?...

These are people pushing toward a better Wichita. You may know some, others you won't. But these are who you should be paying attention to....

Learn how programs at WSU and WSU Tech can meet immediate industry needs, while also helping students meet future needs, whatever form they may take....