The History & Impact of McConnell

The History & Impact of McConnell

McConnell Air Force Base has a lot to do with Wichita becoming an air capital. How has this base contributed to Wichita's workforce and economy?

THE AIR CAPITAL OF THE WORLD.

This moniker goes back nearly 100 years, describing the birth of the aviation industry and national air defense.

At the heart of that was Wichita and McConnell Air Force Base. The base was named in 1951 after the McConnell brothers, Wichitans who were stationed here during World War II.

"There is no other base across the Air Force that has a richer history than McConnell Air Force Base," says Lt. Daniel de La Fé, chief of media operations for McConnell. "The 170 bases across the globe all have an extremely rich history. But McConnell is so unique with the mission that we operate here, the historical impact in the air capital of the world and just the community involvement with our base." 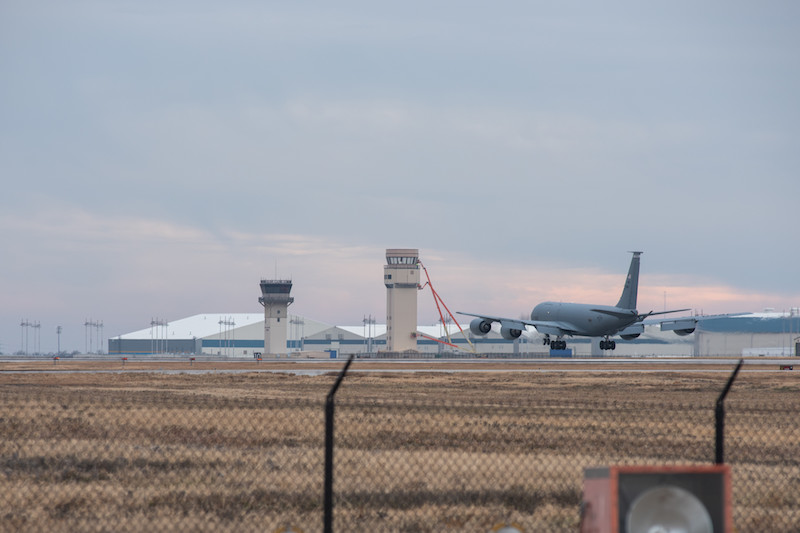 Many believe Wichita's time as air capital is fading, but others see it as a point of historical fact — that without the work done here in Wichita, aviation would look completely different.

There is no other base across the Air Force that has a richer history than McConnell Air Force Base.Lt. Daniel de La Fé

Even before McConnell was an Air Force base, it served a vital role in early aviation. In 1929, the Wichita Municipal Airport was built next to the Boeing Company. In the years leading up to World War II, Wichita was a hub of aviation production, constructing the planes that would ensure victory for the Allies.

In 1951, the Air Force purchased the property and converted it into its primary training facility for the B-47 bomber. Since then, McConnell airmen and women have been involved in every conflict from Cold War deterrence to post-9/11 operations, supporting various fighter units, missile facilities, and bomber units.

Today, the base remains a significant institution for the Wichita community, and the world, with the 22nd Air Refueling Wing, the 184th Intelligence Wing and the 931st Air Refueling Wing. That impact will only increase with the new KC-46A program ushering in a new generation in air refueling aircraft.

The service men and women who work, and sometimes live, at McConnell come from all over the country. Lt. de La Fé says it's extremely rare for someone to be stationed in their hometown.

Moving into a new community can be difficult, which makes welcoming these service men and women with open arms very important.

But he says all of that goes away when people actually get here.

"We have a saying that Colonel Phil Heseltine, the 931st ARW Commander likes to say, which is 'We come by assignment, and we stay by choice,'" de La Fé says. "Many of our active duty airmen come to the area expecting the average Midwest, and they absolutely fall in love with the community." 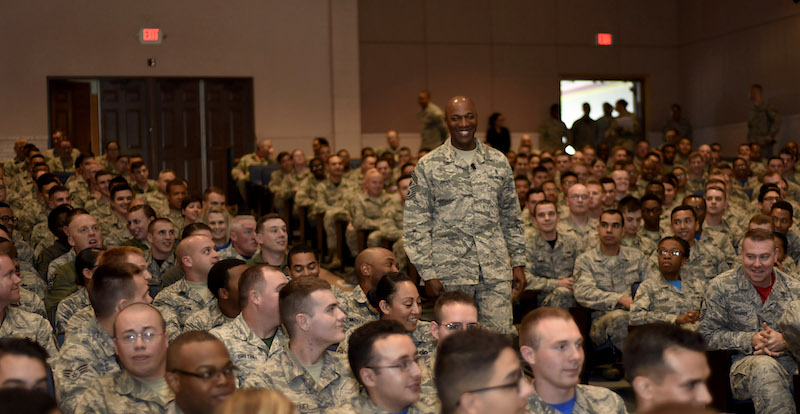 All in all, the numbers of McConnell's impact are pretty impressive. With a total of 17,169 personnel and $574 million in payroll alone, the estimated overall economic impact is more than $600 million per year, according to data provided by the U.S. Air Force.

Of the families and individuals stationed at McConnell, only about 1,100 actually reside on base. The rest find housing in the community, contributing to the housing market. Many also transition their work into the private sector, which is much easier in Wichita's established aviation sector.

"So there's a whole breadth of experience that just my own individual perspective gives, let alone people who've been traveling the globe for 20 to 30 years in service," de La Fé says. "So they're bringing jobs, they're bringing ideas, they're bringing relationships that you don't usually get to have when you just grow up and stay in the same neighborhood your whole life."

Many of the individuals on base also bring their families — wives and husbands who also contribute to the workforce wherever they're stationed. But finding work in a usually temporary assignment isn't always easy. Many become nurses or teachers — occupations that are fairly easy to transfer across communities. But even then, licensure rules between states can be difficult to navigate.

"For nurses and teachers, you need certifications to cross over," de La Fé says. "Normally, it's very difficult, but the state of Kansas has made it easier and is making it easier to get those people plugged in."

The Airman & Family Readiness Center helps families navigate these changes between states and cities, ensuring they can get plugged in and contribute to the community they call home — even if it's only temporary.

But not all of the economic impact comes from the people stationed at McConnell. In the past few years, more than $260 million has been spent on getting the base ready for the new KC-46A Pegasus. Construction labor and materials often come from nearby.

"The construction workers who are building our hangers, the resources, the concrete," de La Fé says. "Concrete can't travel 600 miles. It has to come from a local source."

Now that the KC-46A is getting off the ground, McConnell's impact — on both Wichita and the national air defense — is bound to evolve.

The KC-46A is a game-changer for military refueling, which has used the KC-135 platform since the 1950s. De La Fé says it's like going from a Model-T to a Ferrari.

"It's an advanced system," he says.

And so far, only McConnell has it. That means Wichita is now playing host to a huge range of personnel who may be using the new aircraft in the field. 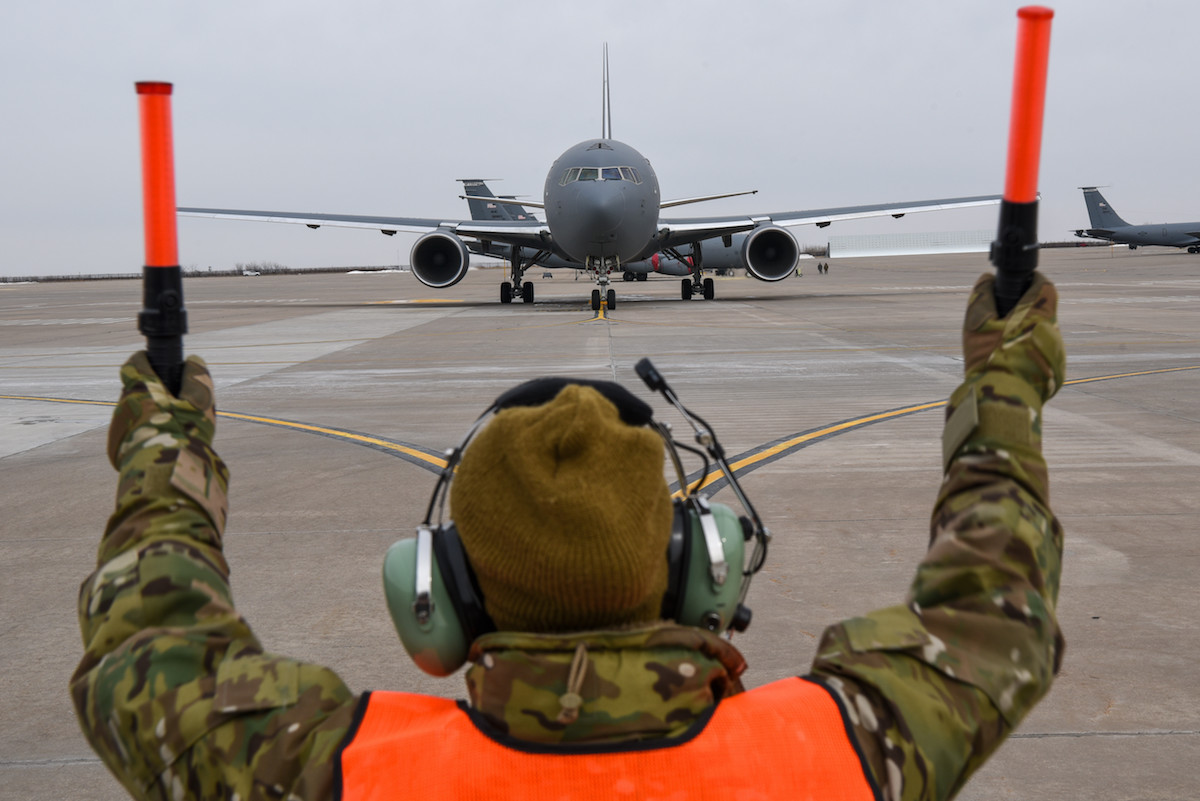 This increased diversity in the crews coming into McConnell isn't just good for the Air Force. It's also good for Wichita, which is bringing in a huge swath of people who may have never had contact with the city otherwise. De La Fé says between 75 and 125 people will be rotating into McConnell yearly.

The unique position of prestige this puts McConnell in can't be overstated. In fact, it's one of only two bases in the world up for the 2019 Commander in Chief Installation Excellence Award. The other is Ramstein Air Base in Ramstein-Miesenbach, Germany. More than 54,000 men and women are stationed at the Germany base.

"There are tens of thousands of people stationed there," de La Fé says. "We're just a tiny little David [compared with Ramstein Air Base], but we're executing a crazy mission because we have our total force partners and our community development."

With an already massive economic impact that will only become larger with the new KC-46A program, now is the perfect time to create stronger bonds between Wichita's military community and the community at large.

Since the beginning, it has been hard to draw a distinct line between the Air Force community and the general Wichita community, especially with how many civilians work in the aviation industry.

Friends of McConnell, a program through the Wichita Regional Chamber of Commerce, aims to consolidate support for military members while connecting Air Force leaders to civilian leaders to create a more cohesive community.

"Not only Wichita, but Derby, Haysville, Mulvane, Maize, and all of the surrounding communities are so amazingly supportive of the airmen," says Pat Gallagher, military liaison for the Wichita Regional Chamber of Commerce and director of Friends of McConnell. "They are an integral part of everything. They're living in our neighborhoods, they're going to our churches."

Military and community officials cut the ribbon on the new base housing in south Wichita. PHOTO CREDIT: McCONNELL AIR FORCE BASE

Not only Wichita but Derby, Haysville, Mulvane, Maize, and all of the surrounding communities are so amazingly supportive of the airmen. They are an integral part of everything. They're living in our neighborhoods, they're going to our churches.Pat Gallagher

Mission Wichita takes 10 young professionals from the Chamber's W group and pairs them with 10 service members at McConnell. For several weeks, they spend mornings on base learning about what the military does here in Wichita, and afternoons in Wichita, learning more about the community these service men and women are now a part of.

"You just don't know what goes on on a military base until you actually walk in the footsteps of the airmen," Gallagher says. "In the afternoon, it's on the civilian-side. ... They'll touch on the arts and culture piece, the education piece, the government piece on the civilian-side, and see housing and every other facet of civilian life. Once you have 10 to 20 young people who have done this, the word spreads."

Still, he says there's always more to do. Talking with a neighbor in uniform is a good place to start.

With investment in the new KC-46A program, it's likely that McConnell will be in Wichita for decades to come. Wichita has much to gain if it continues to invest in the relationships that create a widespread impact and retain the city's position as an Air Capital of the World.

"I always felt that this is a spectacular community, and our military leaders need to see that. They need to see the people and interact with the people," Gallagher says. "I think everybody across the board benefits."