Where are all the new jobs?

Where are all the new jobs?

When Wichita companies announce growth, it's usually great news. So where are these new jobs coming from, and are they the jobs we need today?

When companies are growing, they're eager to talk about it. Newspaper headlines often boast of forecasted growth and new capital investments — always good news for Wichita. But do all those predictions come true?

Wichita also has a low unemployment rate, which has seen steep decline in the past five years and now sets at 3.9 percent, below the national average of 4.1 percent. So even if companies are dead set on hiring, do we have the available workforce? 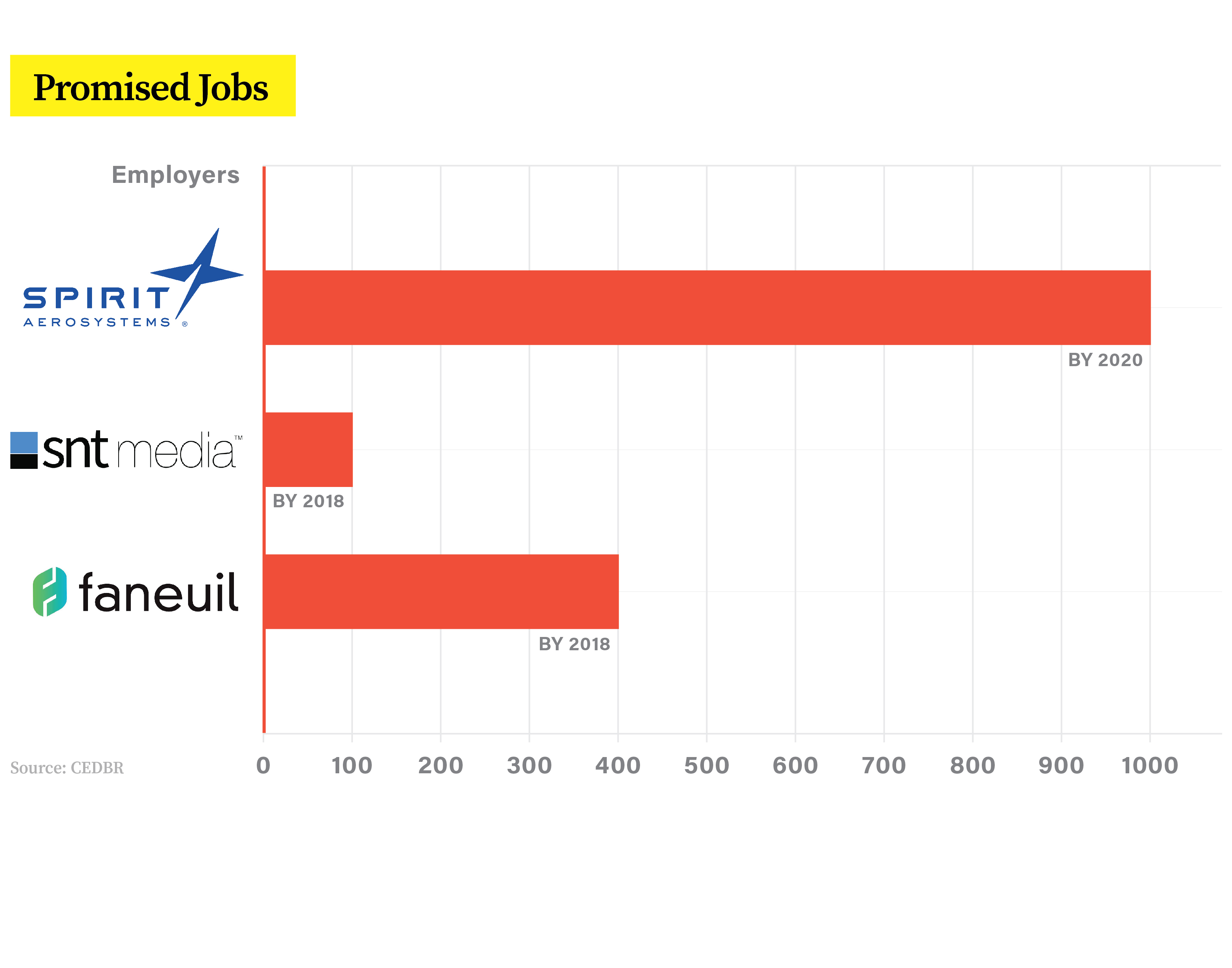 Late last year, Spirit AeroSystems announced it would hire around 1,000 workers over the next few years, which will require heavy recruiting, even outside the state.

In 2016, SNT Media announced it would double its Wichita workforce, adding 100 high-paying tech jobs. Less than two years later, the company laid off its entire workforce and closed its doors, leaving its promise unfulfilled.

When companies announce growth, it's great news, and even vague promises of future growth can boost the confidence of a recovering economy. But we should always approach job predictions with cautious optimism.

That being said, economically speaking, not all jobs are created equal. So what should we be looking to grow?

In his original 2015 presentation, James Chung evaluated the types of jobs Wichita needs to cultivate a more stable economy. He said decades of investing in manufacturing is no longer paying off in terms of jobs as efficiencies increase and businesses can do more with fewer people.

Instead, he recommended diversifying into less volatile sectors like health care and technology.

Jeremy Hill, director of WSU's Center for Economic Development and Business Research (CEDBR), disagrees with Chung's conclusion that manufacturing investment has hurt Wichita's labor market. He says manufacturing's ability to do more with fewer people is actually quite valuable to the industry, but can still be difficult on a community dealing with a tight labor market.

Jobs seem to be growing steadily in aviation with Spirit announcing strong growth. Its contractors will surely benefit as well. But where are jobs in health care and tech?

Let's take a look at the predictions for Wichita's employment that were published in October 2017 by the CEDBR. As with all predictions, take these with a grain of salt.

Hill says an employment forecast update is scheduled to be released in late May.

Overall, Wichita is slated to have steady employment growth in 2018. The yellow area you see in the chart below represents the variance in the prediction, so we could see as much as a 1.3 percent growth or as little as 0 percent. 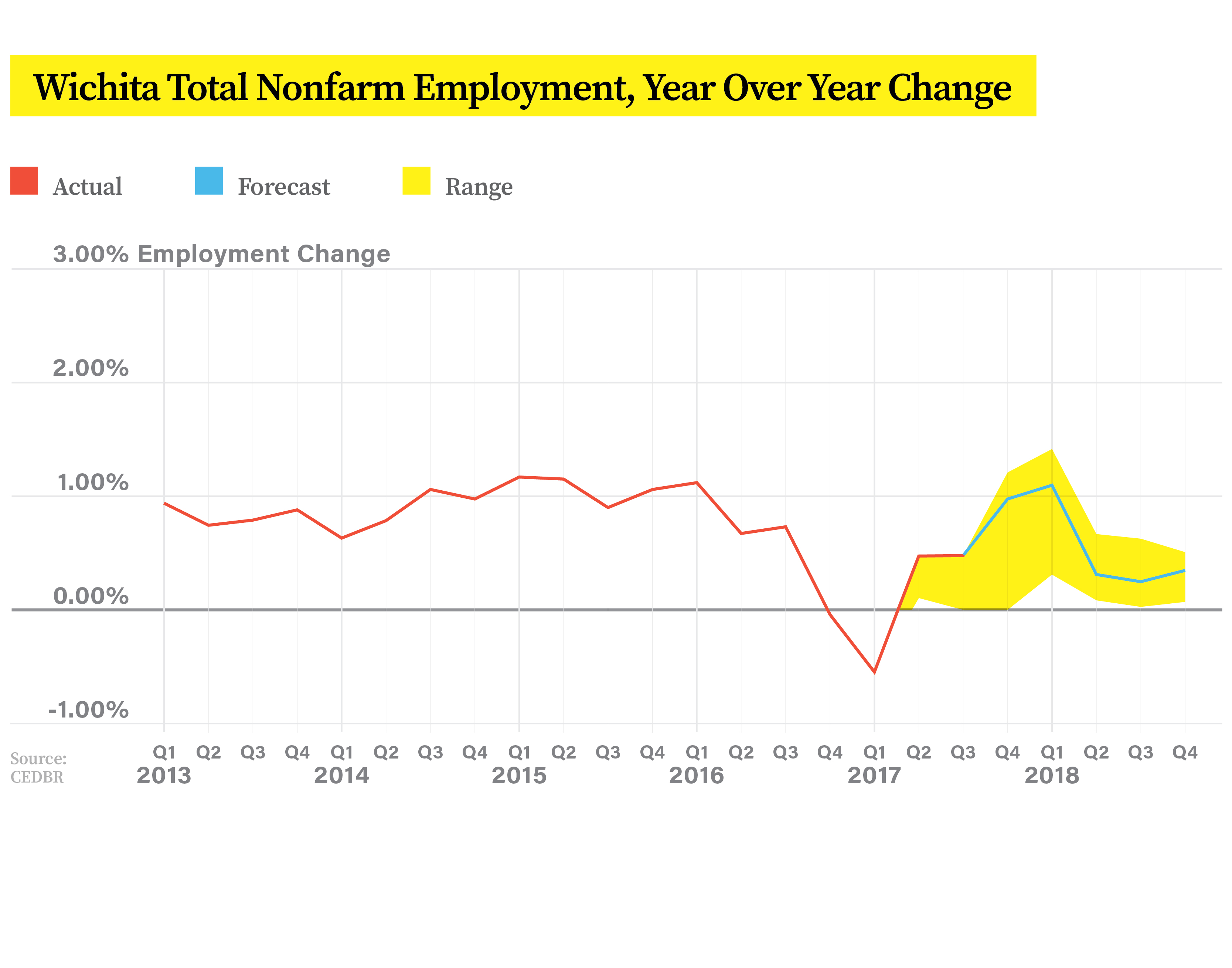 Let's break this down further, starting with the production sector, which includes construction and manufacturing of durable and non-durable products.

Overall, the sector is slated to see a bump of about 0.6 percent with around 500 jobs added in construction and about 100 jobs lost in manufacturing for a net gain of about 438 jobs.

"It is possible that the larger companies are doing better financially while the smaller suppliers are losing jobs," he says in an email. 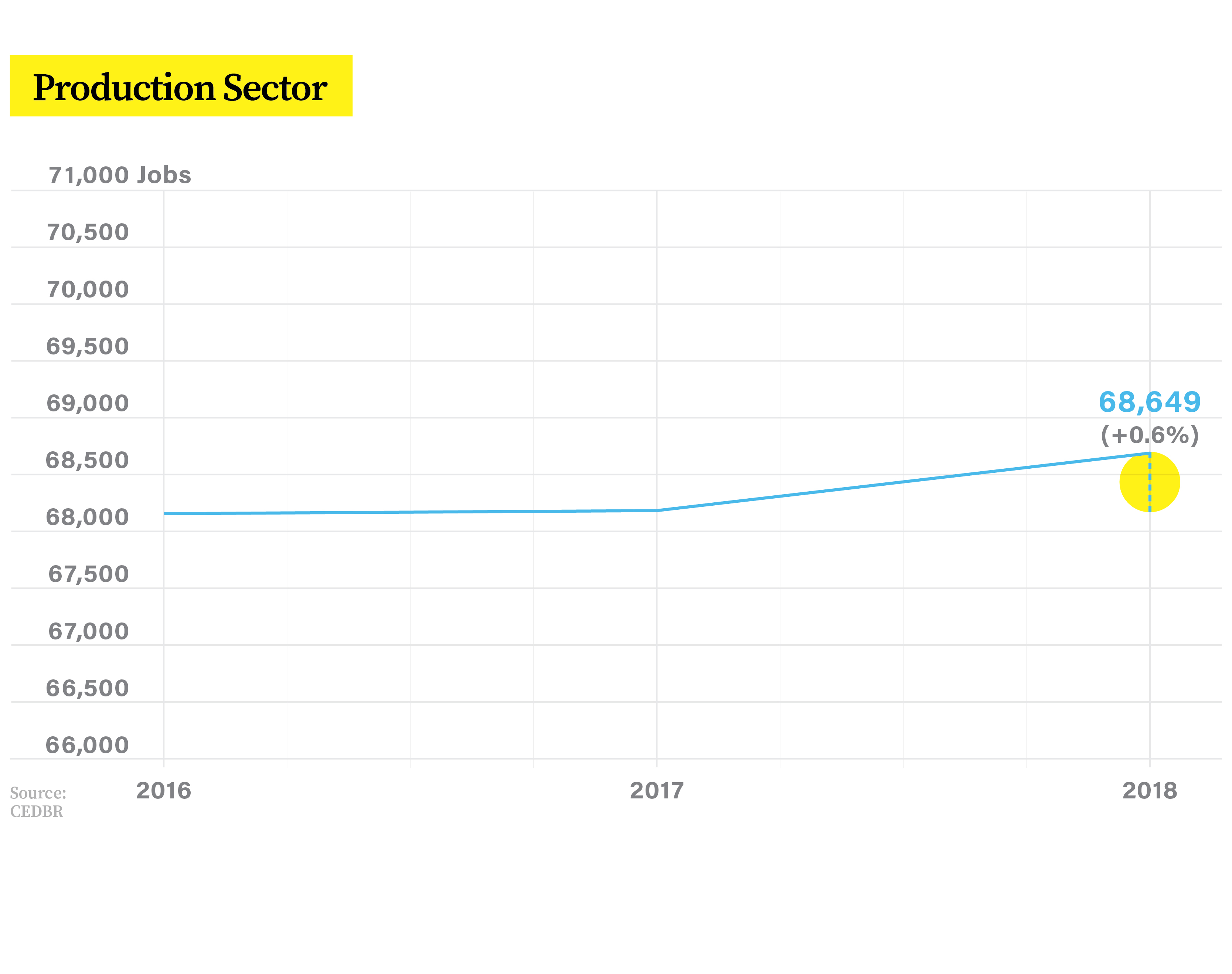 In the trade, transportation and utilities sector, Wichita is slated to lose just a few jobs after a larger decline in 2017. Most of the loss is expected to happen in retail trade as online shopping continues to take hold with consumers.

Transportation and utilities are expected to grow about 200 jobs, meaning the sector overall could lose around 127 jobs.

The service sector — particularly education, health, hospitality and business services — is expected to see the strongest growth this year at about 1,143 jobs added. However, financial and technology services are expected to contract. 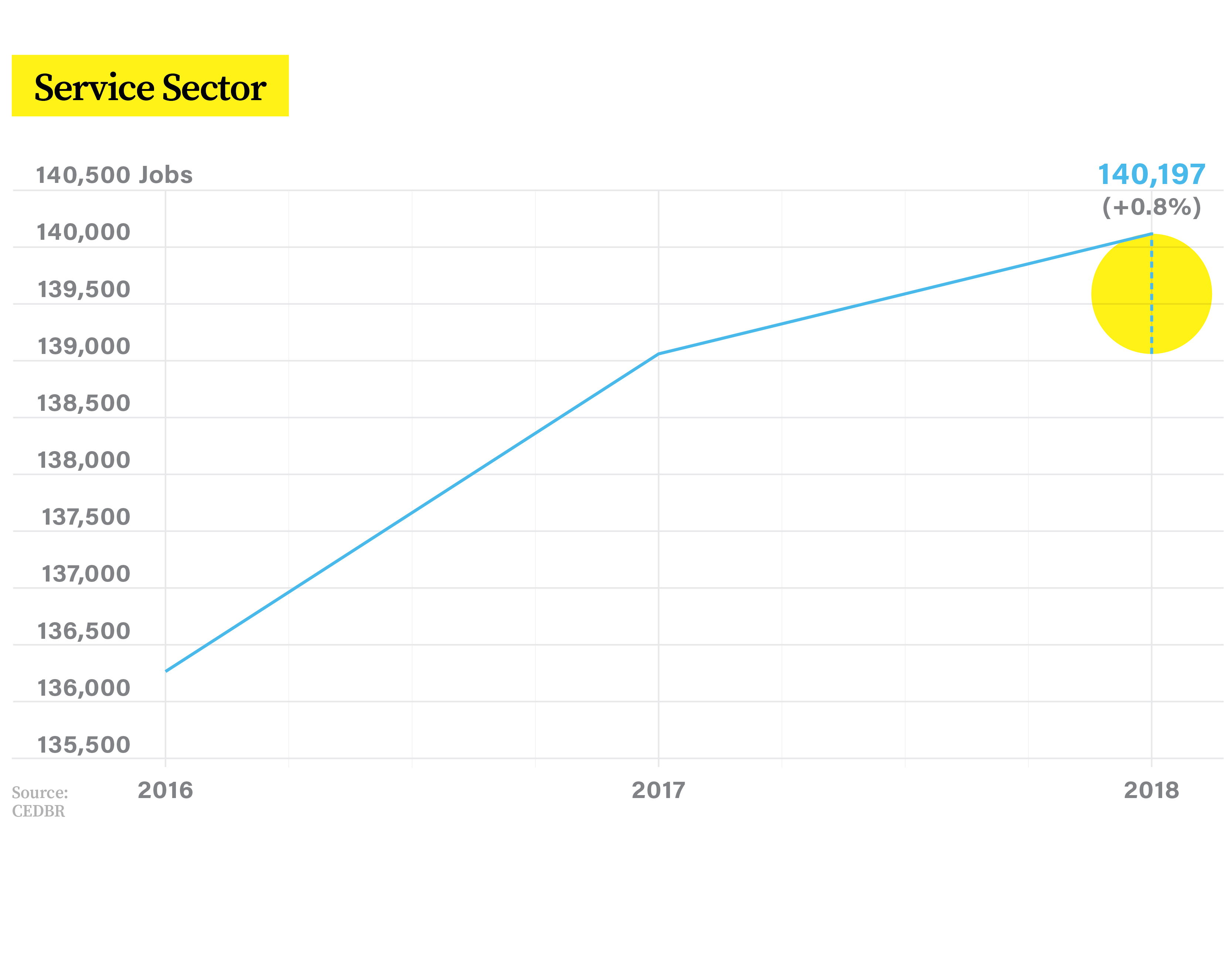 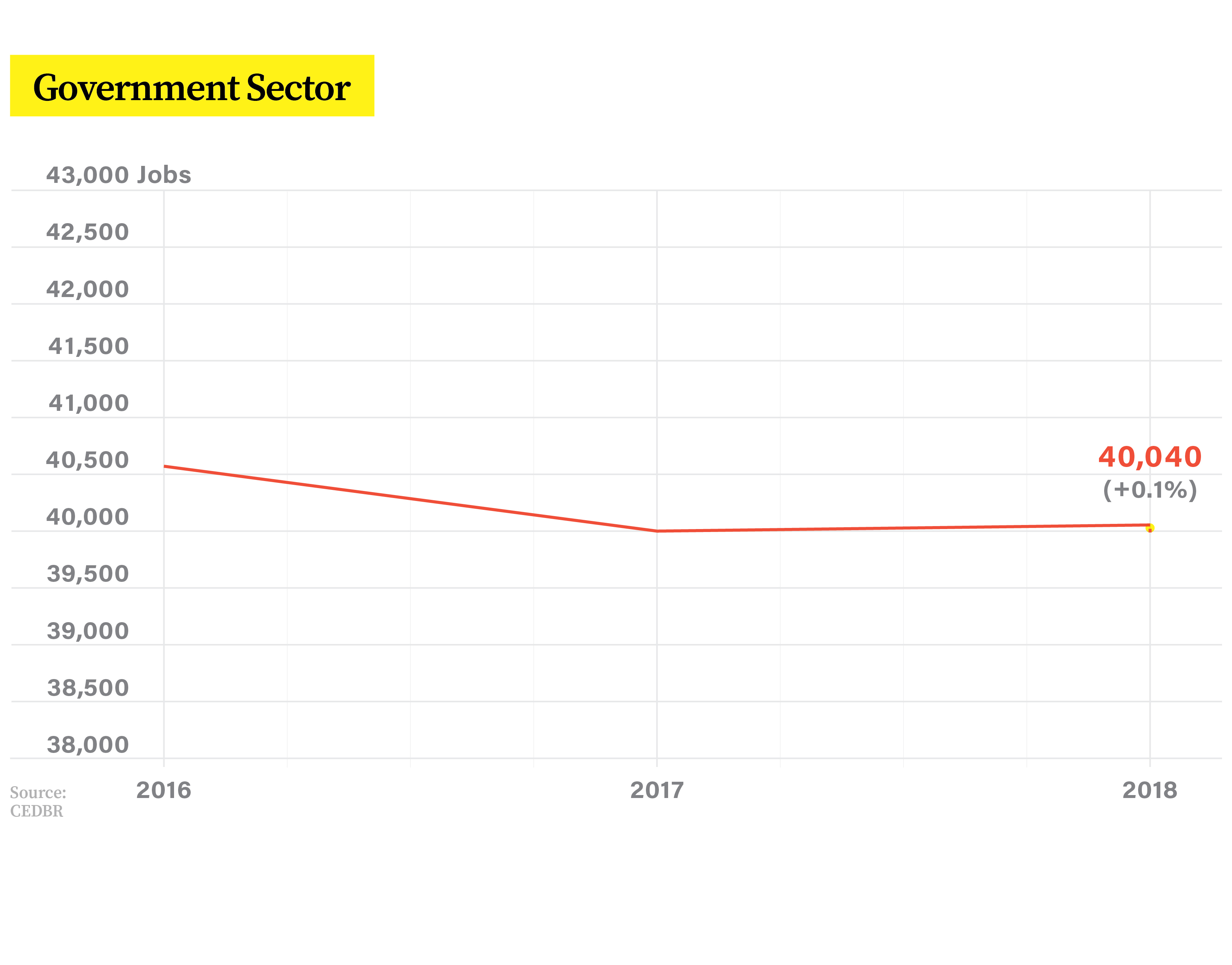 It's tough to say. It could be argued that any job growth is a sign of life for a recovering economy, but it's a very small sign of life.

Technology jobs are projected to decrease, which means we could be losing traction on getting the jobs we need to increase economic diversity.

When the CEDBR's report was first released, the Wichita Eagle reported that Wichita's employment forecast was the smallest increase of the top three Kansas metros. Kansas City was expected to grow by about 1.6 percent and Topeka was expected to grow by around 0.8 percent. But this is nothing new, Hill told the paper, as the 2018 report closely matched 2017 and 2016.

"For Wichita, it’s the kind of growth rate we’ve been at for a while," he says.

One area where the CEDBR was not optimistic was aerospace manufacturing. While commercial aviation experiences an increase in demand and production levels, general aviation remains stagnant.

There's only so much labor in the market to hire. ... Unfortunately, our outlook for manufacturing is not positiveJeremy Hill

Spirit's announcement of 1,000 new jobs came about two months after the report came out. But the CEDBR updated in January with little changes to its predictions.

In October, Hill told the Eagle that aviation could start a hiring spree.

"But it’s such a long lead time, and there’s only so much labor in the market to hire anyway," he says. "Unfortunately, our outlook for manufacturing is not positive."

Spirit AeroSystems tweeted on April 13 that U.S. manufacturing companies are indeed struggling to find qualified workers. Fulfilling the promise of 1,000 jobs may be difficult.

Like other manufacturing companies in the U.S., Spirit is challenged to find qualified workers for its production lines. Justin Welner, Spirit's VP of HR testified before the House Ways and Means Committee about the #JobsGap in the manufacturing sector. https://t.co/i5qm7NpWTs

Job growth — especially in the right jobs — is a vital part of the business cycle challenge and the human capital challenge. It brings people to Wichita with a promise of opportunity and prosperity. When we experience stagnation — even if it's slight — it can signal to some from outside our city that now is not the time to come to Wichita.

Hill says wages are actually a better signal for attracting labor in a tight labor market than job openings. But he says Wichita hasn't adapted by raising wages.

"Unfortunately, wage growth has not kept up with the nation," he says in an email. "Although we are not in a tight labor market, wages are not reflecting the need for labor compared to other markets."

Learning that our economy isn't growing at the pace we hoped can be a tough truth to take in and talk about. But it's important we keep discussing.