Where are they going now?

Where are they going now?

We used graduate and alumni data from Wichita's major universities to revisit one of Wichita's most prevalent challenges: the mass export of talented college graduates.

We all know that Wichita is leaking talent. Most of us probably know someone who has either recently left or is talking about leaving. We congratulate them on their move to Austin, Kansas City or Seattle, but we're ultimately left feeling unsettled. It troubles us, and it should.

In his 2015 presentation, Reach Advisors data analyst James Chung identified talent as one of Wichita's top exports. In his follow-up report in June, he confirmed it's still a problem.

In 2016, The Chung Report published an infographic using data from Wichita's major universities and the Wichita Area Technical College — now WSU Tech — to paint a picture of where our graduates were going.

This year, we set out to revisit the topic with updated data from Wichita State University, Newman University and Friends University. But, while these institutions generously provided a large amount of information on their alumni, comparisons to past years proved difficult.

Each university records alumni data differently. And, since our first analysis, several of them modified the way they record the data. As a result, we could not break down numbers in the same way to get accurate comparisons.

The underlying data is also largely self-reported. For example, Wichita State sends out a survey each year to alumni they have on file, who are then able to update their information and/or opt in to the Alumni Association. There are an unknown number of students who either never opt in or never update their address, which can affect the accuracy of any analysis.

Since reviewing the initial data in 2016, more than 70,000 new students were added across all of the schools — mostly from Wichita State. While that provides more data points, and feasibly contributes to a more representative view, it also creates a situation akin to comparing apples to oranges. However, there ended up being valuable analysis drawn from the data, which itself isn’t quite apples to apples.

It's like comparing apples to pineapples. It still has "apple" in there, but it's much larger and quite a bit pricklier.

Throughout this article, we're going to be comparing alumni numbers collected in 2017 as directly as we can to numbers from 2016. Because of the large number gap, most of these will be using percentages of the whole. For instance, while Kansas certainly gained a lot of alumni in the new report, its percentage share of the whole actually went down slightly.

We'll start by comparing states. In 2016, 15 states, including Kansas, attracted 90 percent of Wichita's reported alumni. Those included Texas with 5.5 percent, Missouri with 3 percent, California with 2.9 percent and Colorado and Oklahoma with 2.8 percent. 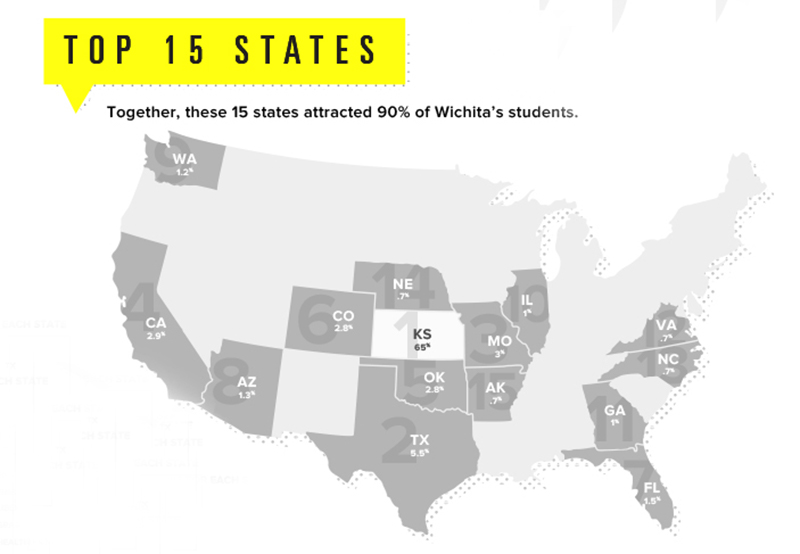 This year, we looked at the states with the biggest percentage swings — both up and down. 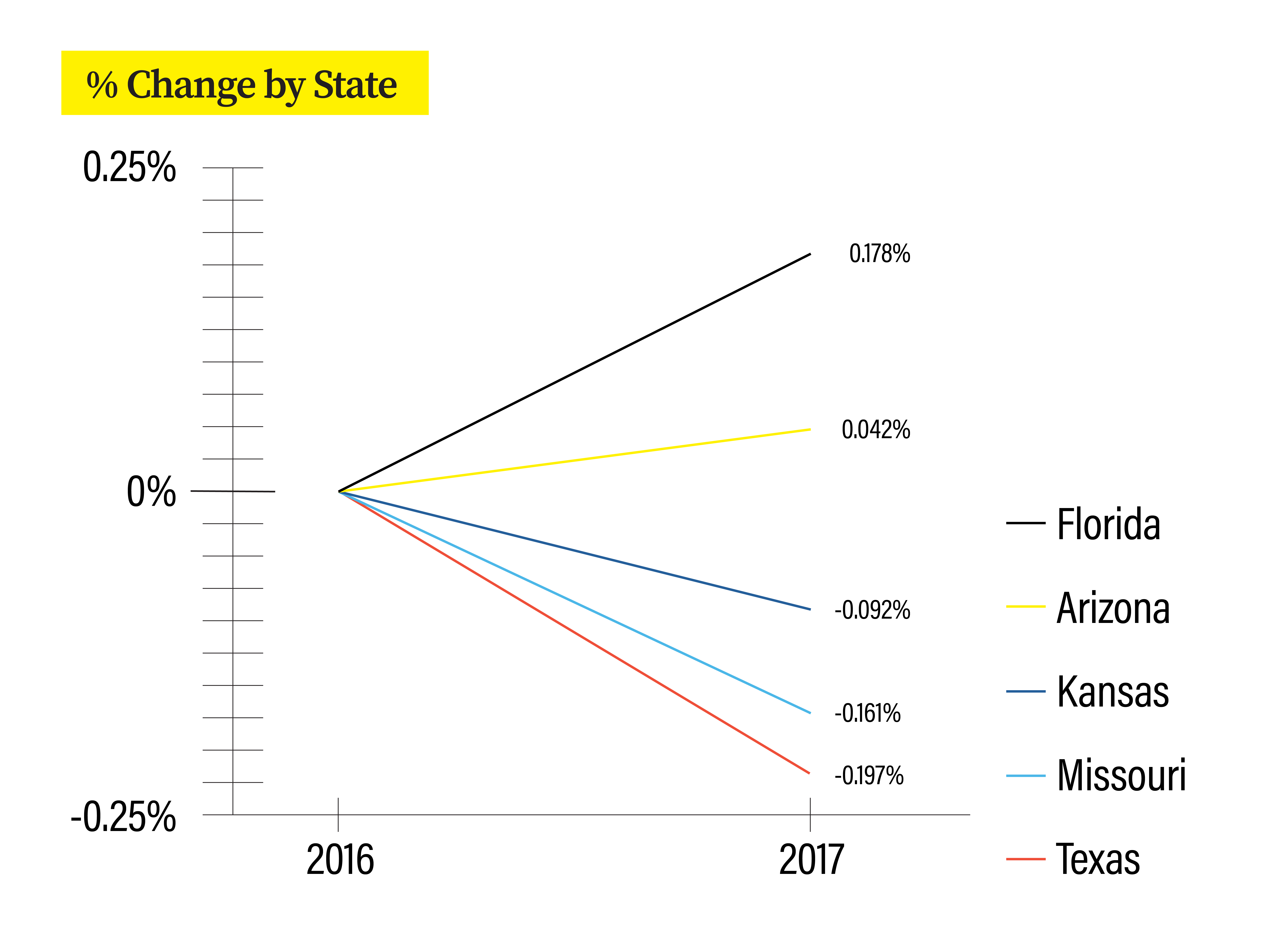 Florida grew the most with a 0.178 percent swing from 2016. Texas lost the largest share with a 0.197 percent drop. Kansas still attracted about 64 percent of all Wichita graduates, but lost a little bit of its share to other states.

When we shift to raw gains, Texas actually gained the most students. But other states gained enough students that Texas still lost its share of the whole. 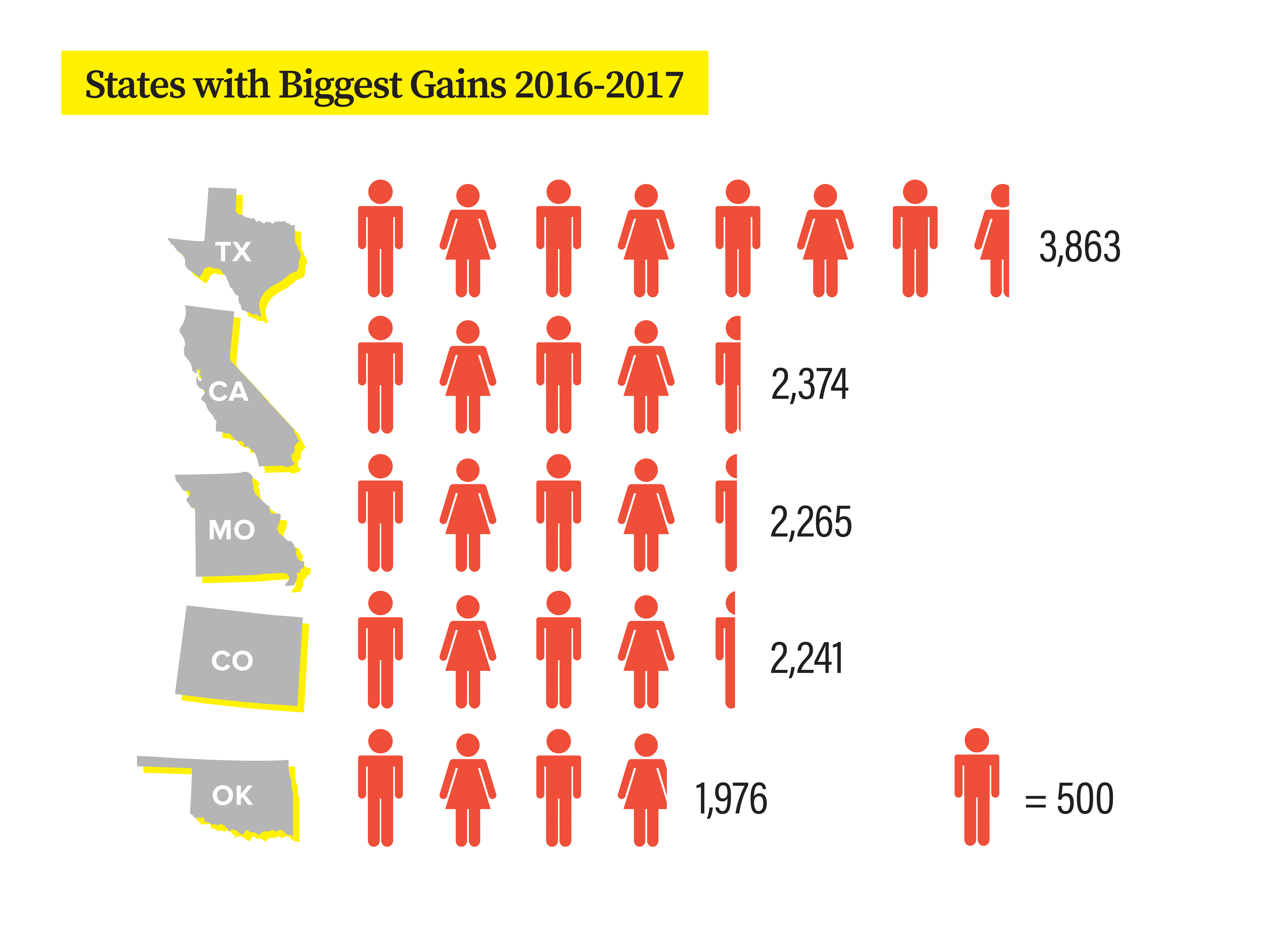 It's hard to say whether we can draw any strong conclusions as to our relative progress on retaining talent, but it does make one thing clear: Kansas lost share.

People aren't just leaving Wichita; they're leaving the state. And some of the states with the largest gains — Florida, Arizona and California — indicate that students are moving farther away, toward the coasts. Competing against Oklahoma and Missouri is different than competing against California or Florida. It makes it even more critical for our community to focus in on workforce retention.

In his latest presentation, Chung also pointed out that Wichita is gaining only a marginal share of graduates from Kansas State University and Kansas University. Only 7.6 percent of K-State grads move to Wichita, and only 3.6 percent come from KU.

"This is a vote on what people think about their potential in Wichita," Chung says. "We need to start thinking a lot more aggressively about how we end up growing talent, fostering talent and harnessing talent in Wichita."

This data matters because it shows us the extent of our problems. If we can't visualize our share of Kansas college graduates, we can't see how much of a problem it really is.

This data also highlights the importance of area institutions gathering accurate information on as many former students as possible.

There is likely no one perfect method to capture where our graduates are going — and in what numbers — that would broadly apply across institutions. However, any effort to step in that direction — to create a more standardized way to measure the movements of graduates in a comparable manner — would contribute to moving our community forward.

James Chung cites Emsi, a data analysis firm that specializes in labor market data, in some of his findings. Not all of us have immediate access to professional data services, but if our institutions can utilize tools like Emsi and share their findings with the community they support, perhaps we could better understand and counteract the issues facing our college graduates and the Wichita businesses that desperately need them.

Perhaps the time has come for a more collaborative data collection process that could benefit all the members of Wichita's higher education ecosystem and provide vital insight into our investments in students.

How do you think university graduate data should be collected and used? And how could Wichita's higher education ecosystem work together to provide the best information possible on the city and state's investment in our students?

Have an idea on graduate data collection? Let us know on social media or our contact page.