HOW ARE WICHITANS EDUCATED?

It may be strange to think of education as an ecosystem, but that's exactly what it is. K-12 education provides a strong backbone for learning, but parents, organizations and non-profits help to ensure that students are progressing — even when they're not in the classroom.

This ecosystem is extremely important to creating not only a productive society able to meet the demands of a growing economy, but also a thoughtful society able to teach, solve problems, serve others and participate in a democracy by voting or running for public office.

Education is the fuel for our future, and we have to get it right. We spoke with local experts to find out more about Wichita's educational ecosystem.

Across the state, nearly 90 percent of school-aged children are enrolled in public schools. The other 10 percent may be homeschooled or enrolled in private schools.

Despite a range of options for education, everyone should support Wichita schools because of the immense effect it has on the Wichita area and the state as a whole, says Wendy Johnson, division director of strategic communication for the Wichita School District.

Wichita public schools educate about half of the students in Sedgwick County and 11 percent of the public-school students in the state.

"That's a huge impact, and that's why it matters that we get it right," Johnson says. "Your kids and my kids will be the next generation of us."

So who really should take responsibility for the education of our children?

"This list could go on and on and on," Johnson says. "It really is all of us."

That's where the ecosystem comes in. Businesses, non-profits, parent groups and faith communities have all taken a piece of the puzzle that makes up learning.

In 2015, the United Way of the Plains began Read to Succeed, a program focused on tackling poverty at its source: education.

"If we're ever going to break the welfare cycle, education is the answer," says Patrick Hanrahan, president and CEO of United Way of the Plains.

If we're ever going to break the welfare cycle, education is the answer.Patrick Hanrahan

Hanrahan says the program is based on the finding that if students are not reading at level by third grade, they are four times more likely to drop out of high school. To help with literacy, the program has adult volunteers visit schools in USD 259 to have students read to them. This gives the student more time reading with an adult who can encourage them and help with pronunciation.

"If we can help a child learn to read, they stay in school, they don't drop out, they graduate, they get a job, and they're going to lead a much happier and more productive life and may not be on the welfare roll."

The program is working, Hanrahan says. Children who go through the program improve their reading fluency 17 percent faster than average third graders, growing their average word per minute by 1.5 words.

In 2015, the program started in a single school with 22 volunteers. In January 2018, it's now in 20 schools with more than 300 volunteers, many of which come from businesses, Hanrahan says.

"I think they're also realizing we have to keep the pipeline filled," he says. "Today's third grader is a job candidate for 10, 15 or 20 years from now."

With programs like Read to Succeed, and far more not mentioned here, how does Wichita's educational ecosystem stack up against those in other cities and states?


HOW DO WE STACK UP?

In its 2018 list of best Kansas school districts, Niche.com gives USD 259 a B- based on a combination of statistics and parent reviews.

Mark Tallman, associate executive director for the Kansas Association of School Boards (KASB), says statistics are great, but they aren't necessarily the best way to pick a school district. Instead, parents should pick schools based on the specific needs of their children.

"So often, the perception of the quality of a school district is a reflection of the students who are already there," he says. "There is a strong correlation between student achievement, test scores, graduation rates and income levels. So if you’re a school district that has more students in poverty, your numbers are not going to look as good. That doesn’t mean you’re not as good a school system. That doesn’t mean you’re not doing well with those kids. In fact, the kids might learn more, and there might be more progress made, but the perception is, ‘District X isn’t very good because their test scores aren’t very good.’ Usually what that means is District X has more kids with greater needs." 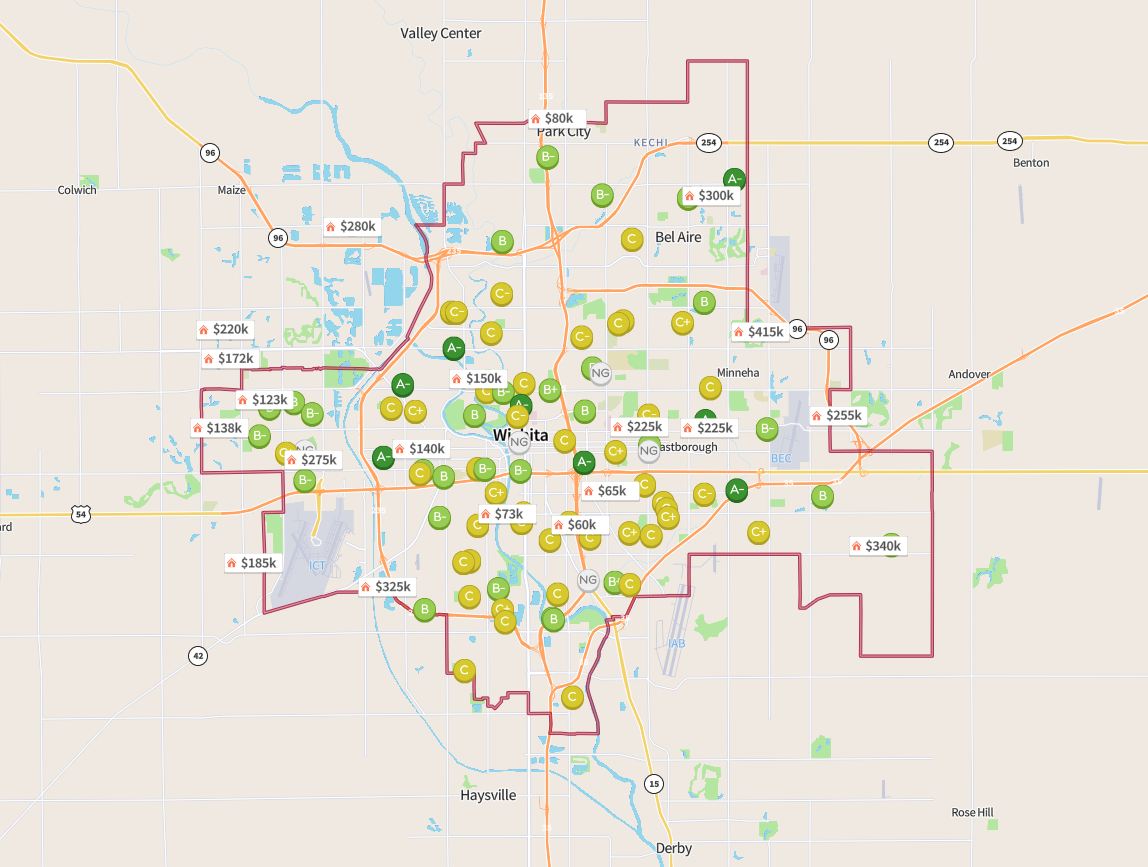 This map from Niche.com and Realtor.com shows the relationship between home prices and school ratings, as schools perceived as better create a demand for homes in the area, and wealthier families in an area create a better perception for the schools.


In his role with the KASB, Tallman conducts research and lobbies for education at the state level.

Currently, Kansas education ranks 10th in the country, based on a collection of statistics and measures reported by the KASB, including test scores and the number of students per teacher. Tallman says these same measures have been used since 2011. Being in the top 10 is great, but Tallman believes that won't be the case for much longer.

In virtually all of those measures, we've been slipping compared to the rest of the country. We have done well ... but the national average has improved more than Kansas, and our ranking has actually slipped over the past several years.Mark Tallman

"In virtually all of those measures, we've been slipping compared to the rest of the country," he says. "We have done well ... but the national average has improved more than Kansas, and our ranking has actually slipped over the past several years."

Kansas used to be fifth. Then sixth. Then seventh. Last year and this year, it dropped to 10th.

"When we update with new data, we may slip out of that," Tallman says. "We think it's a real warning sign."

Although he says it's difficult to prove, Tallman believes Kansas' current funding situation is to blame for the slow progress. While there are states that spend more on education and still rank below Kansas, every school ranked above Kansas spends more per student.

Since 2008, Kansas has ranked 39th in per-pupil funding increases, meaning they slipped from 24th to 31st in per-pupil spending.

With the Kansas Supreme Court ruling the current funding plan unconstitutional and increased government support for the addition of $600 million to education funding over the next five years, Kansas is planning to get out of budget restraints and restore confidence in its education system. But is it enough to stack up against competition from other states and school districts? What does the future of Wichita's educational ecosystem look like?


FUELING THE FUTURE THROUGH EDUCATION

Education is often described as a pipeline — from early childhood to adulthood and a career. Tallman says this pipeline has extended and connected over time in new ways.

While half-day kindergarten used to be the start for Kansas students, most school districts have now moved to full-day and also offer early childhood educational opportunities or pre-school to get students ready for full-time education. The same trend is happening on the back end of the pipeline with high schools focusing more on readying students for post-secondary education and careers.

"The school system at the other end has to be linking up with community colleges, technical colleges, state universities and, of course, in the Wichita area, you have all three as well as private institutions," Tallman says.

Johnson says an example of this pipeline could be seen on a big-picture level with the Business Education Alliance (BEA), which was formed by the Wichita Chamber of Commerce Leadership Council in 2013 before it became the Greater Wichita Partnership. The alliance brings together Wichita business leaders, educators and non-profit organizers to talk about this pipeline. Shortly after its founding, the BEA conducted studies that identified literacy and the learning of "soft skills" as vital for Wichita students.

If our schools are perceived as strong and vibrant and safe and dynamic, that adds a favorable perception of our community overall. The community and the Wichita School District can't be separated from one another in many senses.Wendy Johnson

"The WATC campus that's there now has a front yard full of utility poles," Johnson says. "It's all about working with academic partners at various points in the pipeline to support the very targeted, skill-based needs."

Tallman says the days of showing up at school, sitting at a desk, studying, playing sports and going home are coming to a close.

The more our educational system integrates with community, business and service, the more vital it is for our Four Challenges. Johnson says to support our schools is to support the future of our city.

"If our schools are perceived as strong and vibrant and safe and dynamic, that adds a favorable perception of our community overall," she says. "The community and the Wichita School District can't be separated from one another in many senses."