Watch this short video to learn more about how becoming a better neighbor can unlock a better perception for not only our neighborhoods, but our entire city.


HOW CAN THE AVERAGE WICHITAN GET INVOLVED?

It's fair to say not all of us will become entrepreneurs. And the challenges facing Wichita's business sector and talent pool may seem out of reach for most of us. This leaves the Perception Challenge, or how our city is perceived by both locals and visitors.

Becoming a better neighbor is a powerful way we can all impact that perception.

"It's easy to know 10 to 50 people and know them pretty well," says Patricia Hileman, president of the College Hill Neighborhood Association. "It's really tough when you're talking a whole city."

Getting to know those 10 to 50 people can lead to immense health benefits and save people from isolation, which the Surgeon General has labeled a major public health threat.

"Isolation is a bigger public threat than cancer and smoking cigarettes," says Adam Barlow-Thompson, executive director of SoCe Life, an organization focused on changing how neighborhoods evaluate their strengths and weaknesses. "And every person in Wichita has a neighbor who's dealing with isolation."

Isolation is a bigger public threat than cancer and smoking cigarettes. And every person in Wichita has a neighbor who's dealing with isolation.Adam Barlow-Thompson

Rather than focus on negative perceptions about a certain area — high crime rate, poverty or a lack of infrastructure — Barlow-Thompson's organization urges neighborhoods to consider what they might have to offer.

This is called asset-based community development, which was developed through research by the Asset-based Community Development (ABCD) Institute at DePaul University. Using this method has been linked to increased employment, reduced crime and decreases in things like truancy, domestic abuse and even food scarcity.

Barlow-Thompson's organization has been experimenting with ABCD in his own neighborhood of South-Central Wichita, which has a perception of being a high-crime area. When he started interviewing one of the women in his neighborhood, he thought it might be true.

A map of South-Central Wichita, which includes the South Broadway corridor.


"We knocked on her door ... [and asked] 'what kinds of interests or hobbies do you have?'" Thompson-Barlow recalls. "She looks at us and she says, 'Well, I'm mainly just addicted to cocaine.' And we were like, 'Oh, crap.'"

Instead of giving up and accepting that their neighborhood was all needs and no assets, Barlow-Thompson's intern followed up with, "Well, what else do you do?"

"And I was like, 'What a great question,'" Barlow-Thompson says. "And it draws out this other stuff from her, so she knows how to macramé and she knows about flowers because she used to work in a floral shop and all these things that she starts sharing."

From there, SoCe Life connected her to places she could get plugged in and share her gifts. Although addiction is still a challenge, this connection to the community has helped her deal with it in a healthy way.


'WILL YOU BE MY NEIGHBOR?'

Sure, we all have our circle of friends or acquaintances — maybe people we've met through work, church or hobbies — but becoming true neighbors to those around us doesn't seem to be in our wheelhouse.

Becoming a better neighbor doesn't have to be difficult or take a lot of time, Barlow-Thompson says.

"Just think of the eight front doors closest to your front door," he says. "If you go out and know the names of those eight people, that's the first step to making neighboring happen in your community."

By knowing names, we're creating acquaintances. Barlow-Thompson says turning those into relationships takes simple acts of kindness — sharing holiday treats or hosting a block party. Neighboringmovement.org is a website SoCe Life created to help spark these relationships. Each week, it shares a suggestion on how to get closer with your neighbors.

Another way SoCe Life is trying to make good neighboring easier is by breaking from the traditional organization. Instead of having main leadership in the form of a neighborhood association, SoCe reaches out to one person in each 15-house set. Those people are assigned to get to know everyone in their set and connect them to the larger community of neighbors. 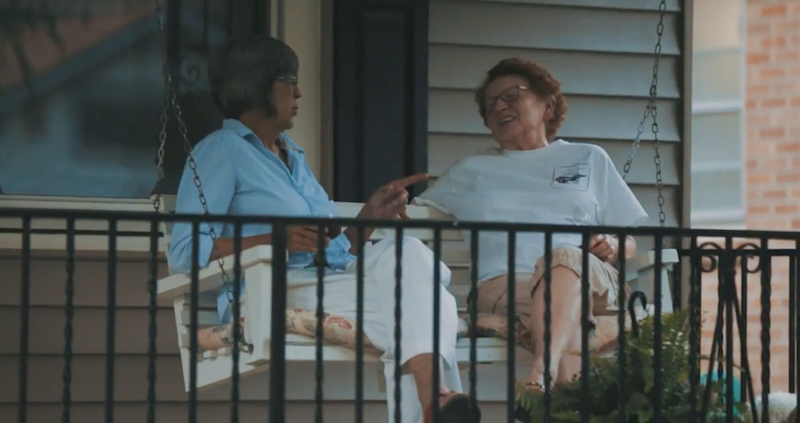 "It's a block-by-block approach where we recruit a volunteer on every block to ... draw out the abundance that exists on that block already," Barlow-Thompson says. "Our block connectors connect them to talk about the common vision and interests within the neighborhood."

This common vision can help create a pride in not just the city, but the specific neighborhood.

"I think that you just have to have pride in where you live and in yourself in order to take that pride to the city," says Lavonta Williams, Wichita City Council representative for District I. "So if we are really taking care of our neighborhoods, we're making our city strong, as well."

With organizations like SoCe Life, traditional neighborhood associations across the city and online tools like Nextdoor.com, good neighboring is easier than ever before. If everyone does their part, answering the Perception Challenge will be easier, too.