How saying 'yes' saved a landmark

How saying 'yes' saved a landmark

Why was Starlite worth saying 'yes' to? How do we continue supporting it in the future? What else do we need to say 'yes' to?

THE IMPORTANCE OF SAYING 'YES'

In his 2018 report, Reach Advisors data analyst James Chung noted Wichita's long history of saying "no" — to new investments, new opportunities and to striving for something greater than the status quo.

It was a wake-up call, a reckoning and a challenge to do something big — to say "yes" when the opportunity arose.

In October, 2018, that opportunity came when Starlite Drive-In announced it was closing. A lesser Wichita would've said, "That's that," and moved on. But instead, the community answered with action.

An anonymous Wichitan purchased the land, while Blake Smith, a Tulsa drive-in owner, purchased the business. Thanks to them, City Council member James Clendenin, who helped broker the deal, and the countless Wichitans who shared concern for Starlite, the drive-in theater is now open for the summer season.

So why was Starlite worth saying 'yes' to, and how do we continue supporting it in the future? Also, what else do we need to say 'yes' to as a community?


THE RIGHT DEAL AT THE RIGHT TIME

The south Wichita drive-in, located on the corner of Hydraulic and MacArthur, has been a part of the community for more than 60 years. It started in 1953 as the Rainbow Drive-In. After a change of ownership in 1998, it became the Starlite Drive-In.

When the announcement was made that the theater would be closing, Wichita wasn't just losing an affordable entertainment option in an often forgotten part of town. It was losing a piece of generational heritage.

"I was shocked, actually," says Clendenin, council member for District III, where the drive-in is located. "It always had done well. People supported it. The new owner, for some reason, decided that he wanted to sell the property and not continue the drive-in business, which was sad for a lot of people." 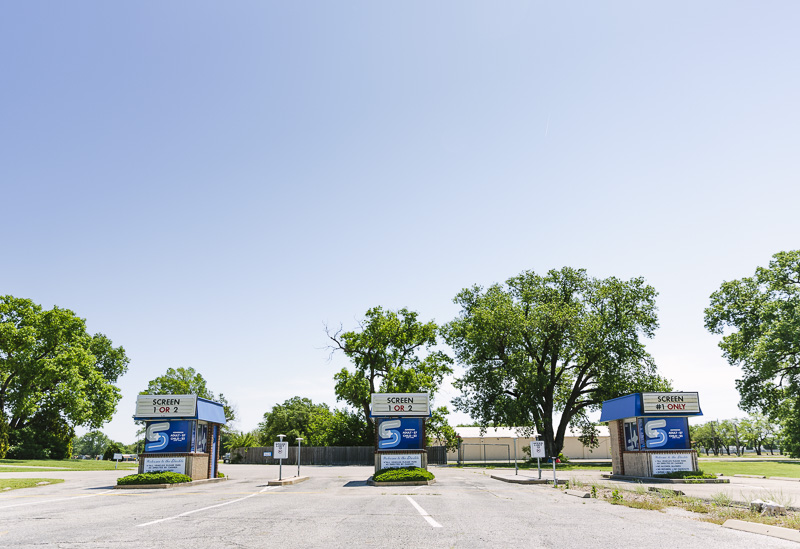 That sadness could be seen in the Facebook comments as people shared the story. It could also be seen in the demonstrations and rallies that had drive-in fans gather with signs in nearby Chapin Park. Some even reached out to Clendenin directly, asking him to stop the sale.

I was shocked, actually. It always had done well. People supported it. The new owner, for some reason, decided that he wanted to sell the property and not continue the drive-in business, which was sad for a lot of people.James Clendenin

"We can't keep somebody from building something or doing something different with a piece of private property, so it really was tough," he says. "We just did whatever we could do, and that was put a statement out."

Ahead of the Starlite Drive-In auction, Clendenin and Wichita Mayor Jeff Longwell posted a tweet on the official City of Wichita account. 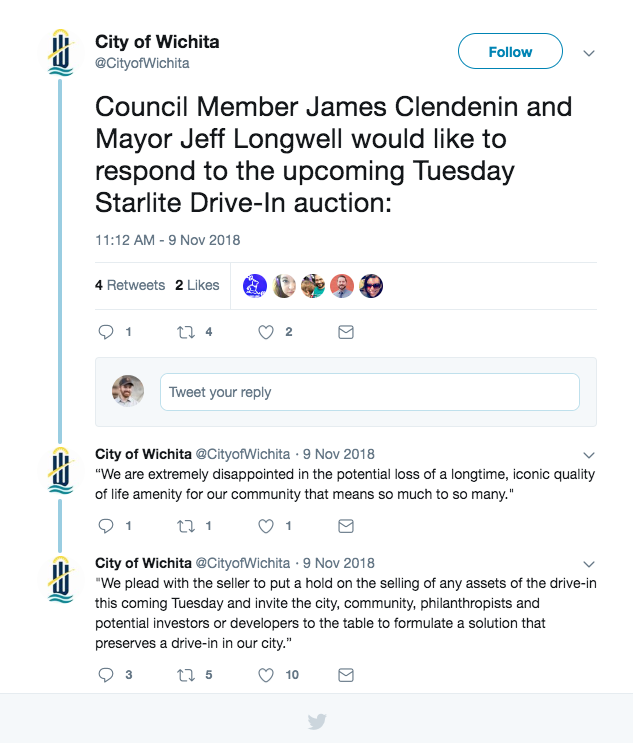 "Within a couple hours, I had a phone call," Clendenin says.

Clendenin works full-time as a business broker, so he was able to work with stakeholders to find a new owner. But it wasn't easy.

"Finding the right person to come in was tough, but we had a couple of people," he says. "When we found out the projection equipment had already been sold, one of the buyers dropped out."

Blake Smith, who owns the Admiral Twin Drive-In in Tulsa, was eager to purchase the theater, but he needed help with the cost of the land and projection equipment.

Clendenin provided a loan to Smith from his district's proceeds of the Hyatt Regency sale. The Hyatt Regency near downtown was previously owned by the City of Wichita, and was sold in 2016 with a portion of the sale going out to each district for special projects. This loan allowed for the purchase of projection equipment while an anonymous Wichitan stepped up to buy the land, allowing Smith to own and operate the business.

"His children don't even know he bought it," Clendenin says of the anonymous buyer. "Part of the reason [he did this] was for his kids. He wants his kids to have that experience."

Smith had tried to buy the Starlite theater a few years ago from the previous owner, Jim Goble. When Goble got sick, the deal went silent. When Goble died, he willed the drive-in to then-manager, Chuck Bucinski.

"It's different being an owner than it is being a manager," Smith says. "I mean, there are some things that cross over, but you've got to be prepared mentally to go through some of the obstacles of being an owner, and I don't know that he was."

Despite the Starlite being one of the best-attended drive-ins in the country, Bucinski closed the business in 2018, citing rising costs.

Fortunately, the story didn't end there, as Smith took over management and is now in his first season as owner of the Starlite. But why does this drive-in theater matter so much, both to those who put their personal time and money on the line, and to the people who enjoy attending year after year?

There is a stigma among many Wichitans about the part of the city south of Kellogg. But the drive-in brings people from far and wide to an often neglected part of town.

Clendenin says Wichita is like a diamond. Each facet of the diamond has to be cut and polished just right for the whole thing to reflect light in a way that makes it shine. If one part is flawed, the whole diamond is flawed. 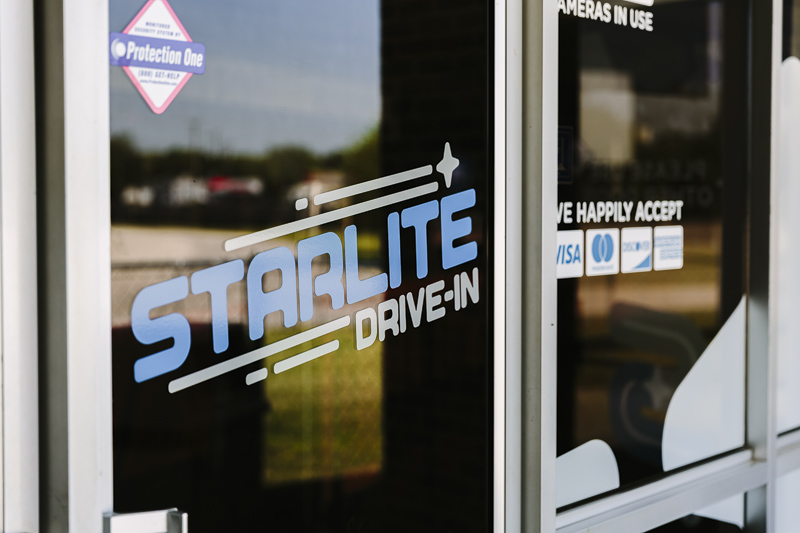 Without Starlite, south Wichita would have lost a little bit of its shine, and fewer people would likely venture down there to learn what the part of town really has to offer.

Smith says Starlite isn't just a nice drive-in theater for south Wichita. It's a nice theater for any community in the U.S. Despite Wichita having about 300,000 fewer people than Tulsa, the Starlight drive-in out-grosses Smith's other theater.

"I think it was probably a top 15 drive-in in the country by grosses," Smith says. "We knocked it out of the park on The Avengers. ... Looks like we fell somewhere 12-15 nationally I think."

Smith grew up in the industry and is a self-described theater nerd. He likes movie theaters even better than movies. Drive-in theaters are becoming more and more rare across the country, especially on the coasts.

Nationally, Smith says there are about 300 drive-ins, but most are in the middle of the country due to land costs.

"If you're from one of the coasts, you probably don't have that many drive-in theaters," he says. "I mean it's simple: Why would you take 26 acres and build a two-screen drive-in — seasonal, not to mention. So, I think it is a quality of life situation. That's what it kind of comes down to. So I think that that's why it's important for this place to stay here."

Smith says Wichita has a legacy around theaters, from Bill Warren's premium builds to Starlite's unique offerings. Without the Starlite, south Wichita — and Wichita as a whole — would lose a piece of that legacy.


HOW DO WE KEEP WHAT WE HAVE?

Saying "yes" can't just happen once. It has to be a continuous promise that we'll support what we say "yes" to.

To become the owner of the theater, Smith lives part-time away from his family — a wife and two young children — to own and operate the theater. That's a big sacrifice, and we owe it to him and others to make it worth it.

"Well it's really been fantastic," Smith says. "I've really been the luckiest man alive in a lot of ways. I didn't know what I was getting myself into, you know?"

That being said, there have been some complaints about the way Smith is running the place, including getting rid of the out-of-car speakers and only showing two movies instead of three.

Well it's really been fantastic. I've really been the luckiest man alive in a lot of ways. I didn't know what I was getting myself into, you know?Blake Smith

"I would say that they've been very grateful," Smith says. "But there's been a little hesitancy on some of the changes that I felt like we needed to make to kind of bring the drive-in a little more into the modern day." 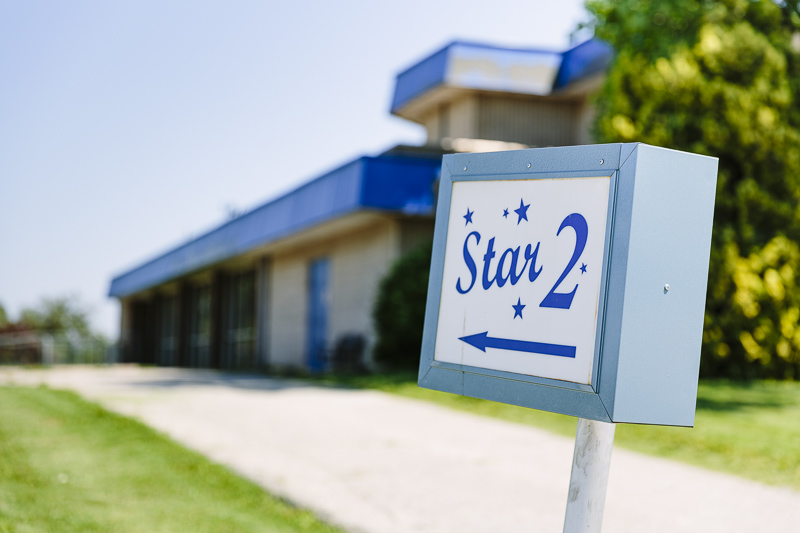 The Starlite Drive-In almost went away for good. The least we could do for the ones who saved it is give them time to make the changes that need to happen for it to last generations to come.

Those who haven't been the drive-in may be wondering why any of this matters at all. Those who have been know it shouldn't be taken for granted.

"We have assets here that people just need to support," Clendenin says. "Don't take for granted the things that are in our community."

Clendenin says in all things, Wichita needs to learn to invest in itself to keep the things it loves, and to continue to create new things for the future generations.

The Starlite Drive-In is one of the best in the country. That happened with a passionate owner, decades of community support and, in its darkest hours, vital help from the city.

The next time something like this happens, will we be ready? We might not have available funds from the Hyatt sale next time, which means we have to be ready to find new ways to finance opportunities we want to say "yes" to.

With this recipe of vision, community support, and some help from our civic officials, what else can we create here in Wichita?