As human beings, we love progress — the next step, forward motion or becoming incrementally closer to our goals. How do we make that happen?

DON'T YOU JUST LOVE IT WHEN A PLAN COMES TOGETHER?

As human beings, we love progress — the next step, forward motion or becoming incrementally closer to our end goals. To make any of that happen we need to know where we're trying to go or what we’re trying to achieve. We need a plan — goals, guidelines, objectives or a vision toward which we can make progress.

"It's important that a community be purposeful," says Jeff Fluhr, president of the Greater Wichita Partnership and Downtown Wichita. "And you do want to have deliberate strategies that are driving intended outcomes."

The Greater Wichita Partnership stands alongside the City of Wichita as one of the most influential planning organization in the city. Its mission is to connect public and private sectors to accelerate economic development throughout the Wichita region.

It's important that a community be purposeful. And you do want to have deliberate strategies that are driving intended outcomes.Jeff Fluhr

They've broken this down into three categories, each with associated strategic plans of their own. Jobs are driven by the Partnership's Regional Growth Plan. Quality of place is driven by Project Downtown and Project Wichita. Talent is driven by the new Talent Marketing Blueprint. 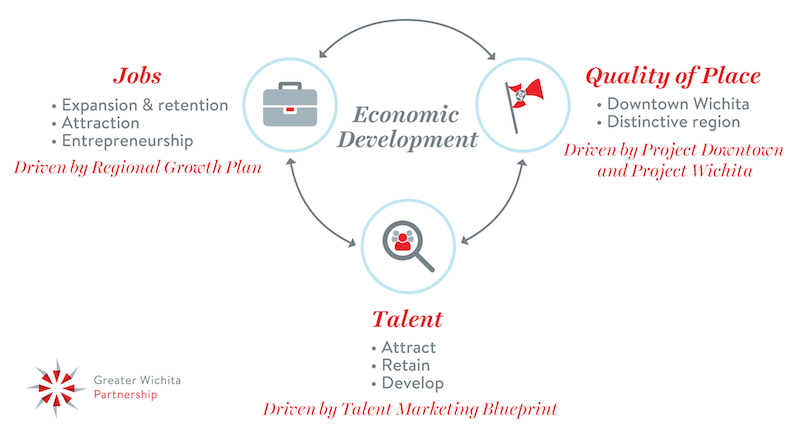 "These areas are being driven intentionally by these work plans that have been created," Fluhr says. "The beautiful thing about doing all these simultaneously is that there's a very strong integration that's happening. And it's purposeful so that, as we're working on talent, there are things that it's driving in the Regional Growth Plan, and vice versa."

With strategies covering such a wide range of Wichita's economic health, it's important for the Partnership to get support from the entire community — from big and small companies across the region to the elected representatives on the Wichita City Council and the Sedgwick County Board of Commissioners.

Not everyone always agrees on the strategies to use, or even the outcomes that are most desirable. Planning is a team sport, and requires compromise, research and extensive community buy-in.

So how do organizations like The Partnership and the City of Wichita go about planning in a way that creates this community-wide vision and direction?

Like the Greater Wichita Partnership, the City of Wichita can't operate in a vacuum. Goals, strategies and funding considerations require input and, ultimately, buy-in from taxpayers.

"When I look at the community, and we talk about creating a vision, it has to be a shared vision for it to be successful," says Robert Layton, city manager for the City of Wichita. "We may be the instigator of the discussion, but it has to have broad community input and support before a plan is adopted by the city council, county commission or whoever's involved."

Layton breaks down planning into two distinct categories: strategic and tactical. Strategy is defined mostly by that community vision — what the end-goals are and why. Tactical is defined as the implementation of that plan. He says it's important to have the community buy-in on the strategy side so that the tactical plan can implement that plan smoothly.

"You just have to make sure though that long-term vision is a shared vision, and a lot of people have an opportunity to input into it," Layton says. "I think there's greater expectation on the part of the citizens that they be involved in the formulation of vision. ... Because of social media ... there are easy ways for people to have voices, to have their voice heard, right? And so there's an expectation that they will be heard."

Fluhr says that buy-in will ensure better implementation, because the people entrusted with the plan took part in creating it.

You just have to make sure though that long-term vision is a shared vision, and a lot of people have an opportunity to input into it.Robert Layton

"They [have to] see how they fit themselves into that equation," he says. "And then they take ownership, and ownership is key."

Creating this ownership is not easy and is rarely cut and dry. The city has recently been scrutinized for a lack of transparency surrounding the downtown baseball park development and for including contentious items on the consent agenda of council meetings. At the same time, the city was recently recognized with a Voice of the People award for their efforts on community engagement.

"We have a long way to go still to be really good at this, but we are recognized as a national leader in that regard," Layton says. "So I felt really good about that."


ADAPTING TO AN UNCERTAIN FUTURE

Community buy-in isn't the only hurdle to crafting successful plans. Plans looking decades into the future also have to consider the pace of change.

"We deliberately use the word 'blueprint' in a lot of things that we talk about," Fluhr says. "Blueprints are open to modification. They're open to revision. They're not a document that you say, 'It's a hard, fast and it cannot change.' ... There are going to be new dynamics that shape them."

Project Downtown was originally devised in 2009-2010, when the world economy looked very different than today. Other factors have also impacted downtown Wichita, including the activation of Union Station and the relocation of Cargill Protein's headquarters. But as those outside factors change, the vision has to stay true.

"The guiding principles probably hold true — I mean, those are foundational," Fluhr says. "But how you translate those foundational things into the physical built environment — those avenues may change over time."

With the downtown master plan in particular, implementation became more about seizing opportunities that brought downtown closer to that 20-year vision than taking a step-by-step, set-in-stone approach.

The guiding principles probably hold true — I mean, those are foundational. But how you translate those foundational things into the physical built environment — those avenues may change over time.Jeff Fluhr

Layton recalls helping create that blueprint in 2010 and then assigning a city staff member to review proposals and work directly with the Partnership as part of the city's larger comprehensive plan. This staff member was able to use that master plan as a blueprint for which opportunities to pursue.

Fluhr admits that at the pace things are changing today, 20 years may be a little too long-term for future strategic plans.

"There will be appropriate moments where we'll look at [a plan], and recognize we need to take it to the next level," Fluhr says. "Because, whereas we've talked about Master Plans being a 20-year vision, I think we're getting into a community that says, 'We say that, but we want to do it in 10,' or 'How do we make it happen sooner?'"

While looking far into the future can make planning a lot more complicated, it can also offer a boost in morale — especially in communities eager to take advantage of opportunities to create change.

This is especially prevalent in cities like Des Moines and Omaha, which have been able to leverage their community visions and plans to mobilize their businesses, organizations and individuals.

Omaha's 'We Don't Coast' campaign has been widely adopted as a rallying cry for residents and a marketing slogan to outsiders, showcasing an anticipation and excitement for the future.

"Those cities, when they started to see the success, very much like what we're seeing, they didn't let up," Fluhr says. "So I think that's the beauty of Wichita right now, is that the story is still being written, and there are many more chapters to come. And people can lean into the pages, and write the history of what happens in this city."

This eagerness to jump in and take advantage of the current momentum can be seen in responses to things like Project Wichita and the Riverfront Legacy Master Plan. More than 14,000 people responded to the Project Wichita surveys, more than double the anticipated response.

That's the beauty of Wichita right now, is that the story is still being written, and there are many more chapters to come. And people can lean into the pages, and write the history of what happens in this city.Jeff Fluhr

"I believe that people responded because they had an interest, and they want to see their city thrive," Fluhr says. "I think visions and plans help demonstrate that to people."

Visions and plans aren't just about getting things done. They're about creating inspiration, excitement and a hope for a more vibrant future. But in order for them to do that, the community has to be involved.

Review the report from Project Wichita, and engage with the Riverfront Legacy Master Plan. Make your voice heard and take part in the collective vision that moves us forward.

A vision only works if we all share it.