The economy dominates headlines, as well as our everyday considerations and conversations. Whether or not we buy a home, accept that job offer or finance that new appliance are all determined by — among other things — economic conditions.

The diversity of an area's industries, jobs and human capital can significantly impact its overall economic health. In his research, analyst James Chung of Reach Advisors states that Wichita's economy lacks the diversity it needs to weather recessions and recover quickly following those recessions.

The health of the local economy is very reliant on aviation manufacturing and a large concentration of the workforce is employed in this sector. This creates a volatile economic landscape tied to swings — both up and down — in the aviation industry.

Despite the improvement, Wichita still lags behind many of its Midwestern peers, including Des Moines, Oklahoma City, Omaha and Kansas City.

The challenge of achieving economic diversity is more complex than simply the number of industries represented in a given economy, says Andrew Nave, Executive Vice President of Economic Development for the Greater Wichita Partnership.

He says economic diversity could also refer to the categories within each industry or the types of jobs available within an economy.

When it comes to economic diversity, most of us think about the types of industries that exist within a community or region.

Despite a broad group of industries, nothing in Wichita really compares to aviation, with hundreds of industry suppliers and tens of thousands employed.

"Some [industries] aren’t that scale in terms of numbers, but are just as robust," Nave says. "IT and data services are growing very, very quickly. ... We have unique strengths in all of these."

Finding these strengths and putting them into the minds of companies is what Nave, The Wichita Chamber of Commerce and others do every day, through BREG and other plans, to attract more jobs to Wichita.

In his research, Chung points out that Wichita's concentration on manufacturing has tied the area's economy to an industry with comparatively higher volatility and lower output. Healthcare is on the far other end of the spectrum with low volatility and high output. 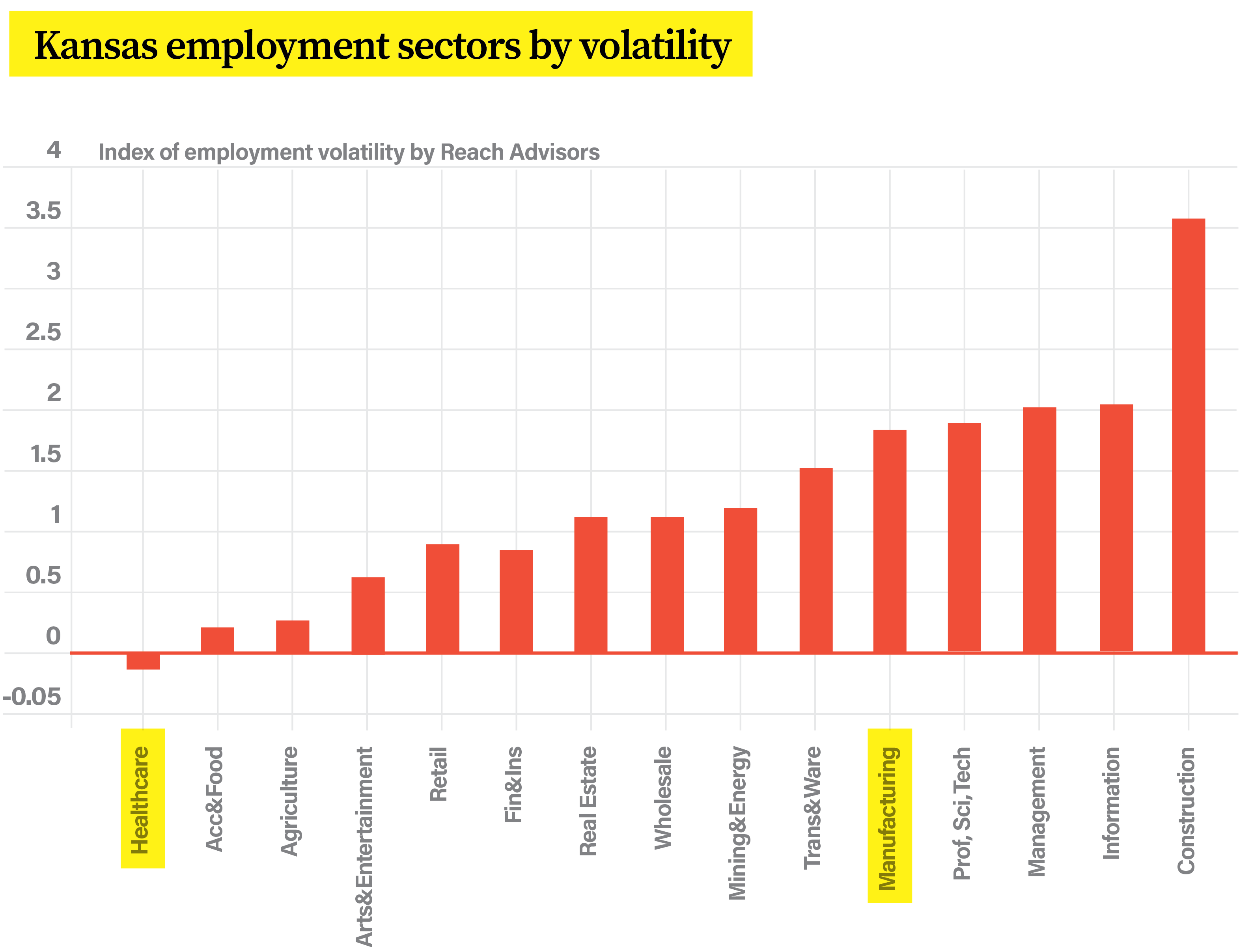 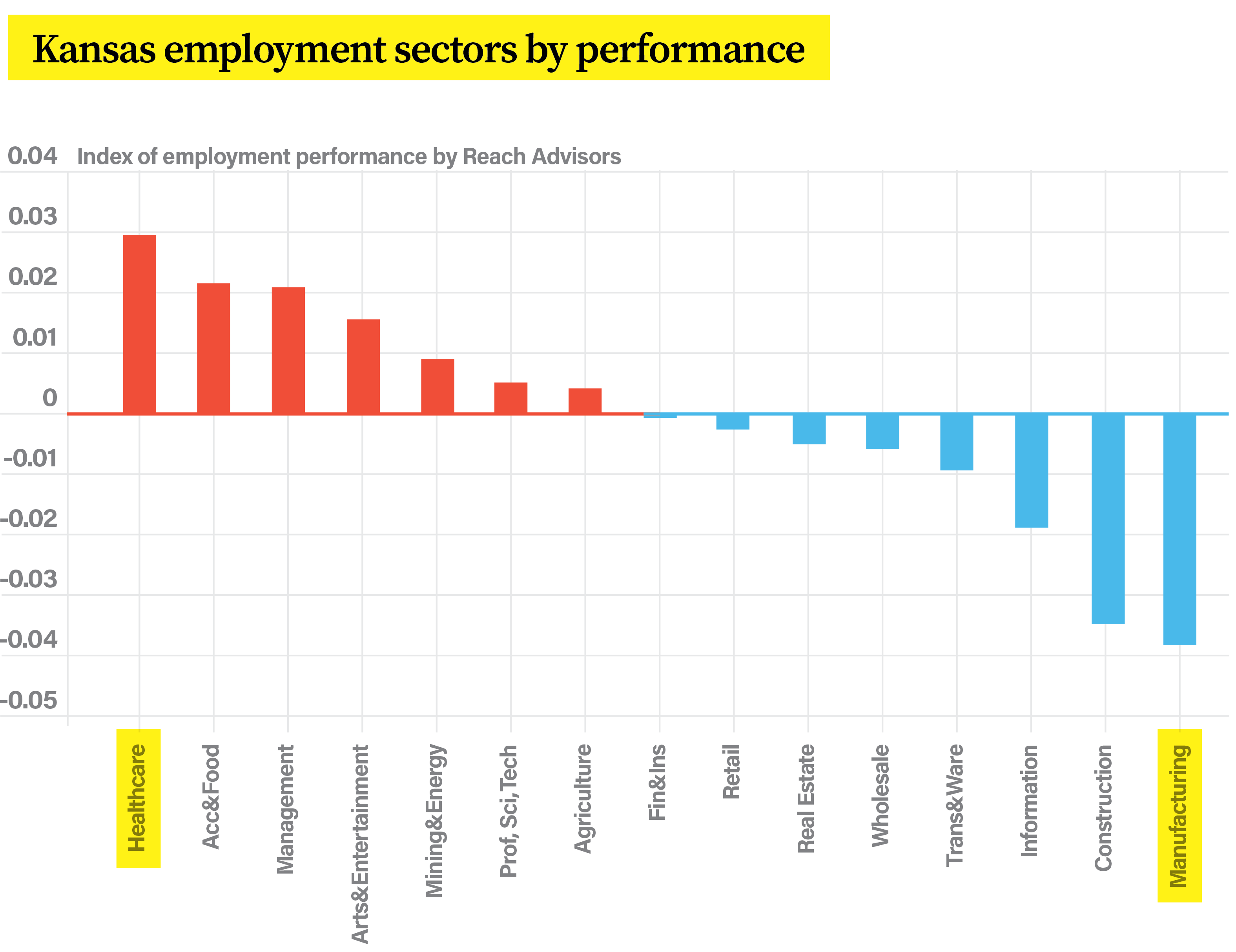 Fostering healthcare in Wichita is another challenge in itself. Nave says the industry currently represents about a third of the entire U.S. economy.

The answer may be to focus on specific categories within a given industry.

Nave says one way Wichita is saved by its dependence on aviation is its breadth of diversity within the category. While there's certainly a focus on general aviation, suppliers and manufacturers also deal with commercial and military applications.

Nave says the Greater Wichita Partnership focuses on growing the industries and clusters that have the most potential for growth in Wichita.

"There are all kinds of places you could go fishing for more activity and more companies and growth, but if the pond is a fairly shallow pond, is that the best use of resources?" he says.

Wichita is competitive in terms of cost, but it takes more than just a low cost of doing business to attract some of these companies and industries. In cyber security — and many other industries — Wichita's strength has to be talent.

Talent is everything when it comes to attracting new business, Nave says.

"Almost every industry I talk to now, the focus is about talent," he says. "It makes common sense. Labor is the highest cost center of just about every operation. Nothing is bigger than labor, so it's their number-one concern."

One area where Wichita has an advantage is higher education. In cyber security, for example, Nave says they're focusing on Wichita's university programs, as well as its connections to McConnell's cyber division.

How companies grow and thrive is with people. And people have lives. It's really no more or less simple than that.Andrew Nave

Butler Community College, Wichita State University and Friends University all have programs now focusing on cyber security. If Nave and others can show companies that they will have a pipeline of talent in Wichita, it may be enough to convince them to relocate.

Talent is becoming an ever-growing issue because of the improving economy. As unemployment goes down, employees are harder for companies to find. Educated workers also typically have more choices, making it tougher for companies to compete for top-tier workers. The same goes for cities.

"I think the one we hear a lot from employers is just kind of unawareness of the market," Nave says. "Certainly on the coast and other places, they just haven't been here; they just don't know it."

"How companies grow and thrive is with people. And people have lives," Nave says. "It's really no more or less simple than that."