When Wichita put on its first Open Streets event in 2017, it changed our city's perception of neighborhoods and likely strengthened the bonds between neighbors.

When Wichita put on its first Open Streets event in 2017, it changed our city's perception of neighborhoods. And it likely strengthened the bonds between neighbors.

By closing down a four-mile stretch of Douglas Avenue for a Sunday afternoon, it opened up a new world of possibility for walkers, runners, cyclists and Wichitans curious to see their city from a new perspective.

"I think it's part of making a change in the community," says Troy Houtman, Wichita Park & Recreation director, and lead organizer of Open Streets ICT. "As people are starting to find what their community is all about — finding out where the hidden gems are in their community — you're not going to get out there by driving. You have to walk places."

As people are starting to find what their community is all about — finding out where the hidden gems are in their community — you're not going to get out there by driving. You have to walk places.Troy Houtman

"[Open Streets] democratize our streets, really," says David Simor, project manager for 8 80 Cities, a Toronto-based nonprofit that promotes the Open Streets concept across North America. "Streets really then can become a platform for us to start to imagine what our streets could be — to provide the platform for us to start to really think about who our streets currently function for and how they might function better."

The first Open Streets ICT event was a success and made way for a second annual event, as well as a Cinco De Mayo version in the Nomar district. Houtman says the Open Streets concept is in flux and could be brought to other Wichita neighborhoods throughout the year.

"The Nomar one was very successful — they want to do it again," he says. "How can we say no? Maybe we add a third one. Maybe we add a fourth one and try some other neighborhoods. I think it's a great model that we see in Los Angeles and some of the other places because people get a chance to go visit a different neighborhood."


FROM BOGOTÁ TO WICHITA

Wichita isn't the first city to open up its streets to its citizens.

"By our best estimate, there are, just in Canada and the U.S., upwards of 130 different Open Streets programs in different cities," Simor says. "Possibly hundreds more in Central and South America."

The concept likely started in Bogotá, Colombia in 1974. Gil Penalosa, who was then the commissioner of parks for the city, wanted to create a central park, but the city lacked the land and resources. Instead, he used the city’s streets to create a pop-up park called Bogotá Ciclovía. Ciclovía is Spanish for bicycle path. 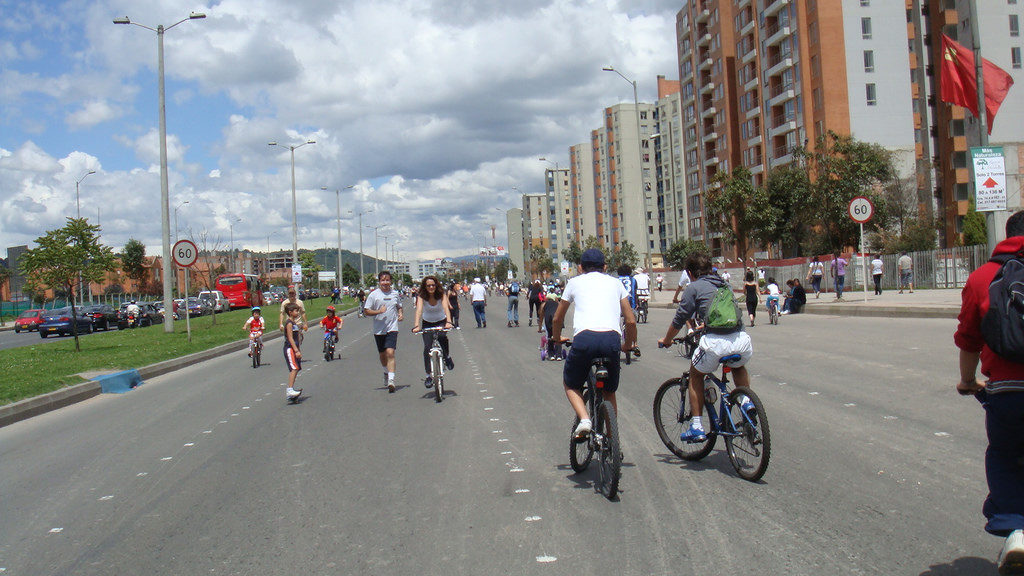 Over the next few years, the Ciclovía developed into a weekly event, taking place every Sunday of the year across 75 miles of city streets. To this day, 1.3 million people engage in the Ciclovía each week.

Penalosa later founded 8 80 Cities in Toronto with the idea that cities should serve everyone from ages 8 to 80, rather than just those able to get around in motor vehicles.

By opening up the city to everyone, real change can occur, Simor says. This is evidenced in Bogotá, where sectarian violence has plagued the city for the better part of a century. Research regarding the Ciclovía found that those who attended the event were 60 percent more likely to help a stranger on the side of the road, and others were 74 percent more likely to trust someone if they knew that person attended the Ciclovía.

Streets, as they are today in most of our cities in North America and around the world, are very car-centric. We try to move as many cars as fast as possible and that's pretty much it. ... It's a very exclusive way of thinking about our streets.David Simor

"Those data points have always stuck with me as real, concrete proof that streets can bring people together rather than separate us, the way they often do now with their car-centric planning point," Simor says.

From Central America, the Open Streets concept has spread across the world. Los Angeles, which has taken the concept furthest in the U.S., now hosts several Open Streets events each year in various neighborhoods across the city.

In Wichita, the concept has been embraced. But that embrace didn't necessarily come easily, and Open Streets still faces many obstacles in Wichita and across Canada and the U.S.

Getting Open Streets started, funded and staffed was a difficult process involving many stakeholders and significant amounts of persuasion.

Houtman, who worked in Austin, Texas, before coming to Wichita, says he has had to learn different ways to share novel concepts to a city that is sometimes resistant to trying new things.

"When I was in Austin, we'd pull out a new event or try something different and people were like, 'Yeah, we'll get right behind it,'" he says. "Wichita is a little bit different. We had to learn how to ... educate people in the community. That was something that I really learned, and I'm getting a lot better at it now. I know who the players are. I know who the influencers are."

The first challenge was funding. Fortunately, a small grant came from the Wichita Community Foundation, which gave Houtman a solid foundation to seek other sponsors. 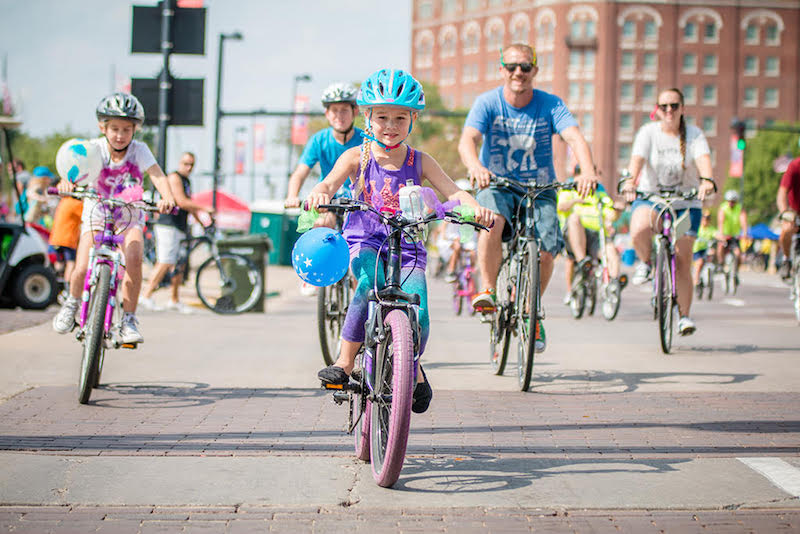 Then there was getting police support. Because the route was four miles along Douglas Avenue, there were more than 300 intersections that needed to be blocked off, requiring the assistance of the Wichita Police Department.

"The first meeting I had with the police department, they looked at me like I was crazy," Houtman says. They thought, 'Yeah, okay, two blocks. We'll help you out with two blocks.' When I told them four and a quarter miles, their ears just exploded. It was hilarious. It was so much fun."

Now that Open Streets has been a success, Houtman says approvals have come easier. But a desire to grow the concept and make it more frequent faces resistance. Simor says nearly every city in Canada and the U.S. faces the same challenges.

The first meeting I had with the police department, they looked at me like I was crazy.Troy Houtman

"It's still a fight here in Toronto," he says. "We had our first program in 2014, and then we've had two a year every year since, but it's still been a battle every single year to get funding to maintain what we have — not even talking about sort of growing beyond that regularly occurring program."

Simor says there's another challenge when it comes to policing. You need the event to be safe, but the higher the police presence, the less welcoming it can feel to some.

"You want to create an Open Streets program that is obviously open and accessible to everyone," he says. "But when you've got a massive police presence, that's definitely a strong message to communities that don't have a strong relationship with police." 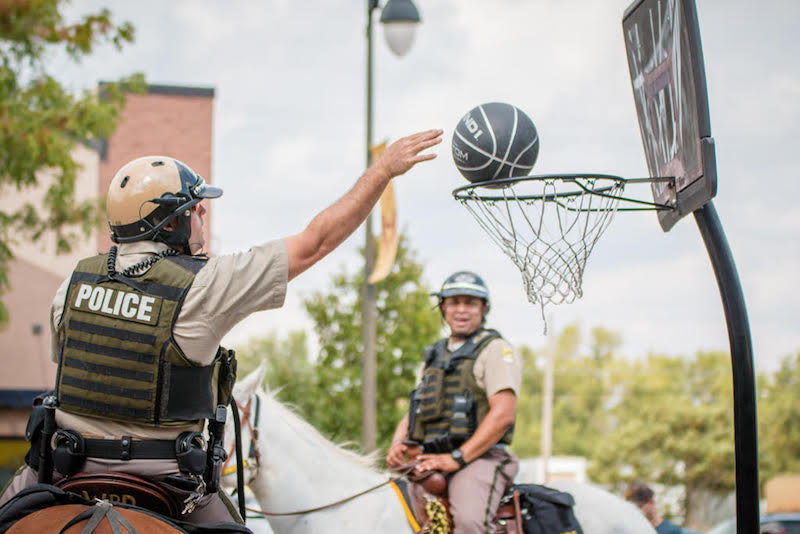 Open Streets is not an easy thing to wrap a city's consciousness around. And why should it be? It's essentially undoing everything we've been taught about how streets operate.

"So that kind of change is never easy, and it's never unanimous," Simor says. "We're talking about changing 70 or 80 years of habits about what our streets should be doing and who they should be for. ... But there are definitely some cities that had an easier time adopting it than others."

Simor says Wichita should be proud of what it has been able to accomplish with its Open Streets program. Four miles of roadway is a great start. The fact that the concept is already spreading to other neighborhoods is a good sign, as well.

But Open Streets is still lacking a champion in North America, he says.

"The more sobering news is that almost all of these programs are stuck in the same place that we are here in Toronto, where it's five to six miles, twice a year — maybe," Simor says. "In order to unlock all the great benefits I've talked about with Open Streets programs, ... you have to have a program that is regularly occurring, the way they happen in Bogotá and Guadalajara, [Mexico]."

Even Los Angeles, which has the weather and political will to make Open Streets a regular part of its city life, struggles to put on regular events, Simor says.

The opportunity is there for a city to become the model for North America.

"There is an opening there for some bold city to step up," Simor says. "To really be a trailblazer and a champion that other cities in Canada and the U.S. look toward with envy." 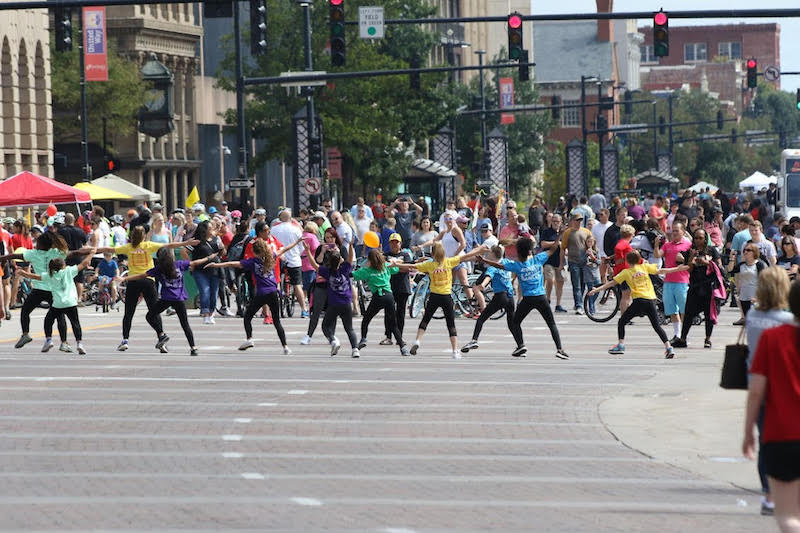 Fortunately, Houtman is far from done with Open Streets ICT. This year's event will expand on the success of past years, making small changes to accommodate problems they've encountered in the past.

I think there's an incredible opportunity there for a city to be the first — to be the leader, and to really be a trailblazer and a champion that other cities in Canada and the U.S. look toward with envy.David Simor

"[Open Streets] was a nice ice breaker," he says. "I think we're becoming more and more active, and we're seeing more and more interest in some diverse activities. I think that's pretty exciting."

Events like these don't have to be relegated to Kansas City, Denver or Austin. They can and should take place here in Wichita.

"Why can't we do things [like Open Streets] here?" Houtman says. "I think these things are becoming more prevalent, accepted and maybe even expected. ... I really think it gave us this opportunity to say there's anything we can do."

This year's Open Streets event will take place from 12:00 p.m. to 5:00 p.m. on Sunday, September 22, along Douglas Avenue between College Hill and Delano. Attend to see your city — and the people within it — from a different perspective, and maybe even get inspired about other future possibilities.