Join Spencer Steinert and Jared Goering, founders of Vytal, as they talk through everything that has happened since the end of their Startup Diaries entries. 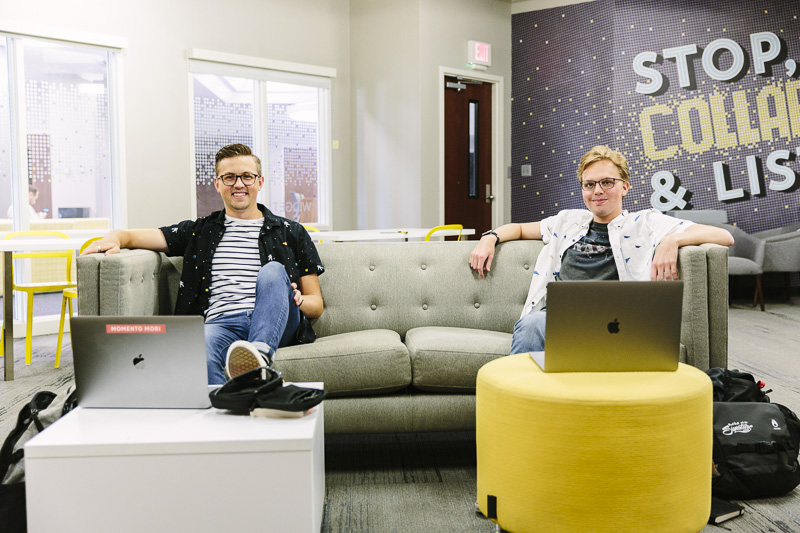 A lot has happened in the year and a half since Spencer Steinert and Jared Goering, founders of Vytal, ended their weekly Startup Diaries posts. They have moved away from their idea of a wearable heart rate monitor, toward bolder ideas on the intersection of human biology and technology.

We caught up with Spencer and Jared in the Widget meeting space at Wichita State University's Center for Entrepreneurship to learn more about how things have been going.


Obviously, a lot has happened in the year and a half since we've met. Could you give us a bit of a recap?

SPENCER: So, we were working on Vytal last time we talked, which was an adhesive biometric monitor for athletes. As we were kind of developing that out and coming closer to a finished product, we partnered with another company that was wanting to integrate it more with elderly care, which was really awesome for them.

Just around that time, though, we started to realize that the future of biometrics and wearables was changing. It wasn't as much on the consumer side, where everyone's got a Fitbit — everyone's got something. It was becoming more tangible, so we took the merge with that company as an opportunity for Jared and me to actually exit and start working with some technology here at Wichita State on the new future of what we saw biometric monitoring would be.

What was it like to exit from a company you founded? How did that go?

SPENCER: We started working with this other company. They started to really get into our technology. They were really interested in the development team that we had put together from Chicago. They were a great, great development team, but we saw they were very stuck on Vytal. They weren't really open to moving into a more tangible direction like we were wanting to.

And so, we kind of took that opportunity to just say, "It's been great working with you all. This company over here is really interested in what you guys are doing so we're going to kind of put you two together, and then Jared and I are going to go start something a little bit fresher."

They've started a lot of really cool momentum and progress toward elderly tracking, so it's great.

JARED: They seem to be doing very well, which is great.

SPENCER: It's not like it was this $5 billion contract, but it was enough to cover some of the engineering expenses that we had and some of the startup costs. 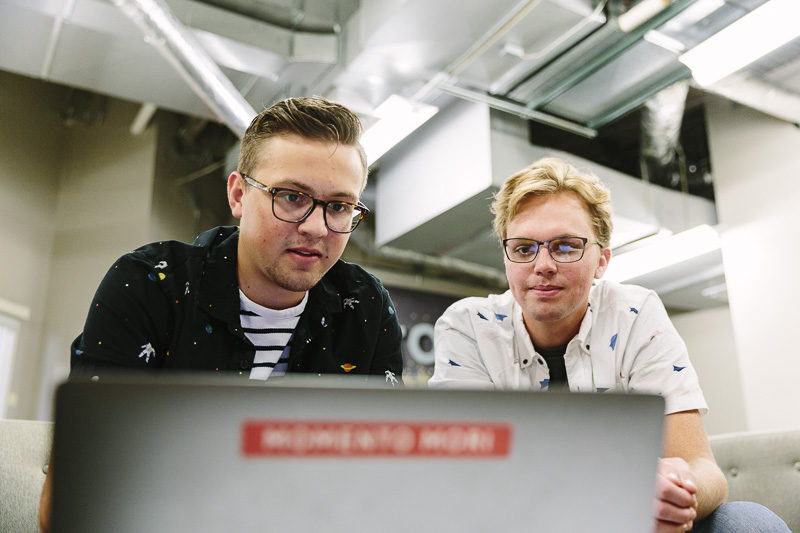 So what did you tackle after leaving Vytal?

JARED: We went into working with tech here on campus that was developed with NASA. The tagline for it was "biometric monitoring temporary tattoos." It was basically a conductive ink that you put on, like you put on a normal temporary tattoo, that would monitor things. We were targeting heart rate, to begin with, but, in the lab, we were picking up things like blood pressure, changes in blood sugar, and it was actually developed for inner cranium pressure, so concussion monitoring, that kind of stuff.

So, it's super awesome technology. With that, Spencer and I kind of came in to help bring this technology out of the lab and into the real world.

SPENCER: With this technology, we started Cy5 in January of 2018, so about a year and a half ago.

JARED: And with Cy5, we were able to partner with Red Bull, actually, through their Launch Institute.

We were one of three companies in the world that got to have this one-time experience with Red Bull in New York City.

SPENCER: We got accepted to the Launch Institute in about May of 2019, and we had the opportunity to work with Fahrenheit 212, which is essentially an innovation consultant firm — a really, really large company, and that's based out of Europe and has a big office in New York City. 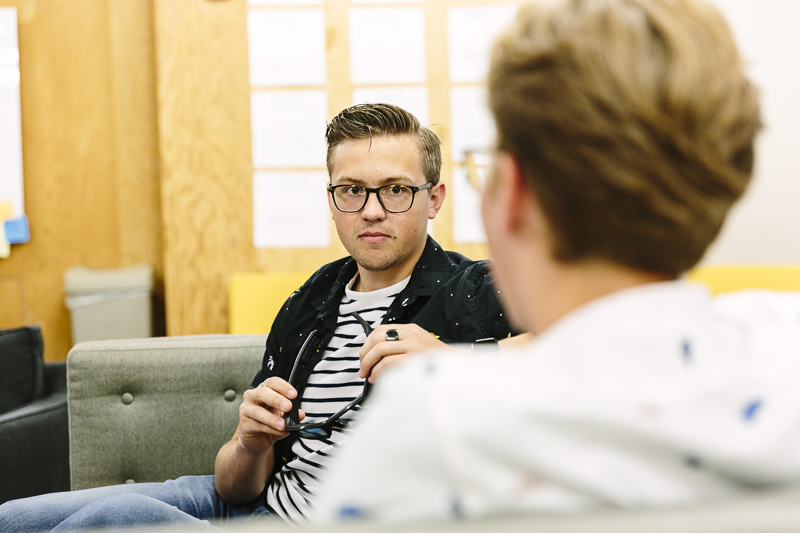 JARED: In New York, the first half of the trip was meeting with Red Bull, their exec and marketing teams. Then the second half of the experience was working with Fahrenheit 212. We worked on everything from business strategy to branding and messaging and all that. So, we kind of came in with this really cool technology and a bit of a vision for it, and through this experience, we got onto an extremely strong direction going forward.

What was next for Cy5 then?

JARED: Red Bull took us out to TechCrunch Disrupt in San Francisco, where we exhibited for three days. We were in the Red Bull Pavilion at TechCrunch Disrupt, and it was awesome. I mean, it was one of the coolest experiences of my life.

SPENCER: We saw more progress in Cy5 in the nine months that we ran it than we did in the four years that we did Vytal. I think a lot of that is attributed to the really cool technology we were using but also our ability to take the experience we had with Vytal and spin it and apply it to something new and different, which is really fantastic.

So why aren't you still running with the Cy5 idea?

SPENCER: Unfortunately, we ran into some intellectual property issues around some of the licensing. We had the option to fight it or move onto the next thing, and at that point, as much as we wanted to fight it, we knew we didn't have the resources.

JARED: Because the issues were with NASA. It wasn't another small startup or anything that we would've been going against. 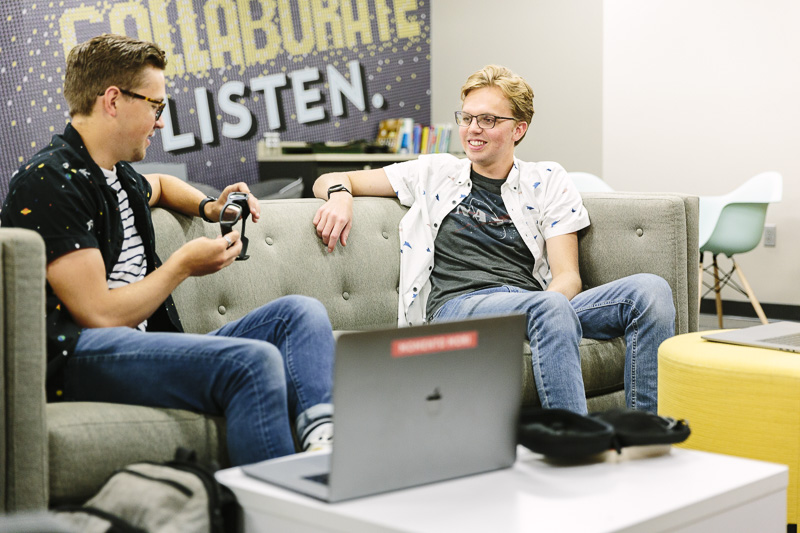 I know you guys are big NASA fans. Jared, you're wearing a NASA shirt right now. Did this whole intellectual property thing put a dent in that for either of you?

SPENCER: No. NASA's gotta do what they gotta do, right?

NASA's goals for what they're trying to accomplish in space exploration, combined with SpaceX, and some of the other companies that are working on it, are really where I see myself in the next 10 years. In the next 10 years, I want to be working on space projects. Whatever that looks like. 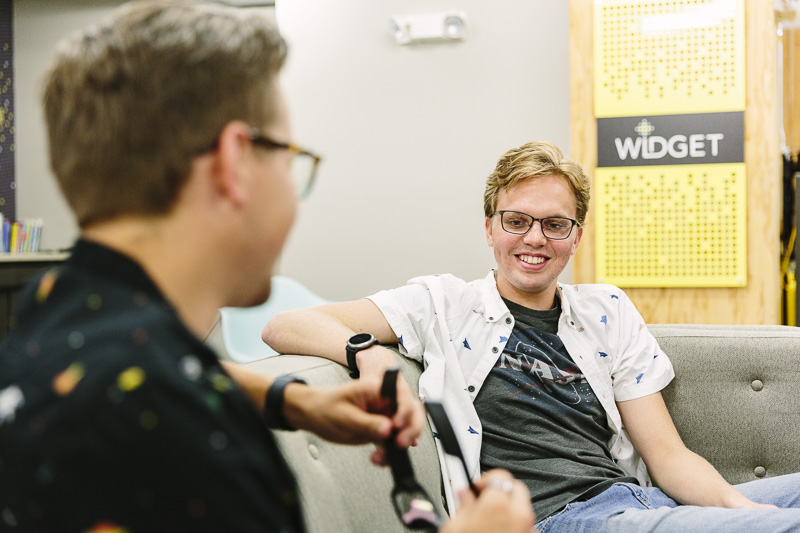 On top of all this, you guys have been studying with the WSU Master's in Innovation Design Program. How's that going?

SPENCER: I graduated in May, and Jared will graduate in fall. But I'm still around. I still engage in some of the things going on, and I'm sure Jared will, too, after he graduates.

After Cy5, how did you guys pivot?

JARED: We kind of sat down and talked. We were like, we've been in sports tech and sports science for so long now, and we have all this built-up knowledge and connections and experience with that. Can we take that experience to something else? And basically, that's where the discussion of working within e-sports comes from. So, we want to take that sports science knowledge and connections and bring it to e-sports.

JARED: Yeah, not to mention we just like gaming, also.

SPENCER: So that's where Ping comes from. 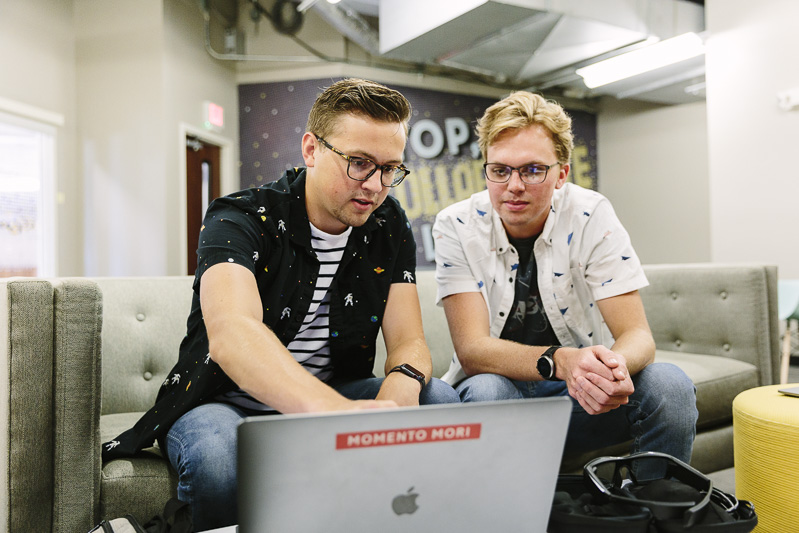 SPENCER: That's one of the apps we're working on right now.

JARED: The overall concept for it is basically doing e-sports athlete assessments. With a professional athlete, you can have them go do a 100-meter dash, and you can tell that they're going to be pretty good at most sports. There's not that equivalent in gaming right now.

So it's kind of like an NFL combine for gaming?

SPENCER: Some of the things that we're tracking are reaction time, impulse capture, multi-object tracking and inspection time.

So you guys are still focusing on that bridge between technology and human performance?

JARED: Yeah, I mean, it really kind of all stems from that same place.

SPENCER: The other project that we'll talk briefly about is called Sentio. Essentially, what we are doing is we are taking augmented reality glasses, so glasses that overlay information in front of you, pairing it with AI, and then creating real-time subtitles for hearing impaired people.

So they'd be able to process words from people in a room and display it right in front of you if you have issues hearing, or you can't hear at all. So we're trying to bridge the gap between people feeling like they have a disability and just providing them with really cool tech that they are proud to wear on their face.

You guys have experienced a lot, especially for your age. Any advice for other Wichita entrepreneurs?

Honestly, the biggest thing is to just go do it.

JARED: You can look at what we've done, and you can see that it's not always going to work out the way you thought it was going to. And that's okay. That's part of it. Failure is not a dirty word.

SPENCER: I think that comfort is the enemy of ambition. So I think as soon as you become comfortable, and you're good with where you're at, your ambition starts to dip.

You have to constantly make yourself uncomfortable so you're willing to work a little bit harder, and I think that that's just something that people need to understand. I think that's one thing that Wichita kind of lacks, is that it's very easy to become comfortable here because it's a big city with a small-town feel. But it's easy to get a pretty good job here. It's easy to just go through the motions of everyday small-town Kansas, right? But it's putting yourself in an uncomfortable situation where you have the opportunity to grow and do something new that will really move you forward.


This interview has been edited for length and clarity.