Government can get confusing. Use this guide to see how our government is set up, so you know exactly what your vote is going toward.

Democratic government can be daunting — especially at the local level. Knowing and researching your representatives, where to vote and when to vote takes a lot of time.

To make it a little less intimidating, we’ve visualized Wichita's local government, so we can understand how it works and who gets trusted with what when we vote.

So let’s take a look at how our government is organized. 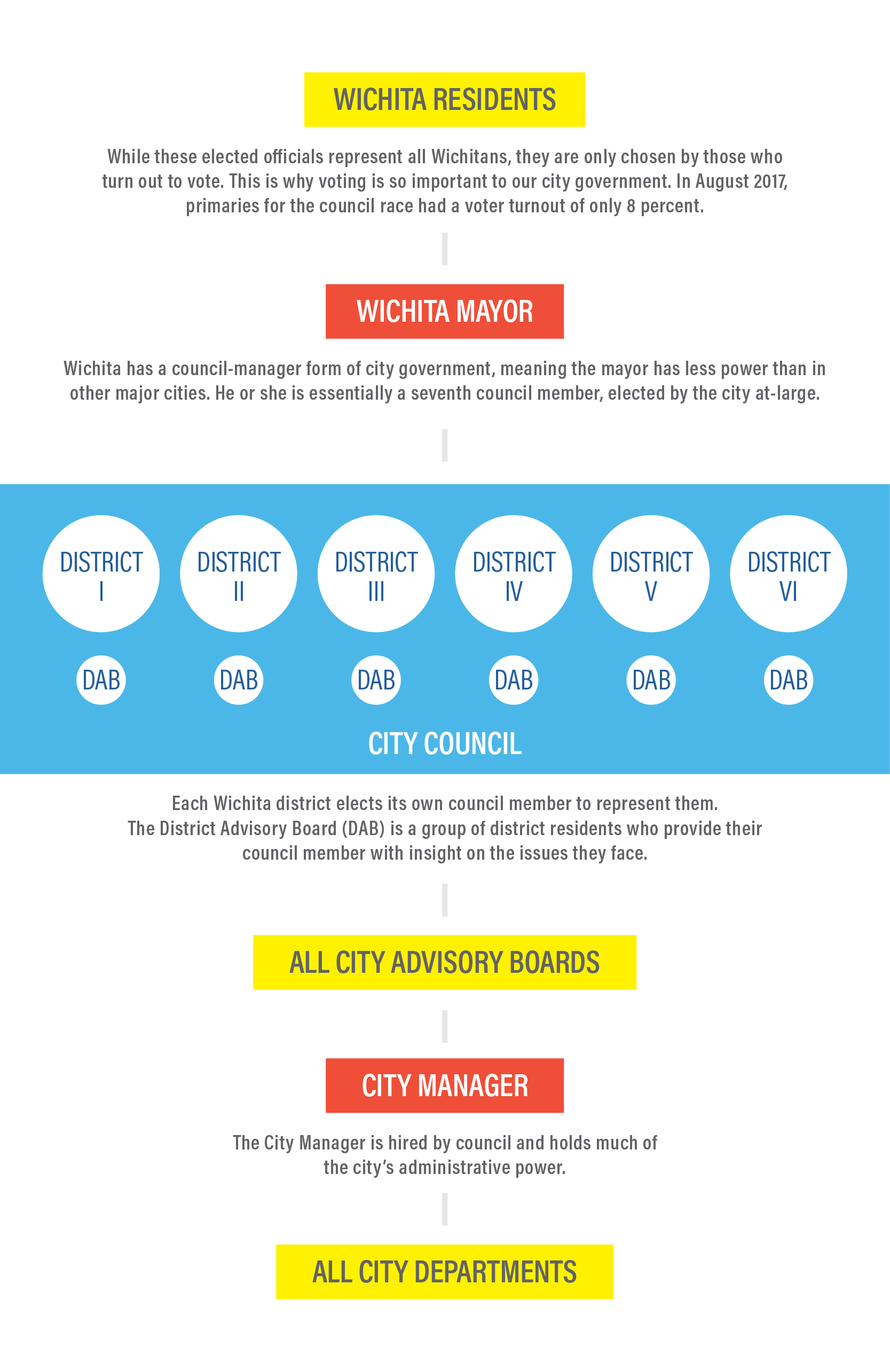 This is generally how it works in Wichita and many other city governments. We vote for elected officials, including the mayor and City Council members, and they hire a City Manager to run the city on a day-to-day basis.

This mayor-City Manager setup means that we have a "weak" mayor, or one who has less power than in say, Chicago or New York City. Instead of being the main administrator for the city, our mayor is more of a seventh council member, elected by the entire city rather than a single district.

Our City Council members get to make the major decisions, including voting on a city budget and creating new ordinances and laws, based on recommendations presented by the City Manager and other city staff to our elected officials in public meetings.

Broken down even further, you can see just how much the City Manager oversees — from parks to police to the airport. 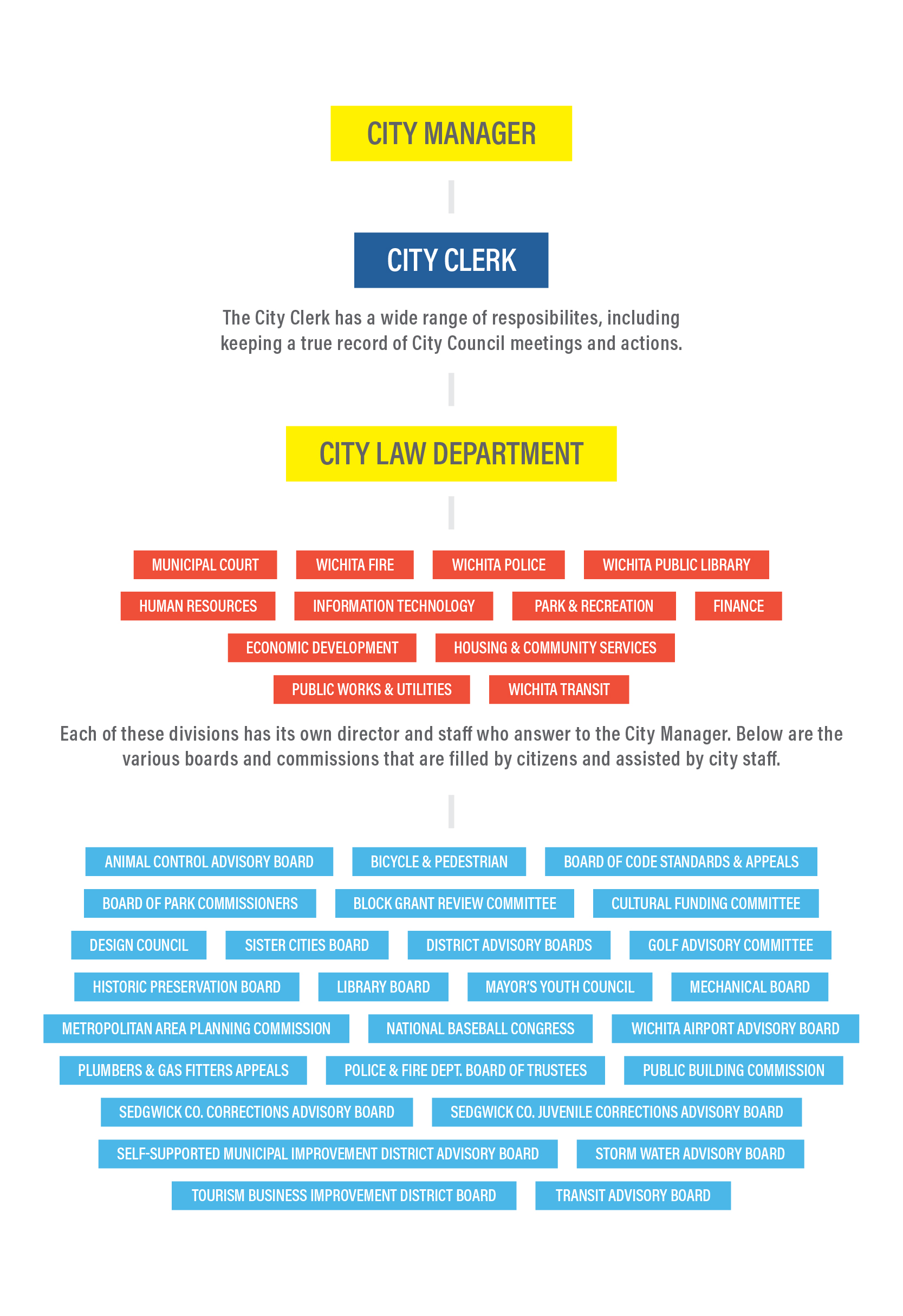 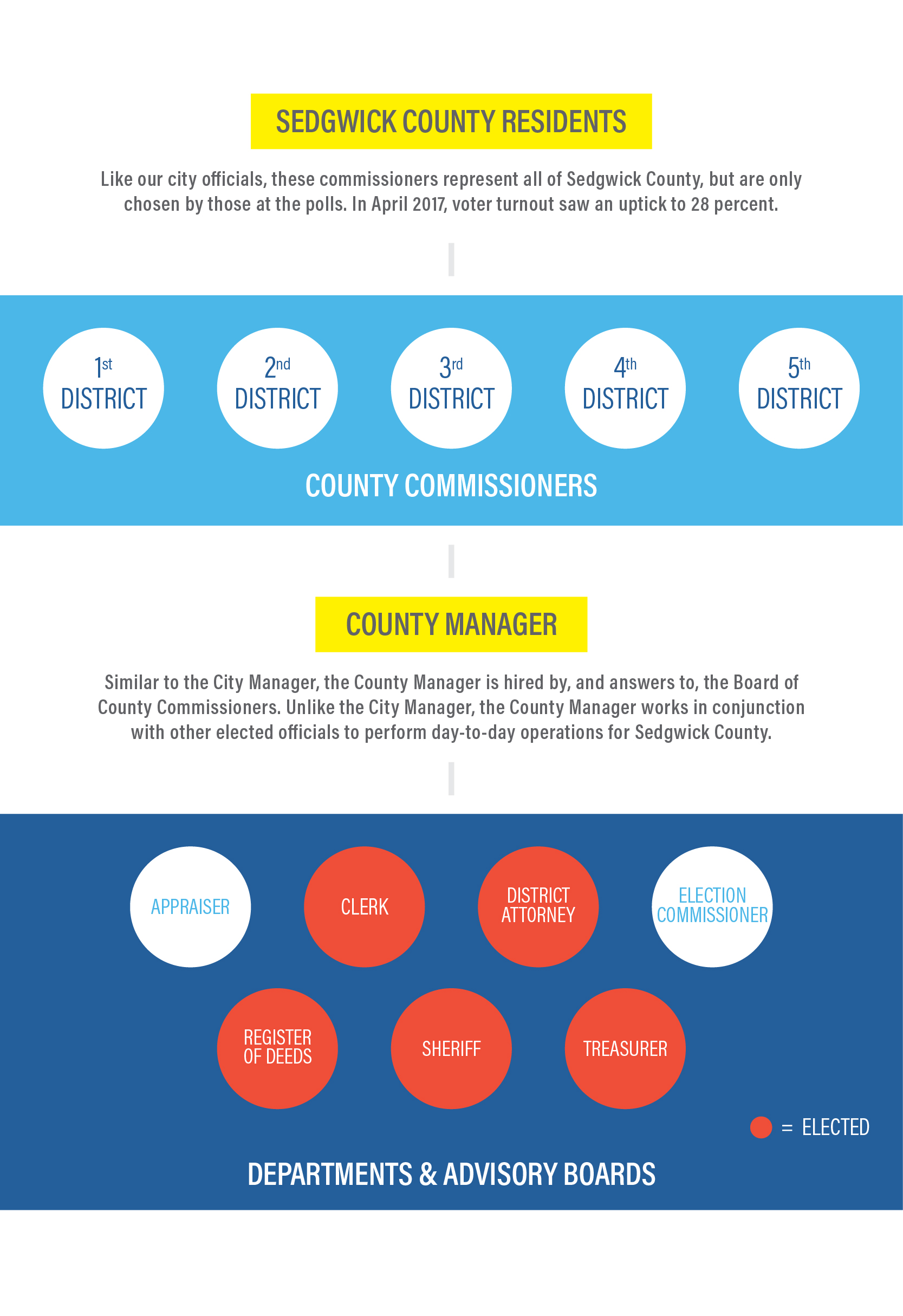 While the city and county oversee totally different parts of the county — both functionally and geographically — there is quite a bit of overlap in Wichita simply because the city takes up so much of Sedgwick County. This chart shows just how much of the Sedgwick County population actually resides in Wichita. Populations are estimated as of 2015 by the United States Census Bureau. 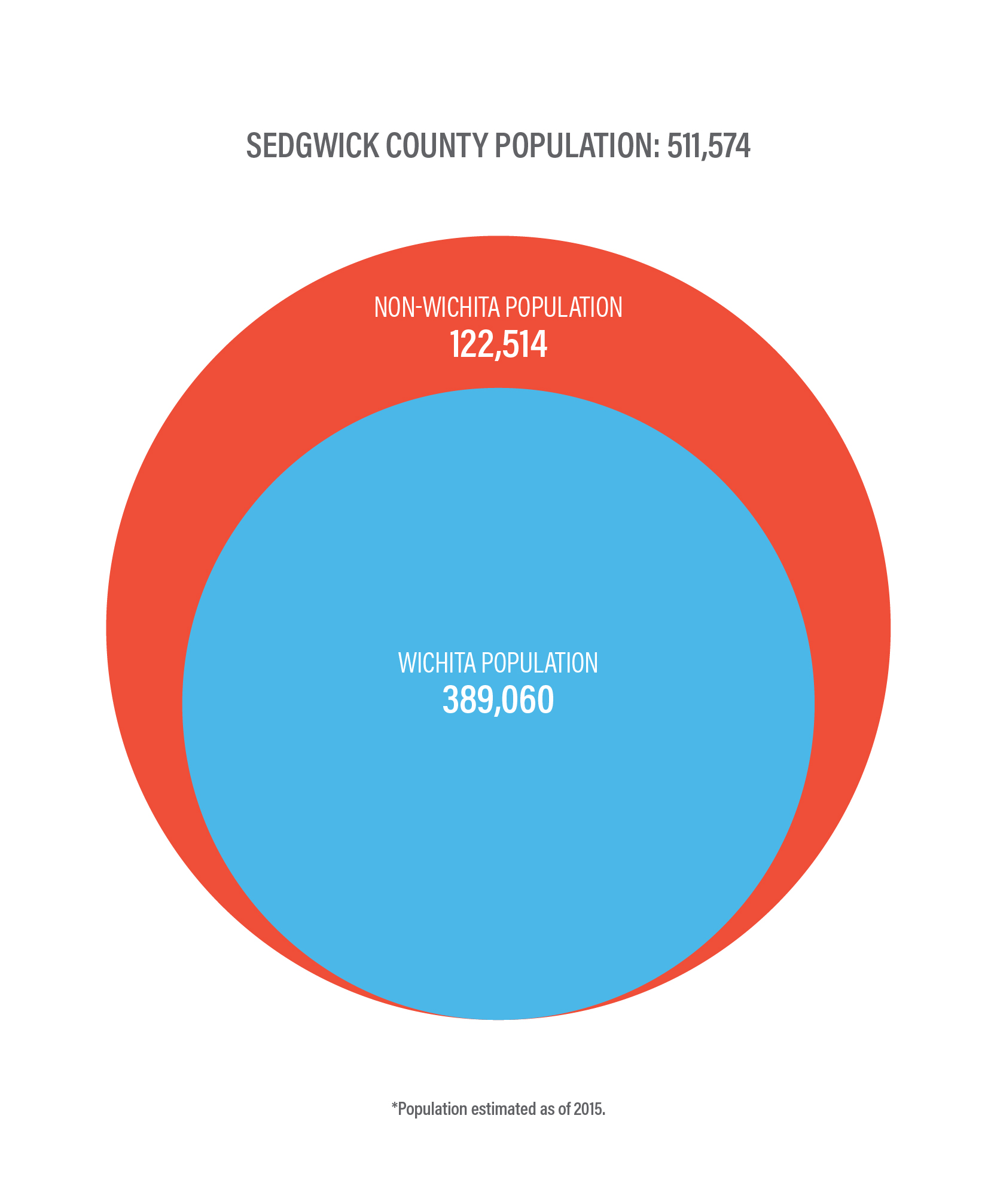 Because of this overlap, the county and city have agreed to co-fund a variety of initiatives and programs, including the Housing Assistance Program. They also jointly run the Metropolitan Area Planning Commission, which is comprised of citizens throughout the county, appointed by elected officials from both the city and county. 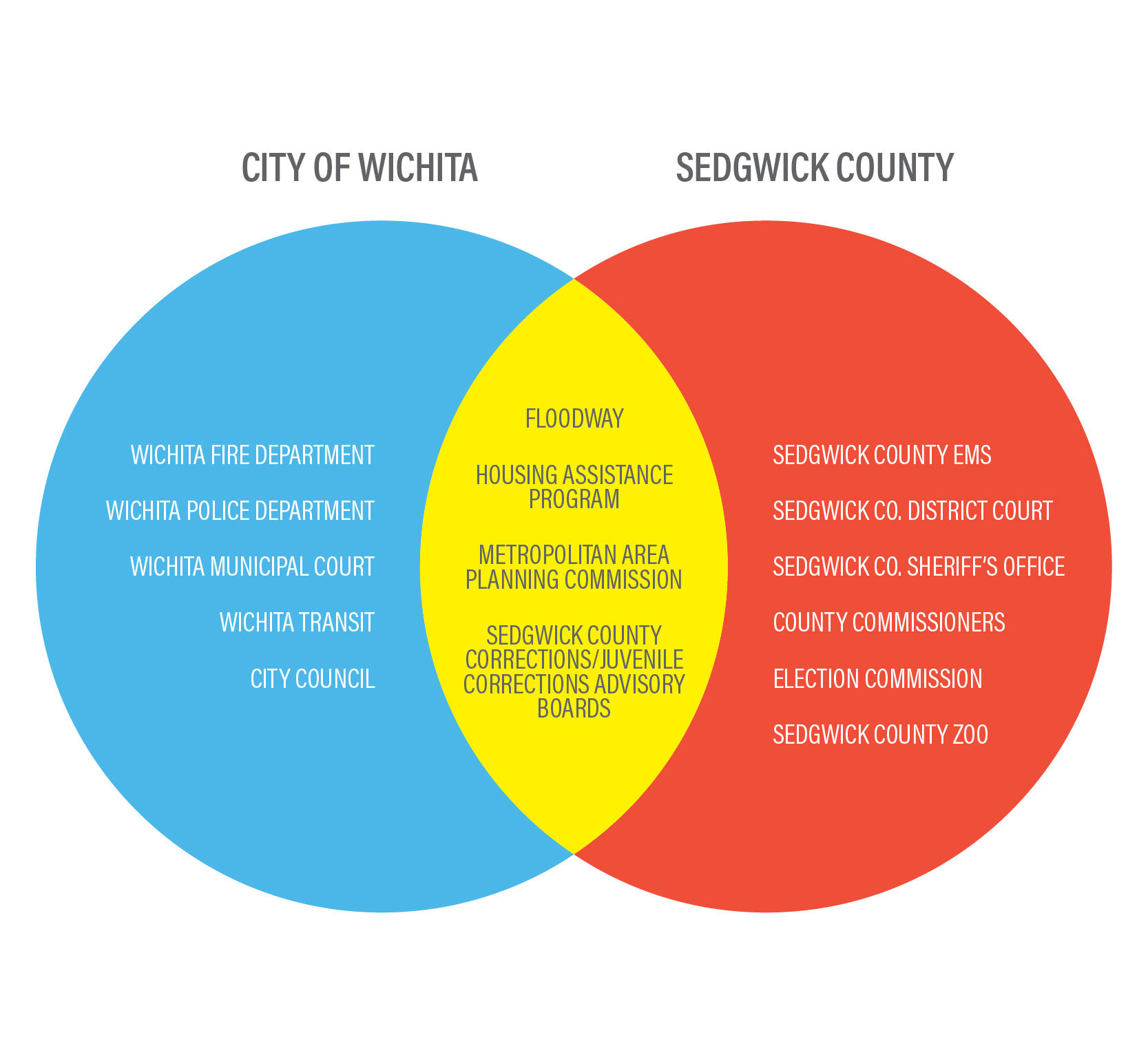 The Wichita School District also operates in a representative format, with school board members elected by the general public. These members then hire a superintendent to oversee the district’s day-to-day operations. 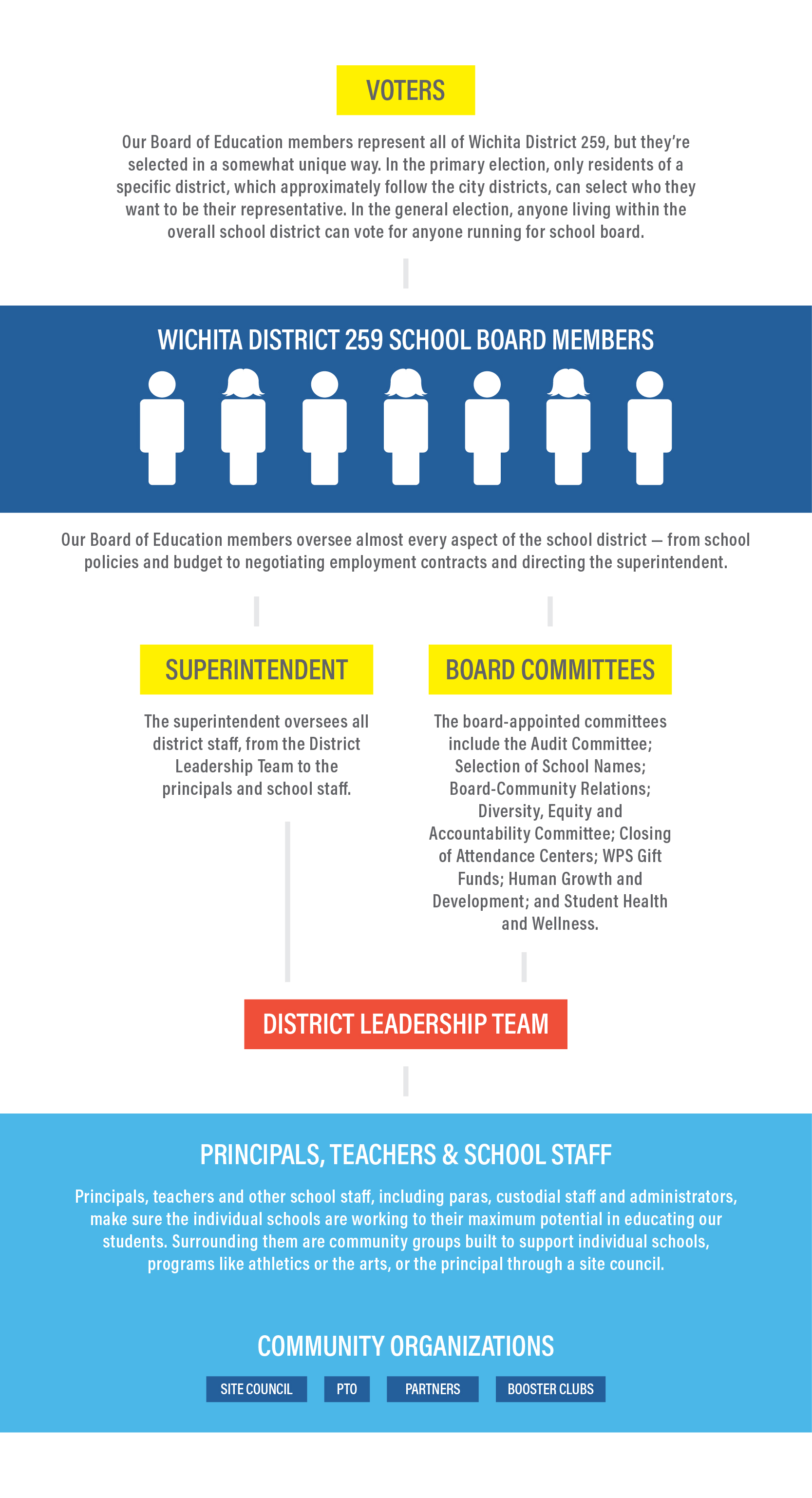 So who gets to vote for whom? And then who do the elected officials represent? Here’s a district map showing which council members represent each district. The mayor is an at-large member of council, meaning he or she represents the entire city and can be found on everyone’s ballot. 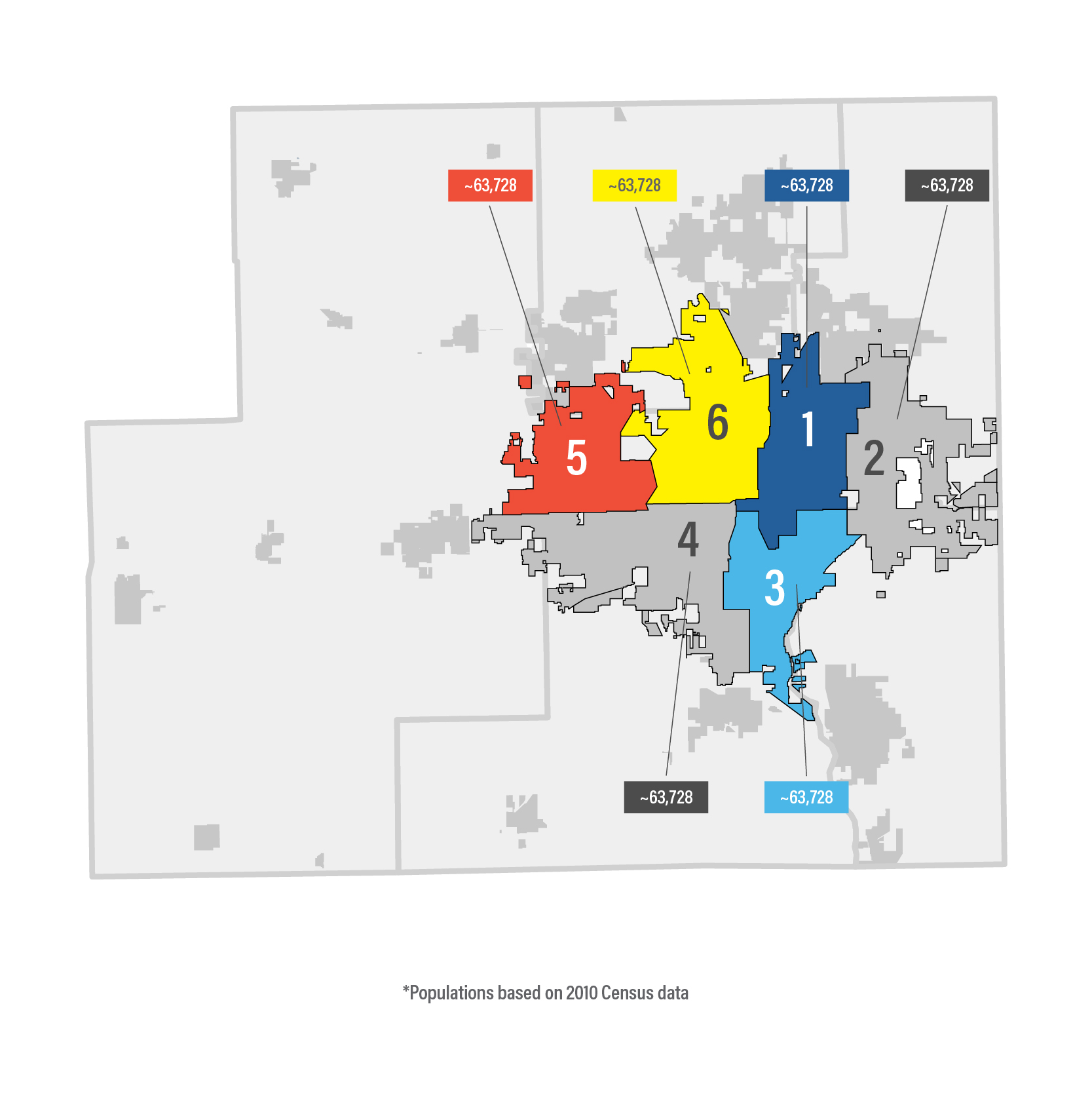 In the county, commissioners represent a larger, but more rural area, including smaller cities like Haysville, Bel Aire and Goddard. 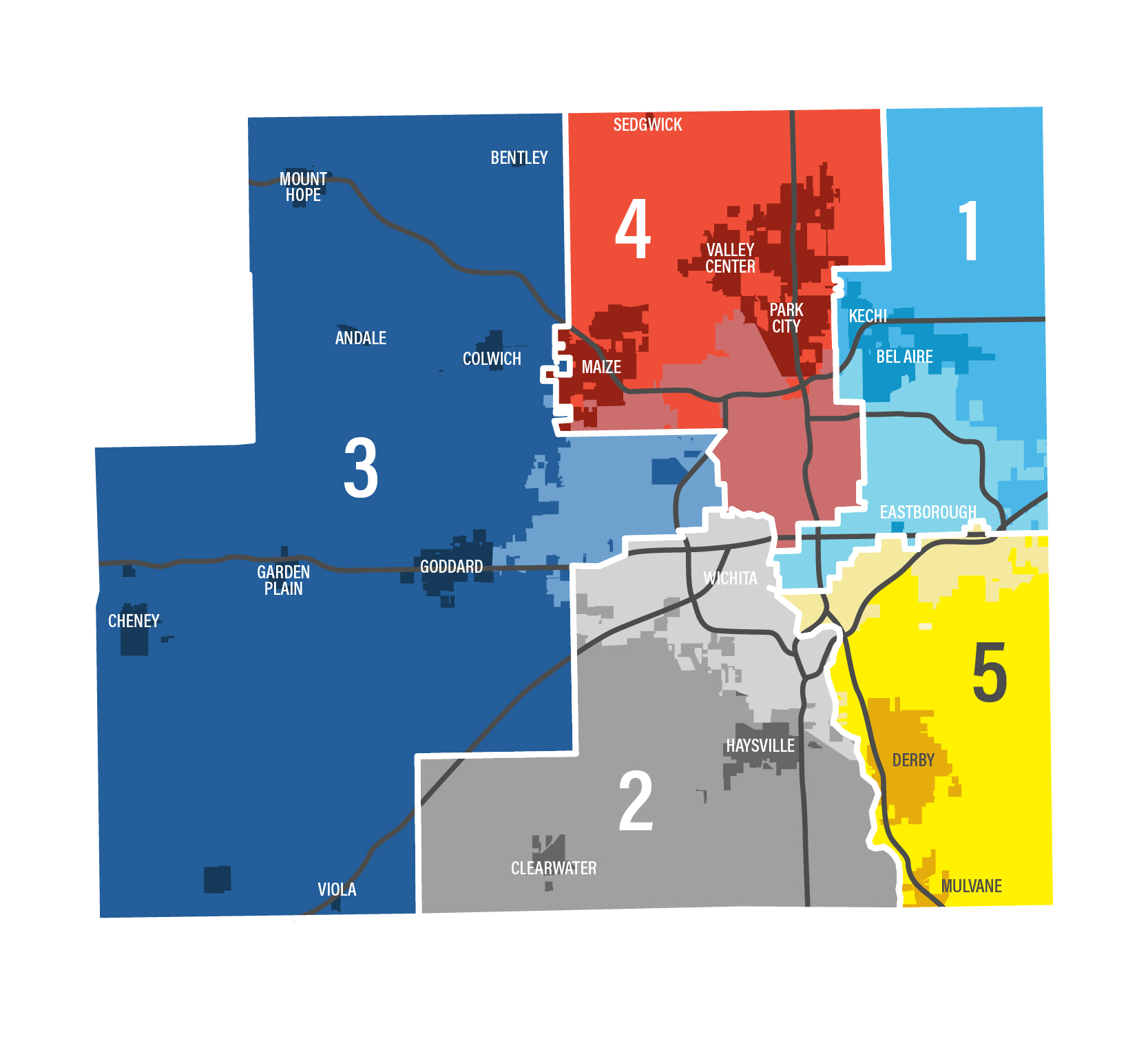 Now that we know who we vote for and what they do, let’s take a look at how a decision might be made. For this example, we’re using the city budget, which is probably one of the most important decisions city officials make each year. 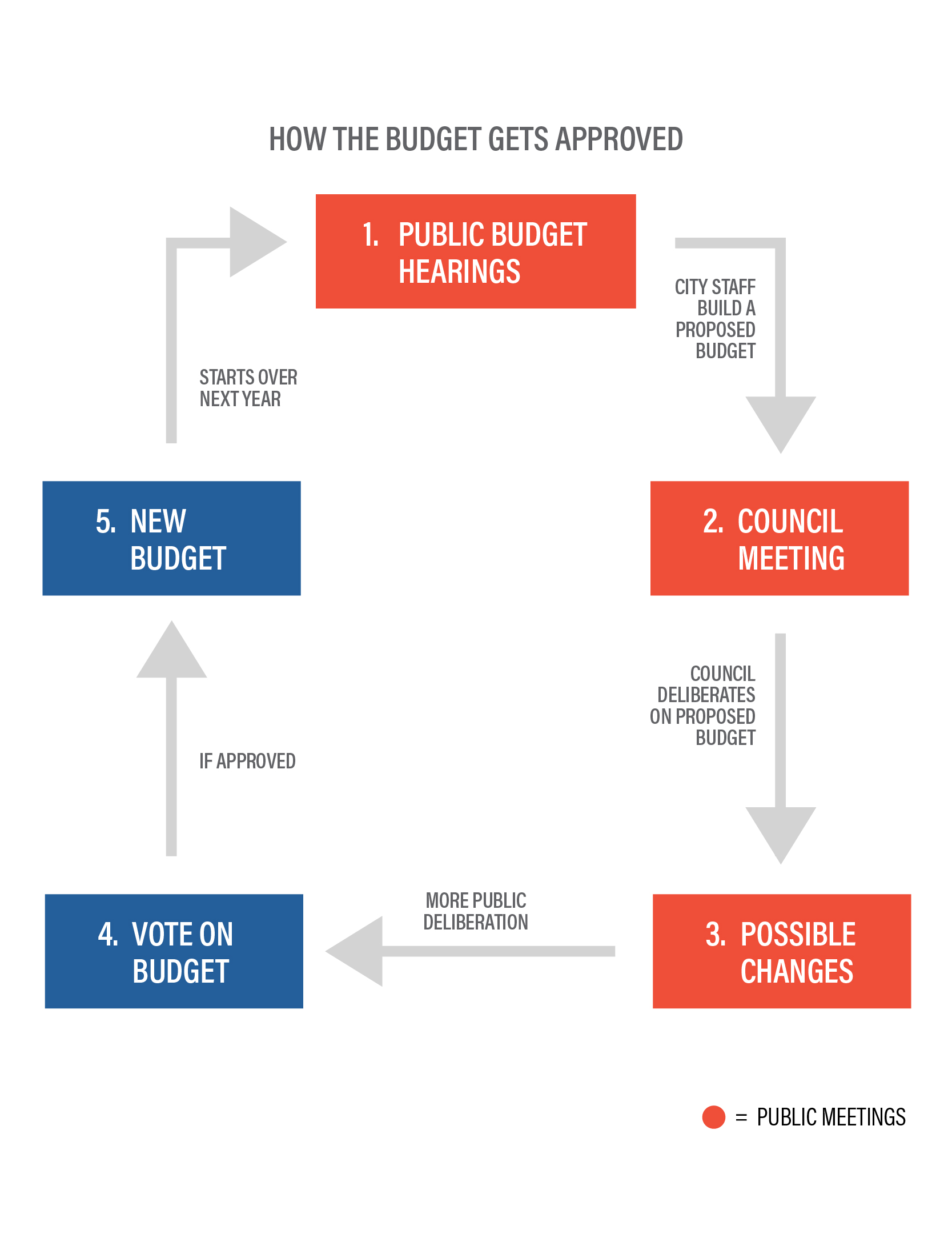 First, the city goes through public budget hearings to review individual department service levels and the cost of providing those services. Once all departments have had their chance to justify their funding requests, proposals are presented to the public for feedback and input, then a proposed budget is put together by the City Manager and city staff. The City Council then votes on that budget, deciding the allocation of funds for each department for the next year. It’s also decided at that point whether taxes should be increased, decreased or remain flat.

The county's process is similar, but with different implications because the county budget is what defines property taxes for everyone in Sedgwick County. These taxes are based on the overall budget needs compared with the property values assessed by an appraiser. 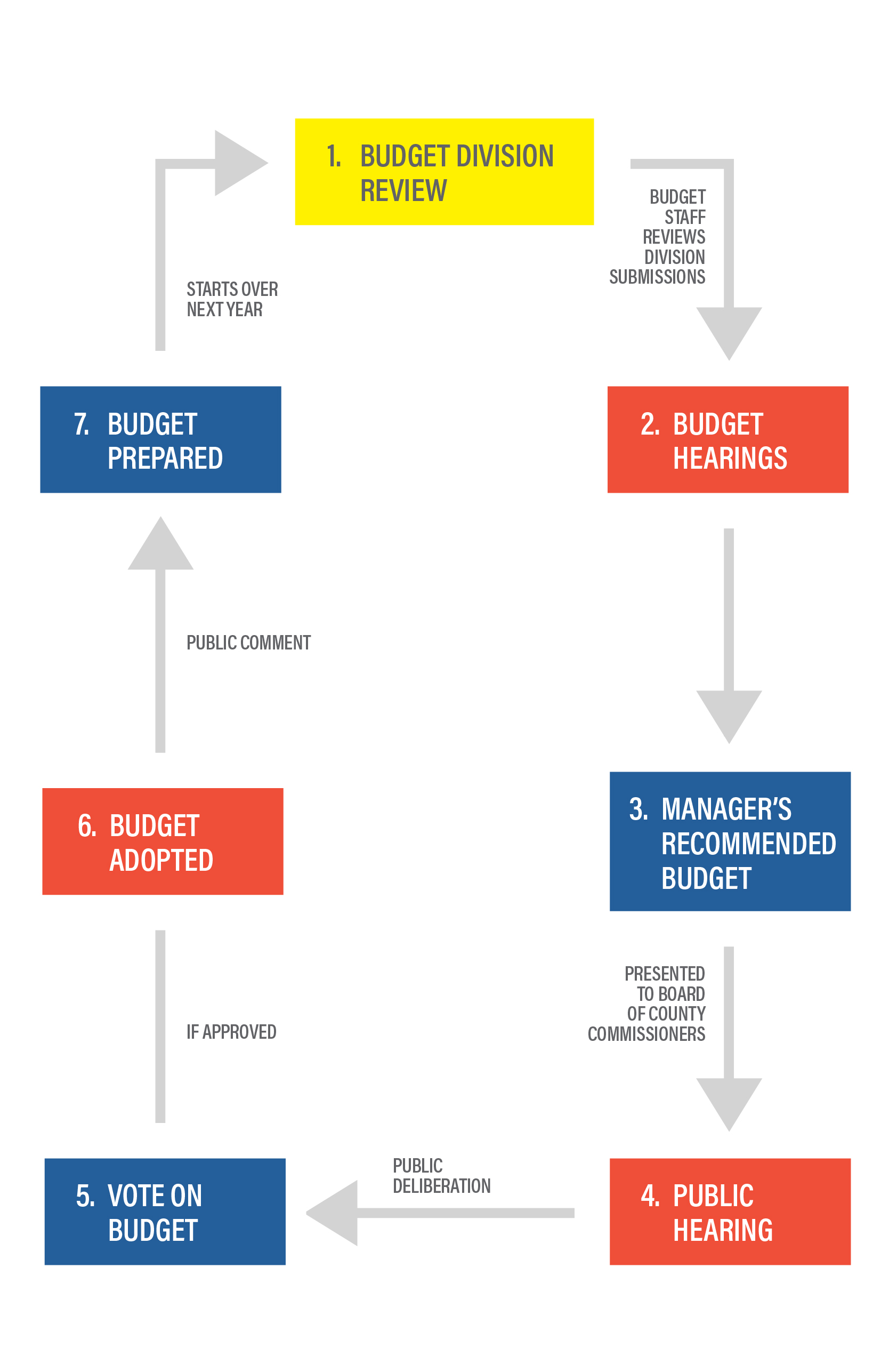 Many blame the appraiser when their taxes go up, but the appraiser only calculates the value of an individual's property, not the taxes they pay. The actual tax rate depends on the county budget and the mill levy. One mill is equal to $1 per $1,000 of appraised property value. So even though the appraiser calculates your property value, the amount of mills is what truly affects your tax.

Learning how our government works is an important step in becoming a more informed and active citizen — and understanding why it’s so important to show up for Election Day.

When more people become informed and exercise their rights at the ballot box, we can find a better way forward for Wichita and its surrounding communities, tackling the Four Challenges through the public sector and beyond.