How do we view our economy? And how does it mesh with the reality around us? We've set up this article to explore just that.

We all know the importance of a strong economy — you can't have a successful city without jobs, a strong tax base and opportunities for advancement for our most-talented individuals. But exactly what that looks like is surprisingly difficult to pin down.

Do we continue putting eggs in our aviation basket, or do we try spreading them around to baskets in technology or health care? Do we support incentives for large employers, or turn them away to other cities that do?

To recap, Reach Advisors analyst James Chung found that Wichita is quick to decline, slow to recover and is still lagging compared to other Midwestern cities and the nation. He also found that Wichita is heavily invested in manufacturing, which has seen a decline in jobs because of higher productivity with fewer people. Together, these issues make up our Business Cycle Challenge.

The way we view the economy is important because it determines the types of policies we vote for, the types of jobs we deem good for our city and — most importantly — how we quantify success.

So how do we view the Wichita economy in its current state? And how does it mesh — or clash — with the reality around us? We've set up this article to explore just that. First, read about how Wichitans view our Business Cycle Challenge. Then, read about how the evidence either supports or refutes our views.


PERCEPTION: THE STANDARD OF 'GOOD.'

As we work through our perceptions of the business cycle, it's important to remember that, while progress of any kind is more good than bad, we need to be thinking comparatively.

For example, we could be improving our economy, but if we're not improving at the rate of other Midwestern cities — most of which had a good head start to begin with — then we're not doing what we need to in order to be successful. We need to measure success by a high standard, not one that gives us a false perception of success.

In the business cycle especially, it seems that Wichitans believe we aren't close to where we need to be to compete with our peers, which include Des Moines, Omaha, Oklahoma City, Kansas City and other mid- to large-sized cities in the Midwest. 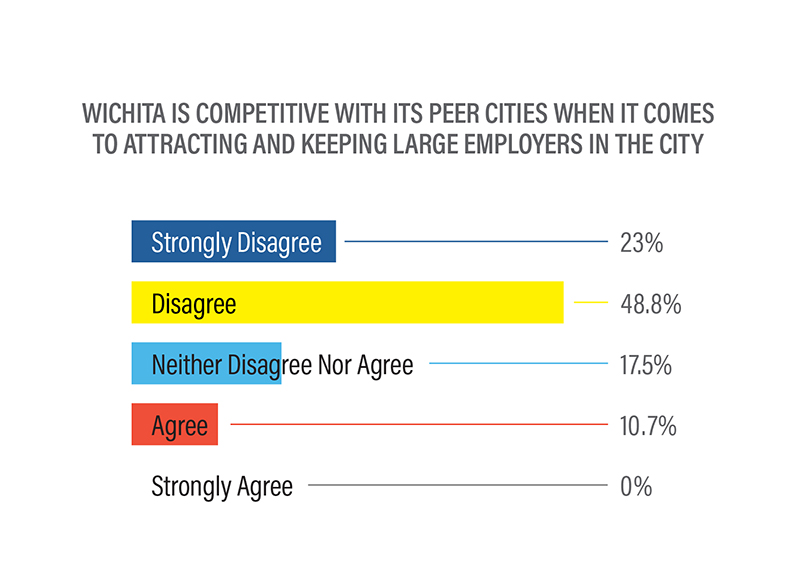 This question was asked in the Four Challenges Survey we conducted in July, which had more than 700 respondents. A total of 78.1 percent of respondents said they either disagreed or strongly disagreed with the idea of Wichita being competitive with its peer cities when it comes to attracting large employers.

Respondents also believed Wichita's economy could be more diverse. Wichita has long been known as the Air Capital of the World, and that moniker isn't likely to go anywhere. But James Chung presented some concerns in his research that Wichita was a bit too dependent on this industry, which he said had a big impact on the ups and downs of our economy. 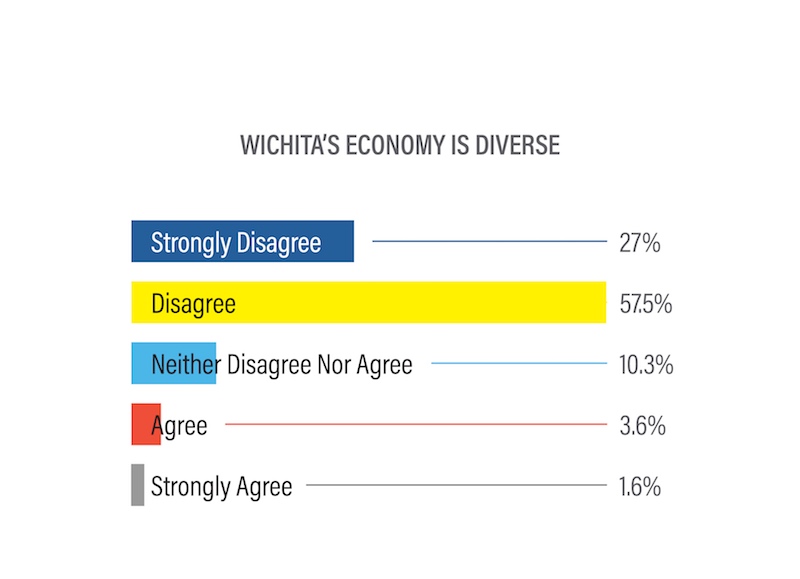 Most of our survey respondents disagreed with the idea that Wichita's economy is diverse enough, showing a concern that we aren't attracting the new industries we need to bolster our strong backbone in aviation manufacturing.

Overall, Wichitans seem somewhat unimpressed by the progress we've made so far in the business cycle challenge. Only 15.4 percent of respondents said they agreed or strongly agreed that Wichita's public-sector leaders are doing all they can to address the business cycle challenge. And only 14.9 percent said they agreed or strongly agreed with the idea of the Wichita community responding well to the challenge. 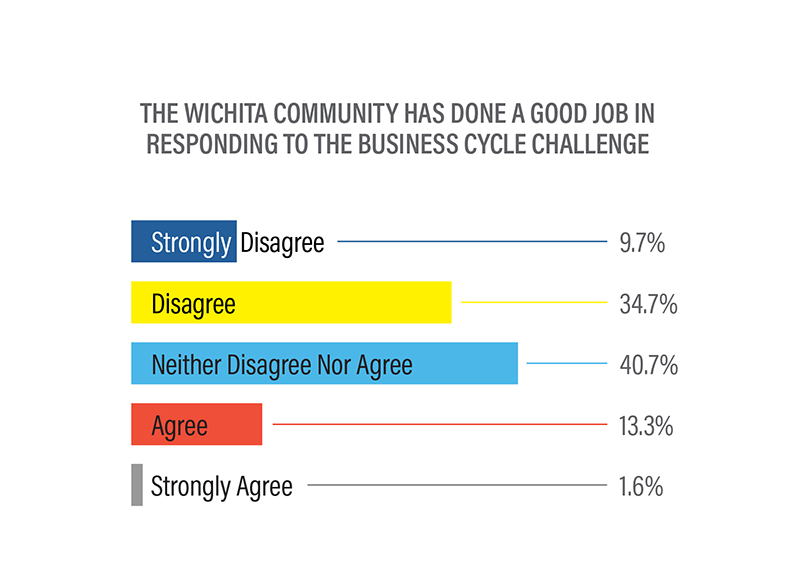 Respondents to our survey indicated a lack of confidence in how Wichita has responded to the Business Cycle Challenge, but that is a perception. What about our reality?

Reality is a tough thing to pin down when it comes to Wichita's economy. Businesses don't act on a whim. They move carefully and methodically, reacting to regional and global trends over a span of years.

With only one year since The Chung Report's launch and two since James' original presentations, it's tough to gauge actual change.

Even so, there are some shining examples of progress:

Data has become an important tool in finding and acting on trends in the public and private sector.

Dole Foods plans to bring hundreds of new jobs to its Wichita plant.

Virginia-based business-outsourcing company Faneuil plans to bring up to 500 new jobs to Wichita.

King of Freight on a hiring spree that could see hundreds added to their payroll.

Whether these examples serve as a turning point or small interruptions in a greater trend of regression has yet to be revealed. While these are all positive stories to reflect on, is it enough to turn the tide? Are the jobs we're creating the right kinds of jobs, and are the businesses we're keeping the right types of businesses?

In Reality Check: Part 1, we talked about the importance of being a bit paranoid and never satisfied with the status quo. As Intel founder Andy Grove once said, "Success breeds complacency. Complacency breeds failure. Only the paranoid succeed."

As our survey indicates, the business cycle is one area where Wichitans are certainly more cautiously paranoid. Next, we'll talk about the perceptions and realities of the Human Capital Challenge, and how these will come to define our future workforce.