In this installment of Startup Diaries, Greenfield Robotics founder Clint Brauer discusses early-stage funding and how it pairs with the development of early prototypes. Check out last week's post to learn more about the team behind Greenfield Robotics.

Carl and I decided late in 2017 to pursue funding for Greenfield Robotics, so we formed a Delaware C Corp. using Clerky.com and put together an initial fundraising deck.

When you have nothing but a deck and an idea, your most likely investors are friends or family.

So I started sharing the deck with close friends in Q1 2018. We procured just enough funding so Carl could start with really crude prototypes in Southern California. We used some SAFE (simple agreement for equity) notes as a simple way to get started with the fundraising.

The idea was to narrow down what might work without spending too many funds. Then, continue to show progress, so we could raise some more funds for more advanced prototypes.

Carl got after it with machine “mock-ups." Six-wheel drive. Two-wheel drive with casters. Four-wheel drive. A PVC pipe chassis. Different clearance levels. Different widths. Different tires. Carl was driving these around his house, yard and eventually some untamed areas. We learned how our next-gen prototypes might steer, the best clearance height, minimum weight and some power data. Every day, some new photo or video from Carl. Honestly, pretty fun stuff for both us and investors.

No one was hurt. Carl’s house and neighborhood were still intact. We were onto something.

Here's a photo of one of our first mock-ups from about a year ago: 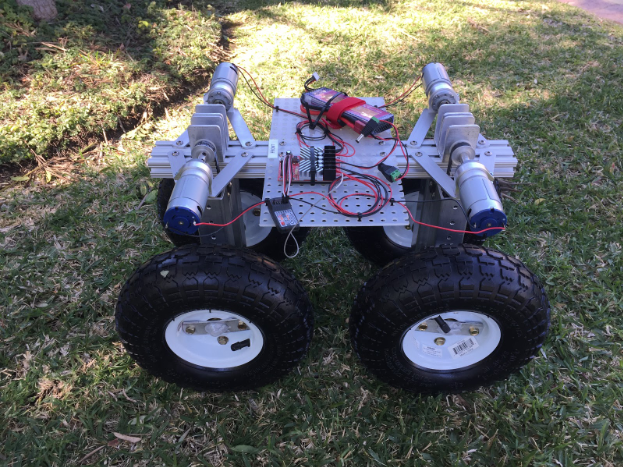 The next stage was the actual weed-control mechanism.

Carl used off-the-shelf parts and machinery to cobble together some tests. You can see a photo of that next-gen prototype below. 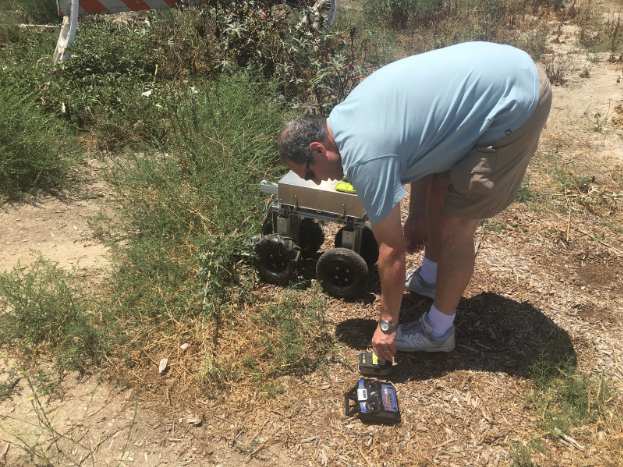 We then continued to raise some more funds and worked toward building some “field-ready” prototypes. Again, we used SAFE notes for just enough capital to get to our next phase.

The idea was simply to control some pigweeds in the 2018 Kansas summer heat. By showing we could actually move through a field and dispatch pigweeds, potential investors could see the possibilities.

So that’s exactly what we did. We had two different machines built with different steering mechanisms, different widths, different drive mechanisms and different tools for eliminating the weeds. We eliminated three-inch wide pigweeds and proved that the devices could handle the terrain and the Kansas summer heat.

In terms of fundraising, we then learned about the existence of the Kansas Angel Tax Credits. At that point, we began raising enough capital to make it through winter and spring and create teleoperated prototypes for next summer.

We have accepted investment from family, friends and people who want to see us succeed, at 25k-50k per investor. Our investors include a farm family in Colorado; the largest wheat seed dealer in North America, in Kansas; the largest Bitcoin miner in North America, in Puerto Rico; and a tech executive in California. Thus far, just one verbal commit in Wichita. The earliest of them received SAFE notes in return, while the later investors have subscription agreements and a valuation range for when the round closes.

In the Midwest, they like really low pre-money valuations. In California, the pre-money valuations are higher. So we have kept the valuation ranged since we are not sure who or where the next influx of funds will come from. This makes it a bit difficult. The idea, or notion, that the “Midwest is different” is misguided. We are not in an isolated world. You have to compete with the companies on the coasts and even globally.

One important part of this process is for potential investors to understand when they are comfortable investing. There are variations on what “pre-seed,” or “seed” — or even “early-stage” means. It is a continuum.

Even within our initial round, the risk keeps changing. During the same round, we have gone from a piece of paper to fourth and fifth prototypes, benchmarking of metrics and can demo how the machine vision software will be utilized.

So even within our initial round of pre-seed and seed fundraising, the risk continues to decline.

A lot of press goes to venture capital groups, family offices and private equity. But without friends, family and individuals who are passionate, a lot of companies would never make it to the starting line.Clint Brauer

A lot of press goes to venture capital groups, family offices and private equity. But without friends, family and individuals who are passionate, a lot of companies would never make it to the starting line.

I have personally worked with multiple startups in return for delayed payment and/or equity at considerably lower rates than normal. Several of those companies have exited or gone on to being successful. One of them is in Wichita and growing quickly.

That’s how it works. You take risks. Sometimes they return, sometimes you have a write-off. But either way, you learn a ton and get to be part of something exciting. By doing so, you will be part of establishing a culture of growth by funding teams with big ideas.