How do we view human capital? And how does it mesh with the reality around us? We've set up this article to explore just that.

For a city, perception is the glue that holds the economy and workforce together. A healthy perception can embolden our will to innovate, buoy our collective attitude and inspire action that moves the community forward.

In small, but important, ways strong perceptions influence people and businesses to move to a city — and cause them to stay. They foster innovation, promote civic engagement and create happiness and well-being among the people that live there.

Reach Advisors analyst James Chung found that Wichita's Perception Challenge is comprised of two parts. The first is a lack of an impactful, authentic identity that supports the notion of Wichita as a city worthy of living and working in. The second is that Wichitans’ longstanding belief that we are overwhelmingly kind-hearted, neighborly people is not entirely accurate.

Understanding how we perceive ourselves allows us to determine the type of shared, inspiring identity that we can all rally behind. And an accurate view of how those outside of the city perceive us is vitally important for defining our competitive advantage over other Midwestern cities who are touting — and living up to — their own strong identities.

So how do we view ourselves? And how does it mesh — or clash — with the reality around us? We've set up this article to explore just that. First, read about how Wichitans view the Perception Challenge. Then, read about how the evidence either supports or refutes their views.

Much more than the Human Capital and Business Cycle Challenges, the Perception Challenge has seen some real perceived progress. Wichitans seem to feel that they are making a difference in creating a new identity.

Calling back to James' original findings, it's not that Wichita has become decidedly nicer, living up to its perception of Midwestern kindness. While it's certainly important to be kind to one another, we don't seem to be banking on that kindness to shape our identity. Based on our Four Challenges survey conducted in July, a sizable group of Wichitans believe we are shaping a more attractive perception, but few would say it's because we've become noticeably nicer.

Instead, here are a few adjectives they used to describe Wichita in its current state. 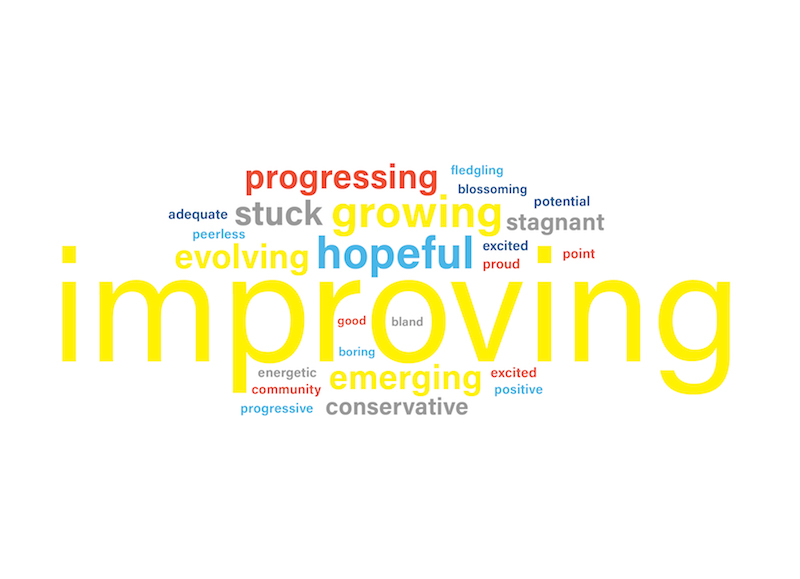 Most of these words — improving, hopeful, evolving — convey some kind of progress, indicating that we're on the precipice of major change in our city.

And instead of in our kindness, we seem to be finding an identity through tangible, quality-of-life upgrades that together fight the negative perception of a sleepy town with that of a bustling city with opportunities for art, entertainment and dining.

Food trucks, new entertainment opportunities like hosting the NCAA basketball tournament, the success of Open Streets and more have together improved the outlook of Wichita's image. Respondents to our survey took note. 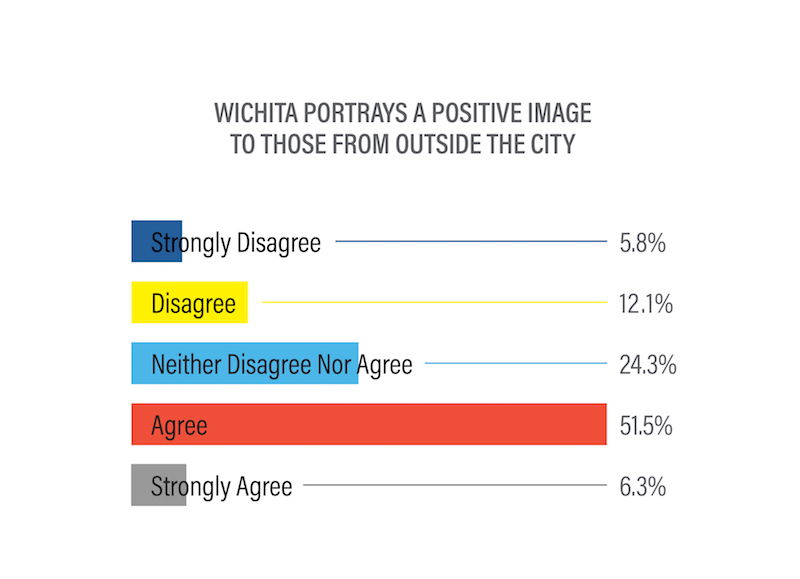 More than 57 percent either agree or strongly agree that Wichita portrays a positive image to those from outside of Wichita.

While tangible progress is important, there are still symbolic points of pride — most notably, the Wichita flag, now flying high across the city.

While symbols are important and interesting, they have to be representing something more than themselves. What does the flag represent when we see it on a T-shirt, or a coffee mug? If it means nothing more than a blind pride in Wichita, what good does that do for our perception?

Largely, the success of our symbols have outpaced our progress — they've outpaced the city they're supposed to be representing. While a successful city flag is great for our perception, we can't let it overshadow the tangible progress that has to happen for sustained prosperity.

Informed by these views and facing these important questions, we turn to see how perception stacks up to reality.

While the Business Cycle and Human Capital challenges can be tough to track year-to-year, perception seems to be improving at every corner.

It’s tempting to chalk up these examples to overall growth and improvement of the city, but they're really caused by a change in perception — a need or want that people have for this type of progress. And the more it happens, the more progress we'll see. But we must always remember that other cities aren't standing still — they aren't waiting for us to catch up. We must work quickly to make big strides to compete with cities that may have had a head start.

While progress is less concrete than unemployment numbers or the number of businesses with 100-plus employees, seeing story after story of improvement can boost the overall civic pride of Wichitans, leading to greater morale and a will to make further improvements.

Here are some examples of real progress in perception:

Wichita's Central Standard Brewing gets national recognition at the "Oscars of Beer."

City pride continues to spread through the Wichita flag, which happens to be one of the best-designed flags in America.

If we agree that improvement and acceptance of quality of life amenities is improving our perception, we can also talk about the impact they have in tackling our Human Capital Challenge. That connection — and human capital's connection to the Business Cycle Challenge — is what makes the Perception Challenge one we never stop working on and one that can never be as simplistic as a community tagline, a logo or a flag.

Next, we will talk about the perceptions and realities of the Entrepreneurship Challenge, and how it works to spur big ideas and get them into the marketplace.