How do we view human capital? And how does it mesh with the reality around us? We've set up this article to explore just that.

In many ways, human capital is the bridge between the business cycle and perception. Businesses require a strong workforce to move into a city, and a city bears the responsibility for building an attractive and unique identity, including amenities like arts, culture and entertainment.

Reach Advisors analyst James Chung found that Wichita's human capital lags compared with other Midwestern cities. In his original presentation, Chung said that if Wichita was behaving like other cities, it would have about 10,000 more workers in their prime earning and spending years, ages 35 to 54. He also found that Wichita hires only 1.8 percent more college graduates than it did 20 years ago. In that same timeframe, the U.S. hiring rate went up by 6.3 percent.

So how do we view Wichita's human capital in its current state? And how does it mesh — or clash — with the reality around us? We've set up this article to explore just that. First, read about how Wichitans view our Human Capital Challenge. Then, see if the evidence supports or refutes our views.


PERCEPTION: THE STANDARD OF 'GOOD.'

As we work through our perceptions of human capital, it's important to remember that while progress of any kind is more good than bad, we need to be thinking comparatively. We could be making progress in attracting a stronger workforce, but if we're not improving at the rate of other Midwestern cities — or if they're pulling workers away from us — we're not going to see ultimate success.

In the Human Capital Challenge, it seems that Wichitans are fairly jaded by the progress they've seen. 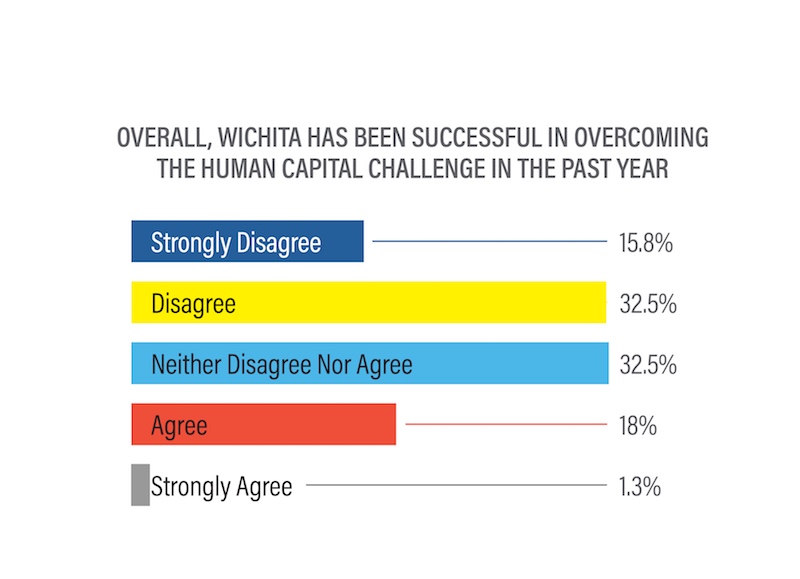 This question was asked in the Four Challenges Survey we conducted in July, which had more than 700 respondents. A total of 48.3 percent of respondents said they either disagreed or strongly disagreed with the idea that Wichita has been successful in combating the Human Capital Challenge in the past year. That wouldn't be so bad except 32.5 percent still didn't agree with the statement, leaving only 19.3 percent to say they agreed or strongly agreed.

Some of the other responses in the survey may explain why Wichitans have this perception. Human capital is a complicated issue with many variables. Attracting a millennial workforce, for instance, takes a different set of tools than attracting a workforce of those from older generations. Millennials cite a need for transportation options, with nearly half of car-owning millennials saying they would be willing to walk or bike given the opportunity. 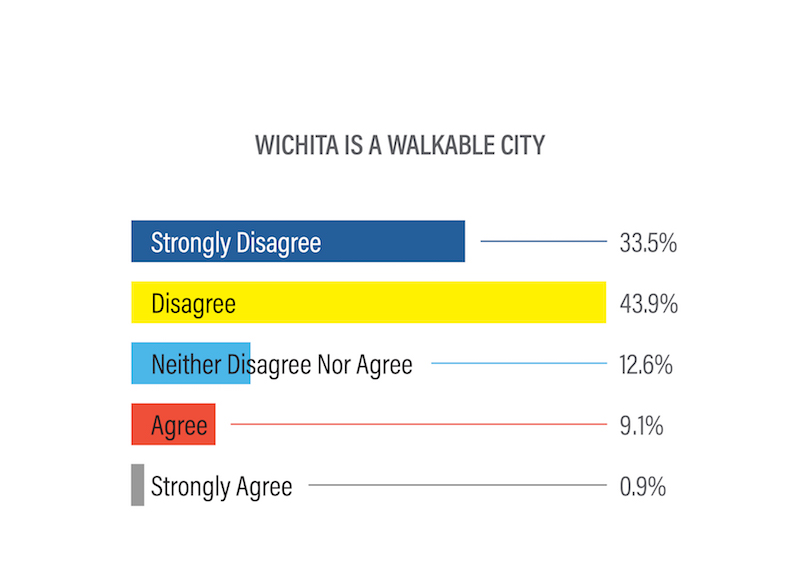 Our respondents believed Wichita is fairly inaccessible on foot, with 77.4 percent saying they either disagreed or strongly disagreed to the idea that Wichita is walkable. This means this aspect of Wichita likely won't attract millennials over other cities that are more progressive when it comes to transportation. And our peers do seem to be more progressive.

WalkScore.com, a website that determines walkability and bikeability for U.S. cities, calls Wichita a "car-dependent city," which means most errands require a car. Cities with scores of 70 to 89 are considered very walkable while scores of 90 to 100 are a "walker's paradise." Wichita scored a 35 on walkability and a 44 on bike infrastructure, meaning the city has minimal bike infrastructure. This same site gave Des Moines and Omaha walk scores of 45 and Cleveland a walk score of 60.

While transportation is important, it won't do much to attract millennials if other aspects of the city make them feel unwelcome. 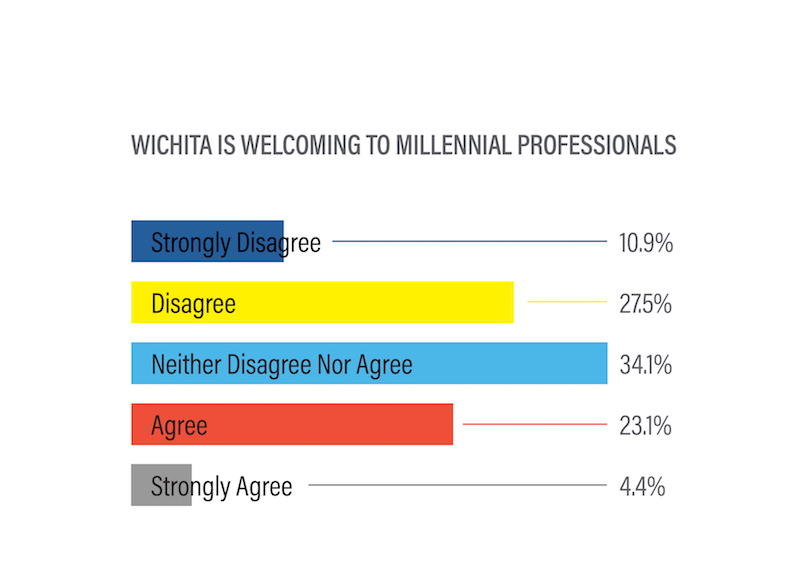 This perception is particularly disturbing because in 2015, the Pew Research Center found that millennials surpassed Generation X as the largest generation in the U.S. workforce. If we're not welcoming to the nation's largest working generation, how do we expect to build a strong workforce that attracts successful businesses?

Together, these perceptions paint an overall bleak picture for Wichita's Human Capital Challenge. But they are only perceptions. What does reality show us?

Just as in the business cycle, reality is a tough thing to gauge for human capital. Our workforce ebbs and flows and doesn't necessarily track with easier-to-track statistics like unemployment. We can watch enrollment numbers at Wichita universities, but that still doesn't guarantee they stay in the city once they graduate.

Here are some examples of real progress in human capital:

Wichita State University ups enrollment by 4.2 percent, bringing in what some are saying is the largest freshman class in school history.

Cargill stays in Wichita, marking confidence in their ability to attract talent within the city.

Virginia-based business-outsourcing company Faneuil plans to bring up to 500 new jobs to Wichita.

Many of these examples are tied closely to the business cycle, as human capital and our economy go hand-in-hand. Whether this is the lasting change we need to see, or small successes that do little to increase Wichita's competitive advantage, is yet to be seen.

As our survey indicates, Wichitans are cautious about making presumptions about the Human Capital Challenge. In the upcoming fourth part of this series, we will talk about the perceptions and realities of the Perception Challenge, and how it works to attract outsiders and better the lives of those already here.

For a simple look at the Human Capital Challenge, check out this short video