In this installment of Startup Diaries, Vytal founders Spencer Steinert and Jared Goering talk through their experience in gaining early investments without losing too much company equity. Check out previous diary entries to learn more about Spencer and Jared, their team and what Vytal aims to accomplish. 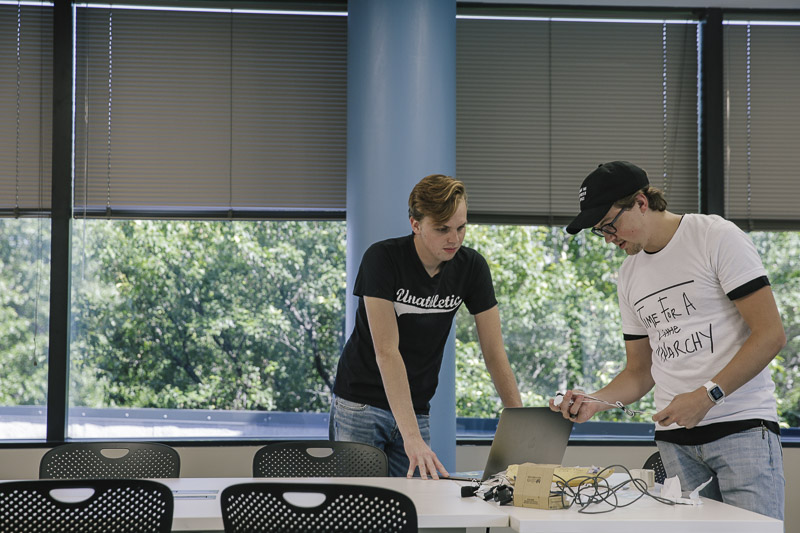 Bringing on funding is not just about getting a check in the mail. It’s a huge commitment between the company and the investors. That’s why it's so important to find an investor with goals similar to yours. We have been told that giving someone equity is like getting married: it’s a lot easier to get into the arrangement than it is to get out of it.

Holding onto equity is something we have been pretty cautious about, and we've been fortunate to get where we are today without giving up too much equity. This path has forced us to be resourceful in where we get funds and how we use those funds.

So far, we have raised a small amount of funding from friends and family. We've also been able to secure a good amount of funding through non-dilutive grants (capital that doesn't require us to give up shares of our business), mostly through competitions like Jumpstart Kansas, the Shocker New Venture Competition and the Kansas Entrepreneurship Challenge.

In this next round of funding, we will look mainly to our network of angel investors, or people who invest their own money into companies. Usually, these types of investments are smaller and earlier than venture capital investments. We are aware of some angel investors in the Wichita region, but the majority of our funding will likely have to be raised from other cities.

Another option is venture capital (VC), or money that is controlled by firms that invest specifically in high-growth companies. We will probably save VC funding for a later time for two reasons. One, VC money is usually in larger amounts than we are currently looking for, and two, VCs usually want to invest in later-stage companies. That being said, we do have connections to some venture capital firms that prefer early-stage companies, so it all depends on whether or not it's a good fit.

Other sources of funding could include the Small Business Innovation Research (SBIR) program and corporate investments. We attended the National SBIR and Innovation Summit this year where we learned a lot about both SBIR and corporations making investments into companies like ours.

This funding would allow us to finalize some of the firmware for the device before we build the mobile software. We would bring another programmer on to work on the mobile app and do some exploration for the concussion management platform. After we have finalized the backend software, we will work with WSU's usability lab to perfect the design of the mobile user interface. After we finish the design, we will develop the front end and get it out to our early users for testing.

Bringing on funding is not just about getting a check in the mail. It’s a huge commitment between the company and the investors.

While we get ready to do our next round of funding, we will continue to search out non-traditional ways to secure money. Last month, we competed in LaunchKC, a grant competition in Kansas City. We were one of 20 companies selected out of more than 400 globally. Although we didn’t walk away with a grant, it was a huge honor to be there, and we made a lot of great regional connections. At the end of October, we will be pitching to a panel of tech scouts from the Department of Defense, so that could also potentially lead to more funding.

There are a lot of resources out there to help in the funding process. Some are a better fit than others. Regardless, we will continue to hunt down every lead and make as many connections as possible to further our mission.