For the next 10 weeks, Spencer Steinert and Jared Goering, who founded human-performance company Vytal while they were still in high school, will be sharing stories, photos and videos from their lives as Wichita tech entrepreneurs.

Join them as they share the ups and downs of running a tech startup in Wichita, alongside a community of young entrepreneurs and systems thinkers at Wichita State University, where Jared and Spencer are both enrolled in the new Master of Innovation Design Program. 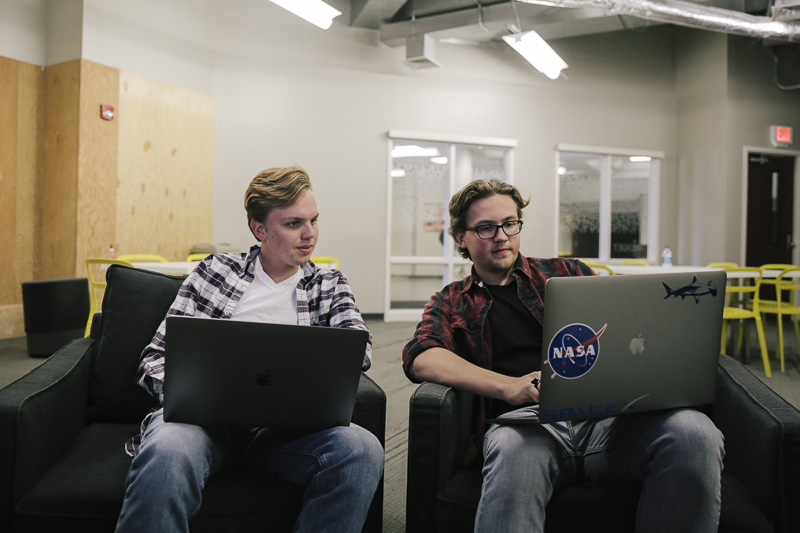 Jared, left, and Spencer are the founders of human-performance company Vytal and the subject of this series of Startup Diaries.

If you have an Apple Watch, or even a high-end Fitbit, you've probably taken advantage of the built-in heart rate monitor. But these aren't accurate enough for the hardcore athletes seeking to push themselves to the pinnacle of human performance. That's where Vytal comes in with its first product, a heart rate and vitals monitor that adheres to the chest and feeds information to a proprietary mobile app.

While this product has the potential to disrupt the larger sports tech market for teams and individual athletes, Vytal has higher goals in human performance — and its founders have higher goals in, well, just about everything.

We sat down with Spencer and Jared to ask some questions about what it takes to get a business off the ground while at the same time keeping up with classes at Wichita State University.

You will be hearing more from Spencer and Jared as they work through the beta test of their first Vytal product and continue brainstorming ideas to change the world.


Could you start by talking a little bit about yourself and your business?

JARED: We started Vytal at 16, so a few years back. I'm 19 now. Basically, Vytal is a human performance and innovation company currently operating in the sports tech market. Hoping to do some cool stuff there. Did I miss anything?

What's it like starting a business while you're in high school?

S: Well, if you grow up in McPherson, Kansas, it's not the norm, so the community didn't really like it. And they really didn't like it when we told them we didn't feel like going to college. We had one teacher who really supported our decisions, so she was very supportive of what we were doing.

What are some of your interests?

S: Whenever I was young, my interests were in art and design — not in being an artist, but how you can design something to make someone feel something. Now I realize it's more of a human factors kind of thing, so how someone experiences a process with you.

About six months into this company, we sat down and started talking about what our long-term interests are. These are the reason we do everything the way that we do it and why we start companies. Education is a big one for me. Another one is integration with technology and biology — starting to make that connection a little more natural. A third one is space, so being able to make space travel more effective and efficient. A fourth is artificial intelligence and machine learning.

So do you see Vytal as an arm of a future umbrella company?

S: I think it is. That's why we call it a human performance and innovation company. It's not just going to be for the athlete. We're kind of using the NASA method of developing one thing for one purpose — astronauts, in their case — and then eventually it'll trickle down and everyone is going to have a microwave in their dorm room.

We have a very grand vision.

J: Yeah, we're really exploring these topics as best we can.

What's it like being out in the world of entrepreneurship at such a young age?

S: The world's problems aren't waiting for us to grow up to tackle them. Age has just never been something we've been concerned about.

J: Especially in Wichita — they've been really great at accepting our age. It's always been a conversation starter, but around here, it's never been a deterrent. I think it's rare to find that outside of Wichita.

What made you guys think up Vytal and its first product?

J: Honestly, I just thought it would be really cool to digitize everything your body does — to be able to record those biometrics and see them. Once you can digitize that, put some analytics behind it, then that becomes really powerful and you can do all kinds of things in all kinds of different markets.

Since that original concept, we've learned that you can't set out to make a device for everyone to wear and have them all wear it tomorrow, so we've zeroed in on the sports and team-tracking market. That's where we are now, and we'll expand from there.

How does this compare to the wearable technology that's out there now?

J: Wearables are in an interesting state right now. The market — from the outside looking in — looks really saturated right now. But we don't want to compare ourselves to a plastic step counter, so we're in the hardcore athlete divisions where they care about accuracy, reliability of data and those really advanced levels of metrics.

So you guys now have a full team based in Chicago. How did that happen?

J: I was researching cardiac technology that was out there. In my research, I came across this guy's work out of the University of Illinois. His thesis work was in cardiac rehab technology, so I started talking to him about that work and really figuring out how we could work together and help each other out.

Now we have a full team based out in Chicago helping us with development.

So you decided you're going to start a business in McPherson, and you weren't going to go to college. And yet here you are in Wichita going to WSU. What brought you here?

S: It all started at Riverfest last year. We were just walking around, taking the day off. We ran into Jacob Wayman and Gary Oborny, who were running the e2e tent. Jacob asked if we had a business idea to pitch, and so we went there and did a quick pitch and by the end of the day he was introducing us to people. Two of the people he introduced us to were Mark Torline, who runs the Center for Entrepreneurship here at WSU, and Jeremy Patterson, who runs the Human Performance Lab here and is also the dean, director and advisor for the institute for interdisciplinary creativity.

Jacob, Mark, Jeremy and really just Wichita as a whole kind of adopted us. When Jeremy offered us the Master of Innovation Design program, we decided it was a great opportunity. Moving to Wichita was the right move to make at the time, and we were here within a week.

What are you hoping to get out of the program?

S: What we like about the Master of Innovation Design is that you go into it with maybe two things that you're pretty good at and a couple other subsets you're alright at. But you come out of that being able to swing on par with anyone in those fields.

The most valuable things you can do to prepare for whatever happens in the next 5-10 years is to be a good leader, a good problem solver and someone who can communicate and identify problems. That's what this program does.

So what does the next year or so look like for you guys?

J: So the next three months are going to be pretty busy. Next month, there will be some Department of Defense tech scouts here that we'll get to pitch for. We're excited about that, because I think there's a lot of implications and applications there. Also, we've got a beta test coming up right around the corner. We'll go out to a university out of New York and test that on a team there and get their feedback.

With that, we'll also be testing here at WSU with Dr. Patterson and the Human Performance Lab. We'll be testing the device, testing the accuracy and validating the data. Once it's validated with studies, we'll be able to expand the beta test to some fairly big teams across the nation.

What do you hope Vytal becomes in the next 5 years?

S: Let's say eight years. In eight years, we're going to put a computer in your brain. It's kind of a mission. It's what we want to do.

Right now, you're limited to how fast you can type with your thumbs, which is terribly slow compared to how fast your brain can think. That's just where Vytal is heading. We have no shortage of ideas.

J: Just a shortage of resources and time.

With so much going on, what's your day-to-day look like?

S: We're very limited on resources and time is our biggest resource, so we have our entire day scheduled out down to five-minute intervals. Even when we get home, the schedule loosely stops, we're expanding our programming knowledge or reading and learning about what happened in the tech world that day.

Morning through evening is business-focused, and then evening until we go to bed is about putting more value behind who we are.

What are your feelings on the state of Wichita's entrepreneurial scene?

J: It's been great for us. If we were here 10 years ago, we wouldn't be here. We wouldn't be doing what we're doing. It's young, but that makes it kind of a cool time to be here. There's lots of potential. Continuing this trend upward, I think is going to be huge and we're off to a good start.

What do you think could improve the outlook of Wichita's startups?

S: To have a successful startup, I think it comes down to a few key things, and I think the first one is making sure you have a vision. If you don't have a vision for what you personally want your business and the people around you to become, don't waste your time. You need to know where you want to go, or else you're going to be playing the "wantrepreneur," not the entrepreneur.

You need to help people. That should be the reason for your venture. It just comes down to whether you want to help a few people a lot or a lot of people a little. Either one is great, but you have to help people.

For the next 10 weeks, Spencer and Jared will update us on their business and their journey. If you, as a reader, have questions for the duo behind Vytal, reach out to The Chung Report via social media or our contact page.